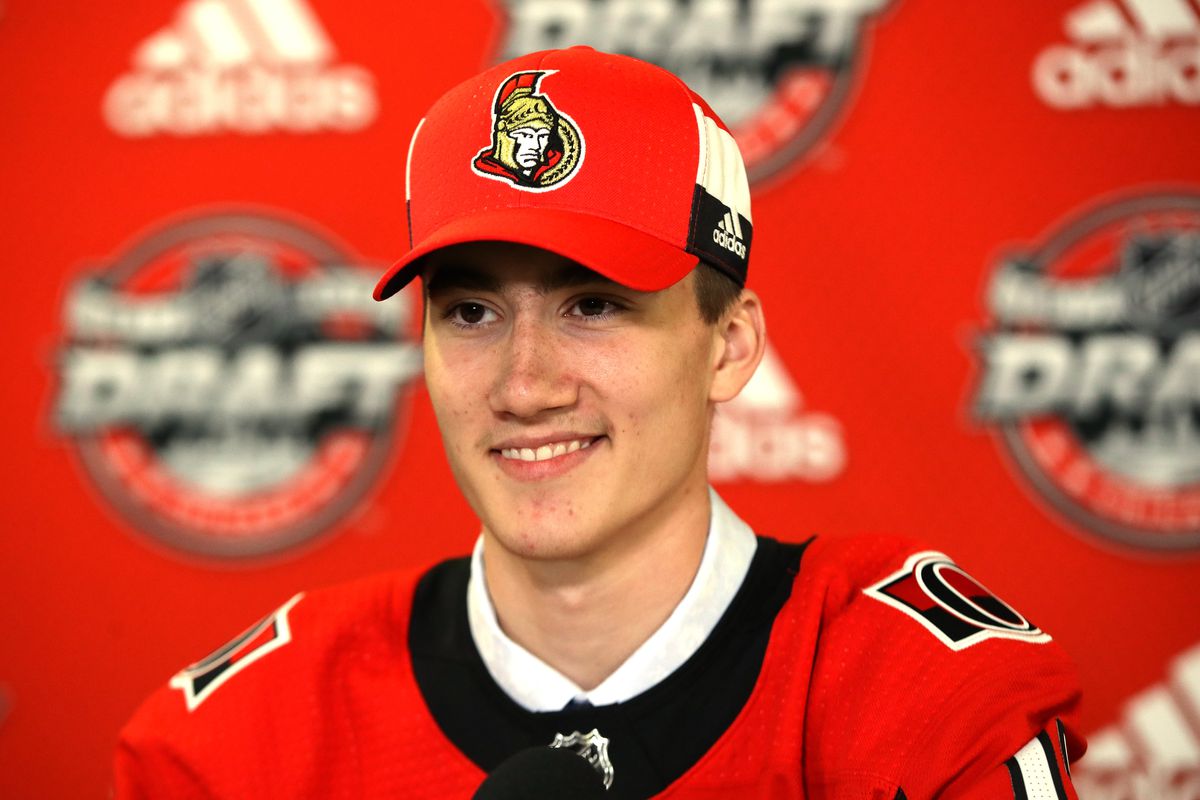 Back again for the third installment of the Ottawa Senators’ drafts in review series! The previous two articles focused on the 2015 (insert link) and the 2016 (insert link) draft classes. If you missed those two, or want to refresh your memory go check them out! As for this article, the third part in this series, will be taking a look back at the 2017 draft class. This draft class is a lot smaller than fans have become used to for the Sens, but it has provided some solid prospects.

The Sens were picking lower in the first round than they usually do in 2017, after their incredible conference finals run (still makes me sad). With that said, it’s tougher to find top end talent the lower into the first round you get. However, the team really missed the boat on this one by trying to make the safe pick in Bowers. The team passed on a much more talented and dynamic prospect in Tolvanen. The Sens ended up trading Bowers as a part of the Matt Duchene trade, kicking off the 2017 draft class with a poor start.

To date, this pick is looking like an absolute steal for the Senators. Formenton absolutely took the AHL by storm in his rookie season, posting 27 goals and 53 points in 61 games. Formenton is arguably the best prospect out of the second round of the 2017 draft. He has become a key prospect in the current rebuild and if he can develop into a top 6 forward the team will be in good shape. The Sens will need to find more prospects like Formenton in this year’s draft with the million second round picks they currently have.

This is arguably the best fourth round pick the Sens have made since drafting Pageau. Batherson’s development since being drafted by the team has been incredible to see. He has dominated the AHL and is well over a point a game in his two seasons with Belleville. The next step for Batherson is to start translating some of that AHL success to the big club. However, as a fourth round pick, if the Sens can get even decent top 6 production out of him at the NHL level this pick is an absolute home run for the team.

Hollett appears to be a bit of a miss by the Sens. He split the crease this season in Medicine Hat with another Sens prospect in Sogaard, and definitely had the worse numbers of the two. In 36 games played this season he went 14 and 19 with a .895 save percentage. Whereas the goaltender selected after him in Primeau, went 17-11 for Laval this season in the AHL with a .908 save percentage. However, with so many goalies in the system, perhaps Chmelevski would’ve been a better pick for the team. He was an absolute force for the 67’s last year and posted 27 points in 42 games in his rookie season in the AHL.

As of right now, it is safe to say the Sens are looking at a 50% success rate on the 2017 draft. They appear to have missed on their first and sixth round picks, but may very well have found gold with Batherson and Formenton. If the two can prove to be difference makers for the team in the future, this draft could end up being a crucial point in the team’s rebuild. However, with so few picks in the 2017 draft, as well as one of those prospects already being traded, the Sens are really relying heavily on Batherson and Formenton to salvage any kind of value from this draft class.

2 thoughts on “Drafts in review part 3”