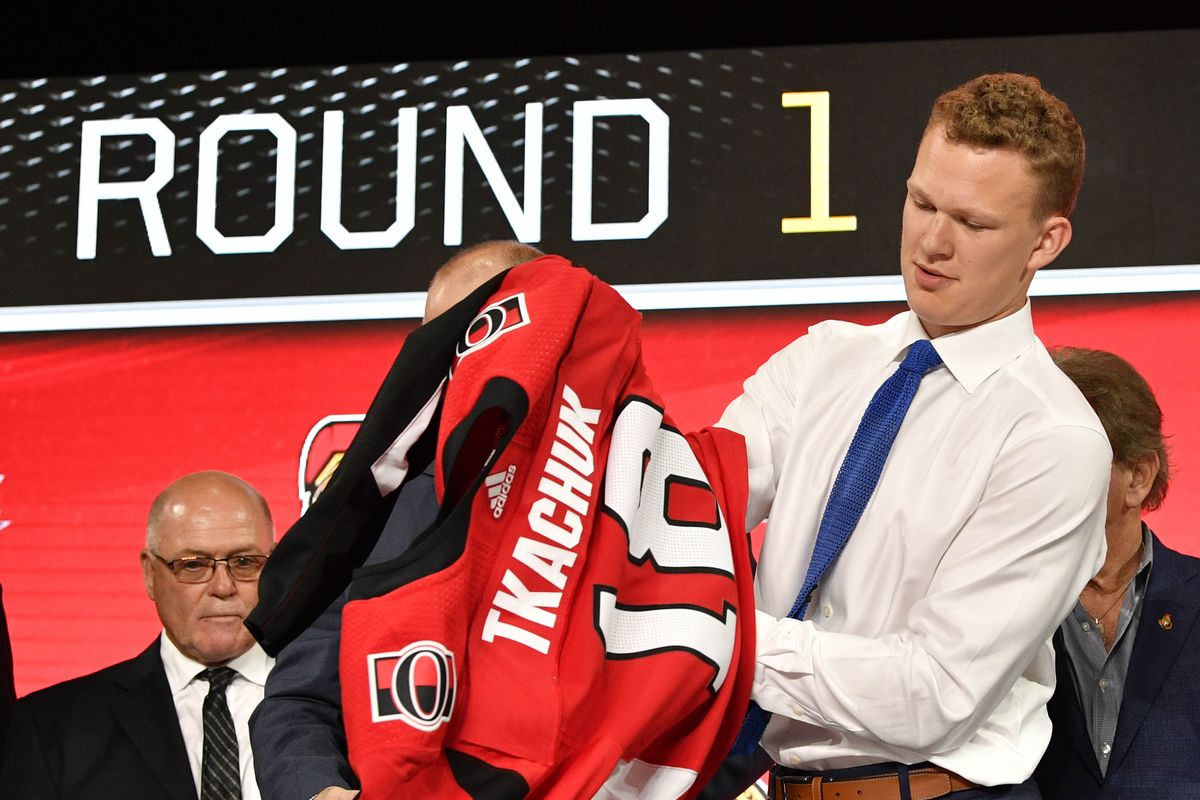 This series makes its return for the final installment until next season, when the draft classes will be re-visited once again and analyzed. If you’ve missed any of the past articles check them out (2015, 2016, 2017). The 2018 draft class is still fairly young and can’t be fully analyzed as conclusively as some of the other drafts in this series. However, it has already yielded some early returns for the team.

The first round of the 2018 draft appears to be a cornerstone of the rebuild so far. Tkachuk stepped into the NHL right away and has made an immediate impact for the team. It is very possible that Tkachuk will be the next captain of the Senators and appears to have the potential to be one of the best power forwards in franchise history. While it would be nice to have gotten an elite defenseman such as Quinn Hughes, the team appears to have gotten a very solid one in Bernard-Docker. If he continues developing at this current pace he will make a great top-4 defenseman for the team and a great pairing with Chabot for years to come.

Unfortunately this pick hasn’t worked out as well as the previous two so far for the team. It is still early enough for Tychonik to get things figured and get his development back on track. However, during his time at the University of North-Dakota he was unable to crack a strong blueline on a consistent basis and was a healthy scratch more often than not. It ultimately culminated in him announcing he would be transferring after this past season. Hopefully he can turn things around, but it would be nice to have a prospect such as Thomas or Bahl in the system right now who appear to be developing better so far.

It is still early to judge the middle and later rounds of a draft that was only two years ago. However, Gruden showed potential at Dev Camp this past summer. He also had a very promising rookie season with the London Knights this year tallying 66 points in 59 games. For now fans will just have to wait and see if Gruden can develop into a valuable piece for the team.

Crookshank was another player that really stood out to me at Dev Camp. At the time we had this to say about him “Angus Crookshank was the biggest surprise of tonight. He was on his game and everyone noticed him on the ice tonight. Despite his small size of 5’10, 181 lb he was driving the net and getting between his defender and the puck. He was also not afraid to go into board battles against bigger players. He also scored a nice finish on the 2 and 0 break. Everytime he was on the ice, his team was creating chances.”Hopefully he can continue developing and getting stronger.

Mandolese had a fantastic season in the QMJHL this past year. He finished the season with a record of 26-8-1 with a save percentage of 0.925. In a league that isn’t exactly known for playing strong defense, these numbers are fantastic for the 6’4” netminder. If he can continue this development arc the Senators could have one of the deepest goalie pipelines in the NHL very soon.

When you get into the seventh round of a draft in the modern NHL the players selected here are usually long term projects so it is tough to grade this round. As of right now none of the prospects selected in this round have made a substantial name for themselves. Novak had a decent season at Bentley University (30 points in 35 games) and has good size at 6’3” and 215lbs. However I’d really like to see him dominate his competition next season before he can be considered anything serious. Loheit also still has a lot to prove as he only tallied six points in 33 games this year in his first season with the University of Minnesota-Duluth.

There is still plenty of time for this draft class to continue developing and improving. As things sit currently though, it appears as if the team can expect two big-time contributors in Tkachuk and JBD for the foreseeable future. I also wouldn’t be surprised to see Mandolese contribute to the team one day whether that be as a player or a trade piece with the surplus of goalies in the organization. Gruden and Crookshank have shown potential and can hopefully be useful bottom six forwards for the team one day. If Tychonik can turn things around then this draft class is looking like a big success for the Sens, but only time will tell.