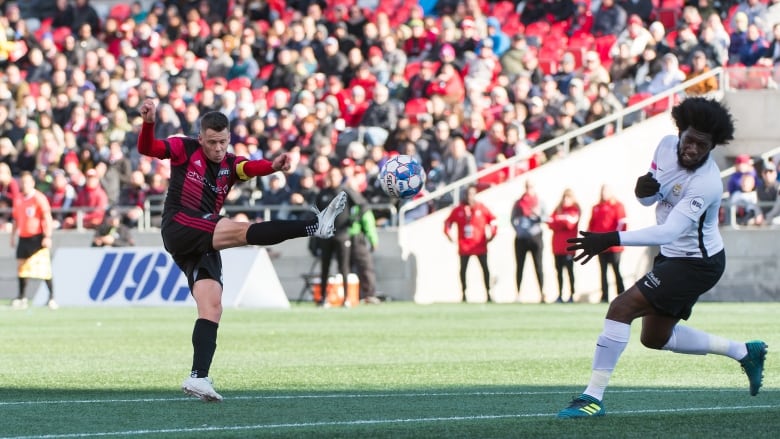 Fury have always been the third team among the OSEG teams and have always been second fiddle to the Redblacks in the summer. However, this season this is all changing as Fury are playing their best soccer that the city has ever seen. Even  since the NASL days, and fans are noticing. The Fury are taking over the city and to be honest are the best team in Ottawa right now.

In their last 15 games (including the Canadian Championship) the Fury have only lost 1 game and have a record of 7-1-7. They also sit 6th place in the East, but are only a win away from 4th place.

This would not be an exaggeration to say that this is our best Fury team since the NASL days.

So what changed? Last year Popovic clearly didn’t have the squad he wanted and was missing key parts to the type of game he wanted to play. Last year and previous years, Fury had trouble scoring in games. They would keep the game close but miss out on multiple chances and then their opposition would grab a late winner and Fury would drop points. This happened enough times that Fury missed the playoffs last season by only 4 points. However, this year it is all different. As Michael Godwin pointed out, the Fury are the 4th highest scoring team thanks to new signings in Wal Fall, Mour Samb and Christiano Francois. A big sleeper point is how Popovic has converted Captain Carl Haworth to Right Back. This change has immensely improved his game so much that he is involved in almost every Fury goal. I hope Canada’s National Team has been taking notes and are planning to call up Haworth soon as he fully deserves that call up. Lastly, in the beginning of the season thoughts were that the Fury defense would be shaky especially with goalkeeper Maxime Crepeau leaving to the Vancouver Whitecaps. Nonetheless, since Irving came back, Fury’s defense has been top notch with Barnathan, Meilleur-Giguère and Attakora holding it down at the center back role. Also, with Tissot, Haworth and Obasi helping with the fullback roles. With this combination of Offense and Defense the Fury can taste the Playoffs already but they must keep pushing.

A big part of this season’s campaign has been the character of the team. Fury have shown a “No Quit Attitude” throughout the season. Even after going down early or late in games Fury have always responded quickly with goals of their own or chances to grab back momentum. As a fan you just know that despite the score line, Fury are still back in it and will score a goal. The whole team has adopted this attitude and it is very clear to see this is what makes the Fury so dangerous. It also explains their 14 games undefeated in 15 games, with a 10 game undefeated run somewhere in there. Because of this success fans are also starting to take notice and fully buy into the team. As the home games progress you can see fans starting to know the player’s names and getting into chants that the Supporters Section lead. The game against Swope Park Rangers had probably the best atmosphere so far this season. Perhaps it was because it was a Saturday Night game or because it was a Patio Party night but the crowd was bouncing and you could tell it was affecting the Swope Park Rangers side and helping the Fury side. Many people were confused and angry at why the Fury didn’t join the CPL but so far the Fury have backed up their case by putting on the best soccer that the city has probably ever seen. As the Fury continue their success the fans will continue to rise and support the team and Fury games will be a must watch event for casual fans.

The next seven matches are against the 15th, 13th, 14th, 12th, 8th, 12th and 18th ranked teams in the conference. If the Fury are able to grab valuable points from these teams it is very possible that the Fury can be sitting in top 3 come playoff time! So let’s continue supporting our team! It’s Fury till I die! Allez Ottawa Allez