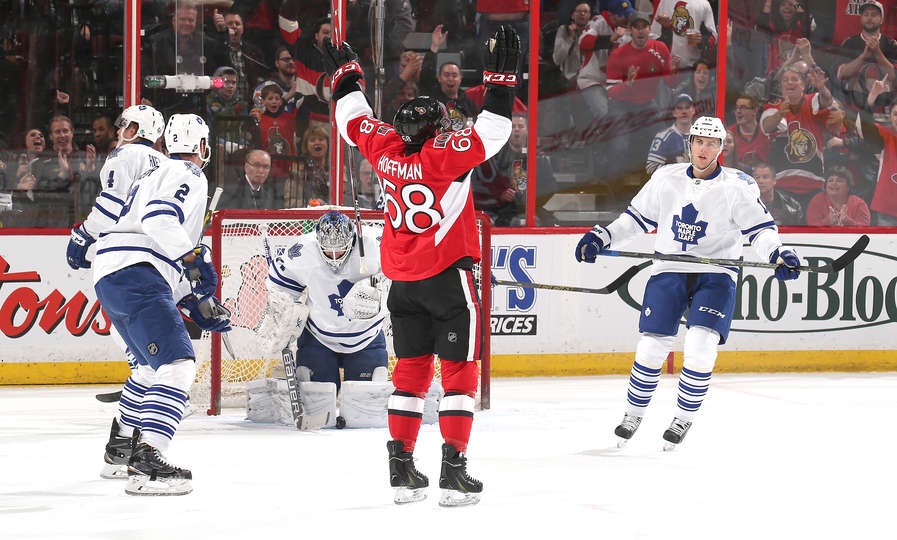 The Sens bye week is finally here. This not only means that the players can rest, but now we can also evaluate the 2018 portion of the season so far. So far in 2018 the Sens have gotten 7 out of 10 available points and are 8 points out of the playoffs as of writing this. Even though they were spanked at home by the Blackhawks, they have beaten Tampa, Toronto and San Jose. So what changed? Well this article will explain what the team is doing different from the 2017 portion of the season.

The first thing, I want to look at is the lines. As of late, the lines are finally looking like an actual good NHL coach is making them. Guy Boucher has finally stopped playing with the lines, and realized that he can have 2 very strong lines and keep it like that. Here are the lines from the Toronto game:

Now I don’t know about you, but other than a couple of lines, the rest are mouth watering. These lines are working too. In the 2018 portion of the season, they have scored 19 goals with 14 of them being scored by the top two lines. In the last 8 games of 2017, the Sens scored 19 goals, so you can see this has been a dramatic increase.

However, not everything has improved. For one goaltending, if not the the same, has gotten worse. The Sens in 2018 have let in 21 goals and this for sure hasn’t helped Anderson’s .899 save percentage or Condon’s .894. Since the Sens switched the roles of the special team coaches, they have gone 1 for 10 (28th) on the powerplay and 8 for 15 (30th) on the penalty kill. The Sens in 2018 have been outscored 21-19. However they have gotten 7 out of a possible 10 points and sit 8 points out of a playoff spot. From what I am seeing so far from 2018, the rest of the season is going to be a shootout. Sens games are going to be high scoring, with high amounts of goals coming from either both teams or just the opposition. If the Sens want to have a serious playoff push, they will need to rely heavily on the first 2 lines for scoring and hope that the defence and goaltending will string a stretch of good games together.

So this brings me to my point. The Sens are at a Centurion Crossroad. They are 5th last in the whole league, yet are 8 points out of the playoffs. So they have a decision to make: Tank and get a good draft seating and draft a very good prospect, or they push for the playoffs and risk losing their Top 10 protected pick. Some fans think they should push and others tank. However, it’s up to the Sens. All I’m going to say, is that based on what we have seen in 2018 so far, if the Sens were to push for the playoffs, they would have to rely solely on their offence, as defensively they wouldn’t be able to keep up. It would be like bringing a knife to a gunfight.

Do you think that the Sens should push for the playoffs? Or do you think they should tank? Also, do you think this offence will keep it up for the rest of the season? Tell us what you think in the comments, our Twitter, Facebook and Reddit. Stay tuned for a midseason prospect pyramid coming soon!!!

One thought on “A Centurion Crossroad”