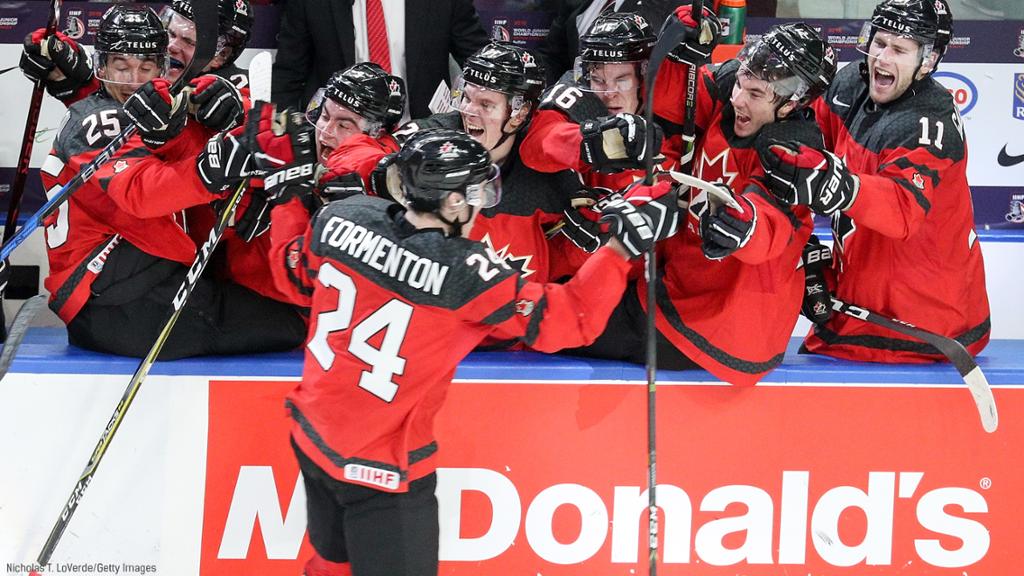 The Ottawa Senators have hit the mid way point of the season and things haven’t exactly gone as planned.  With the Sens much lower in the standings than the organization and fans would like them to be, and the World Juniors fresh in fans memories, what better time to create an updated prospect pyramid? This article will give fans a midseason update of how the Senator’s prospects are performing to date and where they rank in the pyramid. I will also provide a list of a few draft prospects for sens fans to keep an eye on in this year’s upcoming draft. If you haven’t read the first one or would like to see which players have risen/fallen you can check it out here. A quick note before I get into the rankings, Thomas Chabot and Ben Harpur will not be included in this edition as I feel both have played enough NHL games to consider them legitimate NHL players.

The first tier is made up of the best prospects the Sens system has to offer, the cream of the crop. Colin White and Logan Brown hold onto their spots in the top tier throughout the first half of the season and are joined by Filip Chlapik after an exceptional showing to start the season. Colin White has spent the majority of the season on an awful Belleville team, while his point totals are nothing to write home about, according to all reports his on ice play has been exceptional this season and has shown flashes of that potential fans are so excited about. With Nate Thompson getting injured White has been able to get a few games and has shown some flashes even though he’s been saddled with some pretty awful linemates. Logan Brown has been rather impressive so far in the OHL this season tallying 24 points in 15 games and was traded to a strong Kitchener team giving him a chance to win another Memorial Cup title before making a strong push for a roster spot next year. Unfortunately for fans, Brown was injured early in the World Juniors tournament and was held out for most of the tournament. Filip Chlapik has been better than most fans expected to date and has even seen some NHL game action. Chlapik currently sits 5th on Belleville in points (16 in 29 games) and has been one of the Sens better forwards in the 6 games he’s played this season. Look for Chlapik to continue producing in the AHL and hopefully, if Boucher isn’t too stubborn, earn another call-up to the NHL.

Tier 2 has seen a lot of change since the first edition of the Prospect Pyramid, Shane Bowers has since been traded and there have been players demoted from this tier as well as promoted to it. Tier 2 is made up of Marcus Hogberg, Alex Formenton, Drake Batherson, Christian Jaros, and Gabriel Gagne. Marcus Hogberg is the only returning player in tier 2. Hogberg started the year off in the ECHL with the Brampton Beast playing 12 games, winning 6, and sporting a save percentage 0f 0.920. With Andrew Hammond being recalled by Colorado, Hogberg has since been recalled by Belleville and has been impressive winning 2 out of 4 starts on a lackluster team. Hogberg, at this point in time, is the future of the Sens goaltending position and fans should keep a close eye on his development. Alex Formenton and Drake Batherson were both key members of Canada’s World Junior gold medal winning team. Both players were very impressive in their own right, but more on that in a moment. Formenton was able to stay with the Sens out of training camp at the start of the season and even found his way into game action where he was able to showcase his phenomenal speed and give fans a glimpse into what they have to look forward to. He has since been returned to the OHL’s London Knights where he has tallied 22 points in 22 games. Formenton was outstanding for Canada at the World Juniors and was a forchecking machine, he is a very persistent forchecker and constantly hounded opposing team’s defenseman generating turnovers. Drake Batherson had a terrific training camp by all reports and was sent back to the Cape-Breton Screaming Eagles of the QMJHL where he would take the league by storm tallying 39 points in 24 games before suffering a similar injury to Marc Methot’s from last season, sidelining him until the World Junior pre-tournament action. Batherson would go on to have a phenomenal tournament showing fans what a force he can be on the powerplay, especially in front of the net. Which should provide fans with the comfort of knowing that at least when one day, the team loses Alex Burrows phenomenal net front presence on the powerplay, at least the organization will have players like Batherson to rely on. Christian Jaros has also been impressive so far this season, earning a promotion from tier 3 to tier 2. He had quite the training camp and had fans intrigued by his abilities, earning himself 2 games in the NHL so far this season. In 26 AHL games this season Jaros has notched 10 points and leads defensmen on the team with 55 shots on net. In my opinion, Jaros’ play so far this season has made him more deserving of a call-up then Ben Harpur. Gabriel Gagne has been a frustrating prospect for the past few seasons, but is finally showing signs of hope. Gagne has been exceptional so far in the AHL this season playing with Filip Chlapik. Gagne has already blown away his points and goal totals from last season, tallying 15 points and 12 goals in 37 games compared to 2 goals in 41 games last season. He is finally showing fans the amazing goal scoring ability management was raving about when they made him a second round pick at the 2015 draft. Gagne is finally giving fans a reason to be optimistic about his development and can hopefully see some NHL game action before the end of the season.

Tier 3 sees many familiar faces from the summer’s prospect pyramid as well as a new signing. This tier is made up by Andreus Englund, Nick Paul, Filip Ahl, Max Lajoie, Francis Perron, and Aaron Luchuk. Andreus Englund begun the season in the second tier  and has since been demoted as I feel his play has left quite a bit to be desired. While I am a big fan of Englund, I just find myself wishing to see more from him. His 0 goals in 37 games so far this season is definitely not helping his case. Nick Paul has been rather disappointing once again. For some reason he just can not seem to put up any substantial point totals in the AHL and if he can’t prove to the NHL staff that he deserves a call-up he’s never going to get any significant NHL playing time. While Paul looked ok in his NHL game action so far this season and is most likely a better and cheaper option than someone like Burrows or Pyatt he hasn’t shown enough to make himself valuable enough to the team. Paul’s time is running out with this organization and needs to get his game together. Tier 3 is not all dark and gloom, Lajoie remains an intriguing prospect on the Sens blueline and is someone fans should keep an eye on in Belleville for the rest of the season. His play has been impressive and he is developing into a nice prospect for the team. Perron has been another bright spot in Belleville this season, he has finally regained some of his scoring touch fans were so excited about coming out of junior. Perron has been putting together quite the highlight reel of assists and is having himself a nice season. Aaron Luchuk, the Sens newest prospect has been tearing apart the OHL this season. Luchuk who was signed by the Sens to an entry level contract a few weeks ago has dominated the OHL in his overage year tallying 63 points (34 goals) in 41 games, good enough for 2nd in the league in points. Luchuk has also been teammates with Sens prospect Logan Brown for multiple seasons before both players were traded by Windsor this year. Luchuk will be an interesting prospect for fans to track the rest of this season as well as next year in the AHL.

Tier 4 once again sees some intriguing options for fans to keep an eye on going forward, but shouldn’t bet the future of the franchise on. This tier is made up by Jordan Hollett, Todd Burgess, Markus Nurmi, Christian Wolanin, Joey Daccord, Miles Gendron, Shane Eiserman, Macoy Erkamps, and Kelly Summers. You may remember Markus Nurmi as a member of Team Finland from the World Juniors. Nurmi was often found fighting for body position in front of the opposing team’s net and was rather good at it with his massive frame, however the rest of Nurmi’s game leaves a lot to be desired. Nurmi may have a future in the NHL, but he has lots of work left to do in developing other aspects of his game if he wishes to see a significant chance at the NHL in the future. Christian Wolanin is another interesting prospect on the blueline and would’ve been most likely ranked in the third tier if not for his age (22). Wolanin has spent the last three season at the U. of North Dakota where it has been impressive to watch his development. Hopefully he signs with the organization soon enough so fans and the team alike can see where his development is really at playing against grown men.

With the Sens floundering for the better part of the past 2 months, we decided it best to provide fans with a few draft prospects to keep an eye on for the rest of the season just in case the Sens can’t right the ship. Obviously the most highly touted player in this year’s draft is Swedish puck moving defenseman Rasmus Dahlin. Dahlin is an outstanding prospect and any team will be lucky to land him in this upcoming draft. Another prospect fans should keep an eye on is Czech born winger Filip Zadina of the Halifax Mooseheads. Zadina was a scoring machine at the World Juniors and his outstanding play has cemented him a spot in the top 5. An additional scoring winger for fans to keep an eye on is Russian winger Andrei Svechnikov. Unfortunately Svechnikov wasn’t used as much as fans would’ve liked to see at the World Juniors as the Russians have a bias to playing their 19 year olds more, regardless of talent level. Fans can keep an eye on Svechnikov and Sens newest prospect Aaron Luchuk as they are now teammates with the OHL’s Barrie Colts. While he is an exceptional offensive talent I am skeptical the Sens would draft him as they seem to have some sort of organizational law against drafting Russian born players. A fourth prospect for fans to keep an eye on is American winger Brady Tkachuk, son of former NHLer Keith Tkachuk and brother of Calgary Flames forward Matthew Tkachuk. Brady was impressive in the World Juniors and is a similar player to his brother. He is a player who forechecks hard, can score goals, and is VERY good at getting under the skin of the opposing team. Fans can watch the rest of Tkachuk’s season at Boston University.

Which defensemen should the Senators protect in the expansion draft?

🚨SUMMER COLLECTION LIVE NOW🚨
Quote of the Week #17
Stay tuned, Summer collection launching THIS WEEK‼️☀️🔥
Quote of the Week #16
🚨 SUMMER DROP COMING SOON 🚨
In case you missed the last game, @alexloughttawa has you covered with his game recap found on 613 Sports