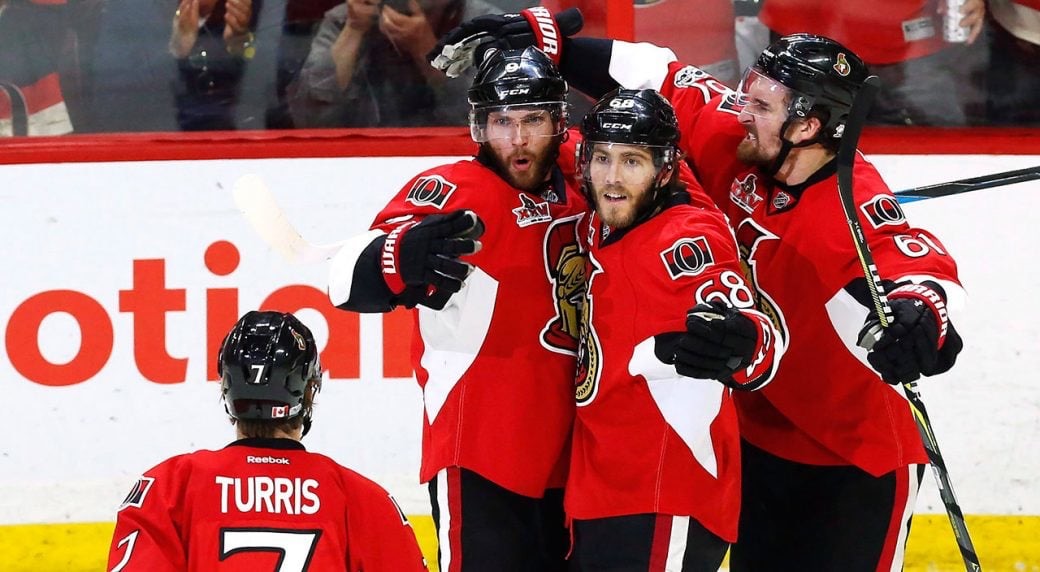 Warning, this following article will mention Game 7 of the Eastern Conference Final. Viewer Discretion is advised
This offseason has been especially tough for Sens fans. I don’t know about you, but during the summer, sometimes when I closed my eyes, I could see Chris Kunitz’s shot going over Anderson’s shoulder, and then the Penguins horn blaring. It’s been tough having that moment as our last hockey memory for the season, but luckily the 2017/18 season has arrived and we can finally get rid of that memory and focus on making better ones!

The Sens finished the preseason with a 3-3 record. Now that doesn’t seem terrible however, the Sens not only lost the last 3 games of the preseason, but they were outscored 22-6. Not a good sign, especially with the season opener coming against the perennial contender Washington Capitals. Speaking about the Caps, let’s fast forward to that game
Ottawa Senators (0-0-0) vs Washington Capitals (0-0-0)

Once the news broke that Erik Karlsson would not be playing in the Season Opener and that Cody Ceci would be our top defenceman against the reigning President Trophy champions, the Washington Capitals, things were not looking good for the Senators. However, to our surprise, the Sens put up a very good fight and put up 4 goals against the Caps however, they let in 4 goals themselves and ended up losing 5-4 in shootout. Now before I talk about the positives of this game, here are some negatives: The Sens had a lead 3 separate times and not only that, they had a 3-1 lead in the third period, and they still managed to lose. Why? Costly turnovers that led to Ovechkin scoring a hatrick. When Ovi is on the ice, you can not leave him open and you can not gift wrap goals for him. However the Sens did and it cost them a point. Another negative is the powerplay. Once again that “O” on the centre of the ice, also stood for the amount of goals we scored on the powerplay. The Sens had 5 opportunities! That’s basically half a period with a man advantage, and you are trying to tell me that you couldn’t score once!? Something needs to change, or else we will be in for a long run. Yes I understand it’s the first game and we shouldn’t read into it too much but, the powerplay has been a problem since last year, and it looks like nothing has changed. I don’t want to be a Debbie Downer, so here are the positives: The Sens scored 4 goals without Karlsson being in the lineup!!! When the news came out that Karlsson wouldn’t be playing many people thought “there goes the Sens offence”. But boy were they wrong. The Brassard – Ryan – Stone line had a hand in all the Sens goals and finally it is looking like the big boys might actually play like their contracts describe their play. That is the biggest positive of the night, and honestly it cancels out all the other negatives.

If you just looked at the box score of this game, you might have agreed with most people that it was a snooze fest. However, if you actually watched the game you would have known that it was actually a very exciting game. Both goalies stood on their heads and had multiple showdowns to see who could make the better save. That explains why it took to the 2:36 mark of the 3rd period for the first goal to be scored. Freddy Claesson in his own zone bobbled the puck and gave it away and Detroit’s Martin Frk capitalized and put the puck in the Sens net. At this moment, many Sens fans were thinking “What the Frk are you doing Claesson” and “Oh boy here is another undeserved loss”. However 45 second later, Dion Phaneuf found his inner Erik Karlsson and stole the puck at the blue line, skated inwards and fired a shot towards Howard that sneaked in. Tie game! And at this point Sens fans were now thinking “Hey, maybe we have a chance”. Overtime solved nothing and once again for the second straight game, the Sens were headed to a shootout, where Detroit’s Frans Nielsen scored the only goal, and the Senators fell 2-1. Yay… Here are the negatives of this game: Remember that 0 in the Sens PPG column from last game? Well that 0 just grew to the size of the “O” at centre ice. The Sens went 0-7 on the power play this game! That’s again about half a period with a man advantage, and you are trying to tell me you can’t score one goal!? This is becoming a serious problem and it needs to be fixed quickly, especially as they are heading on a Western Canada road trip and practice time will be limited. Another negative: It always seems that the Sens start playing offensively, and score in the last minutes of the game, especially when they are down. They did it last year in the playoffs and yesterday they did it again. My question is, why do they not play this way in the beginning of the game? How about instead of playing conservatively, they go out and try to get a goal. We know they can score, we just don’t know why they wait until the last minute. Now onto brighter things, the positives: Anderson looked like the Andy we know and love. He rebounded perfectly from the last game, where he let in 4 goals, and in this game he was lights out. This is very good news for the Sens, as the Sens are going to need another stellar season from him. Another positive is, the Sens got another PWK (Point without Karlsson). Many “experts” predicted that the Sens wouldn’t even get a point with Karlsson out, but what do you know, Sens got another point!

Sens finished the opening weekend with a 0-0-2 record. In my opinion, the Sens should have won both games. But hey look at it on the bright side, we haven’t lost a game in regulation #Knockonwood. Sens powerplay is looking awful, finishing 0-12 but Andy is looking stellar again. The biggest news of this opening week however, is that the Sens are down 2 defenceman. This means that Guy Boucher will have to call up 2 defenceman from Belleville. Will Chabot be one of them? Well you are going to have to find out on the next edition of “The Ottawa Weekly Review”.

Tell us what you think about this week on our Twitter or Facebook or On the comment section and tune in next weekend for the next Weekly Ottawa Senators Review.