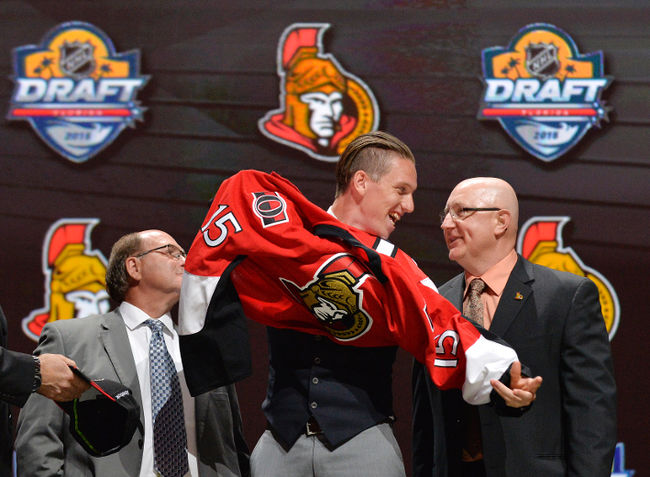 Captain of the Dallas Stars and the 2016 NHL point leader, Jamie Benn has had an illustrious career to date; however, would you believe he was barely drafted? Due to the NHL’s draft eligibility set at the young age of 18, slower developing players like Benn often fall through the cracks as they’re passed up on for players who have developed faster despite their potential. Benn currently has the 2nd most career NHL points out of his draft class, even though there were 128 players selected before him. There are countless other examples of players who nearly missed being drafted that have gone on to have very successful careers for example, Mark Stone of the Ottawa Senators and Pavel Datsyuk, formerly of the Detroit Red Wings. There is a simple fix to this problem, the NHL needs to move the draft age from 18 years old to 19 years old to allow players more time to develop and display their skills. There are players every year who go through this ridiculous process and a change needs to be made. This change will not only help players being drafted, it will also allow NHL teams to do a better job drafting and it will benefit hockey at the minor league level.

Every year a new group of players go through this taxing process. Imagine how stressful it must be to potentially have your entire plans for the future changed for better or worse at such a pivotal age. Many young men at this age are just graduating high school and put all their faith in being drafted and do not have a backup plan. Moving back the age of draft eligibility would allow players another year of planning for their future, possibly attending post-secondary school or even entering the workforce, essentially allowing players another year to plan for the future will allow the thousands of players that never go to the NHL to be more successful later in life. To gather more first hand information, an interview was conducted with Ottawa Junior Senators forward Griffin McGregor, a player who is currently experiencing this process and also has had friends go through it. When McGregor was asked for his thoughts on the current draft age he stated, “The draft age right now is okay but it’s sort of tailor made for those fast developing players who’ve known since they were 5 years old that they were gonna play in the NHL, it doesn’t really give slower developing players like myself a chance to prove ourselves”. Immediately upon being asked about how it has affected his own future McGregor got slightly emotional and admitted that it has certainly changed his outlook on life, “It’s really made me have to think of a more realistic and reasonable career path. Ever since I was young my dream and plan was to one day play professional hockey for a living; however, I feel this current system doesn’t allow me to live up to my full potential and it is extremely disappointing. Pushing back the draft age by simple one year would allow myself and my peers a crucial year of physical and mental maturation.” (McGregor).While this entire process has been very stressful for McGregor and his family, he is not giving up and is currently contemplating playing hockey in Europe professionally after he graduates until he figures things out.

A change of this nature would allow NHL teams to be more successful with their drafting process. Every year only a handful of players make the NHL from each draft class. From the 2000 – 2014 draft classes only 43.6% of players drafted have played even one single NHL game. This is a terrible turnover rate and looks abominable on the part of NHL scouting departments. Not only does this reflect very poorly on the NHL, it is also a terrible use of their extensive resources. Scouting players is not cheap, teams must pay their scouts salary, for their flights to watch prospects, to fly in the prospects for interviews and much more. All this money is being spent, only to have more than half of the players they draft to never get a chance to play in the NHL. Moving back the draft age may be more expensive as it requires payment for an additional year of scouting however, if it results in scouts finding more talent in late rounds of the draft, it would be beneficial financially and in overall depth of teams in the long run. New York Rangers goaltender Henrik Lundqvist was a seventh round selection in the 2000 draft, where he was selected 205th out of 293 players. He has had a very successful career winning the Vezina trophy in 2012 the award for best goalie, Olympic gold and silver medals as well as being a finalist for the ESPN Sports Humanitarian of the year award. Lundqvist also had the sixth best selling jersey in the entire NHL last season, with jerseys selling for approximately $170 USD each. It is evident how quickly this additional revenue stream could benefit the teams. If the draft age was moved back it is extremely likely teams would find more players like Henrik Lundqvist. It is simply a scientific fact that as a young adult your body develops more every year, the jump from 18 to 19 is a big one and if teams were able to see an extra year of a player’s development they would have a much better chance of correctly predicting his future talent level. Allowing teams to see an extra year of development will give them a better chance at finding their own Lundqvist. Essentially, drafting a player is an investment, if the player becomes successful and popular with fans, the player will see an increase in jersey sales which is more money returned on the investment the organization has made.

Making the change from 18 to 19 would also benefit developmental leagues such as the CHL (made up by the OHL, WHL and QMJHL) and NCAA. This change would allow these organizations to keep their star players for longer which would have multiple benefits. Not only would it allow teams to generate more revenue from marketing the players, it would also allow teams to create more exposure for their talented players making them a more well known commodity upon entering the NHL. A good example of this is Calgary Flames forward Matthew Tkachuk, who was selected 6th overall in the 2016 draft. Tkachuk played one season with the London Knights of the Ontario Hockey League before being drafted and making the NHL his first year. Had the draft age been 19, Tkachuk would have had to play at least one more season with London, this would have benefited both parties. Not only would Tkachuk have been able to develop more and prove himself even more, making it very likely he would be drafted even higher then he was which means a higher base salary on his rookie contract. Furthermore, a player of Tkachuk’s caliber sells tickets plain and simple, fans will be more inclined to buy tickets to games if these exceptionally talented players are on the ice. Once fans are at the game, they will be more eager to buy team merchandise, food and drinks which is additional revenue for teams.Also if there are more spectators are at the game, the players will have a better chance of displaying their skills and making a name for themselves.  Additionally, it would help the development of less talented players as well as they are playing against stronger competition improving the overall performance and reputation of the league. If star junior players such as Connor McDavid, Jack Eichel, and Matthew Tkachuk had to play an extra year in the minors, it would improve the overall play of their respective leagues. Players on opposing teams as well as their teammates would improve by playing with them. Opponents would improve due to having to defend these extremely talented players and teammates would improve from getting to see how these exceptional athletes carry themselves, and how they train to be as good as they are. Overall, there would be an outrageous number of benefits for players and organizations alike at the developmental level were the draft age to be pushed back from 18 to 19.

The NHL has a major problem on its hands. With a draft eligibility age being set at such a young age of 18 they are ruining young men’s lives. The NHL is the only major sporting organization in North America with a draft age under 20. There are countless benefits for all parties involved if the draft age were to be pushed back. A change would allow teams the opportunity do a better job at drafting the right player and also would give borderline players more time to make plans for their future, in case they don’t get drafted. Imagine how the parents of these children must feel when it is their child who has had their dreams crushed because they were not allowed to develop to their maximum potential due to a flaw in the system that has prevented them from achieving the goal they’ve been striving towards their entire life.