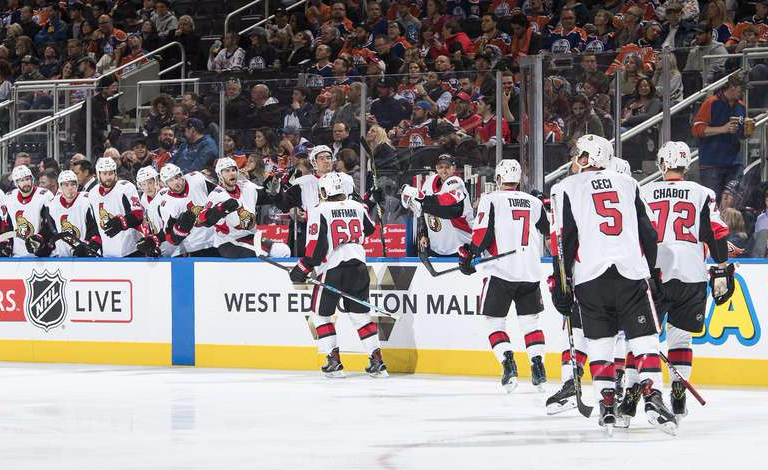 The Ottawa Senators took to the Vancouver Canucks in their first road game of the new season. After two home shootout losses and the loss of two defencemen already, the Senators looked to get their season back on track with a win out west. Vancouver was coming off a very successful home opener, defeating the surging Edmonton Oilers 3-2.

The biggest storyline of the game was Alex Burrows who would be playing his first game in Rogers Arena since being traded to Ottawa, at last year’s trade deadline. Burrows was honoured with a video tribute on the jumbotron during a TV commercial break that featured some of his most important moments as a Canuck, including the game 7 overtime winner he scored against the Blackhawks in 2011 to advance his team to the second round.

The game itself ended in a 2-2 tie, which called for some 3 on 3 overtime that solved nothing, so for the third time in three games for Ottawa, a shootout would decide who gets the extra point. In round 5 Stone would bury the winning goal improving Ottawa’s record to 1-0-2.

The Erik Karlsson-less Senators all but manhandled the Canucks in this game. Shot tallies finished at 42 for Ottawa and 28 for Vancouver. Special teams was a huge discussion point after this game; the penalty kill ran at 100% killing all 4 penalties. The PP was 0/4 on the night adding to the brutal tally of zero goals scored with the man advantage this year.

Something that’s been grazed over here is that with Karlsson, Oduya, and Harpur all unavailable due to injury, Ottawa recalled Thomas Chabot and Christian Jaros from Bellville. They both suited up for the Sens as Guy Boucher dressed 11 forwards and 7 defencemen for this game. Chabot looked very strong and comfortable with what he was doing on the ice. The only thing I wish from him is that he shoots the puck more. Chabot is often not selfish enough with the puck so instead of shooting it he will try to make that extra pass which gets broken up.

All in all it was  huge for Ottawa to get back to their winning ways and gain some momentum heading into the next two games of the road trip.

The second installment of the western Canada road trip brought the Senators to Calgary to take part in Jaromir Jagr’s first ever game as a Flame in the Saddledome. Johnny Oduya did not play for Ottawa which means Jaros and Chabot got their second look at NHL hockey this season. The Flames coming into this one were 3-1-0 after beating the Kings in overtime a few nights before.

SIX to nothing was the final score in favour of Ottawa on Friday. Craig Anderson recorded a 25 save performance to earn his first shutout of the season. Special teams was once again pivotal in this game. Ottawa’s power play has not been good, it’s as simple as that. With the amount of penalties called in the league this month, it is unacceptable to not be able to score on a powerplay for three consecutive games. That first powerplay however that Ottawa got in the first period on Friday, made things looked different. Zone entries were cleaner, puck movement was much better, and because of that, many more shooting lanes were opening up. Ottawa did not score on that powerplay but it did set the bar for the rest of the game.

After 2 periods the score was 2-0 for Ottawa. Ceci got his second of the year with 44 seconds left in the first, and Brassard also got his second with just over a minute left in the second. The start of the third was where the fun began. In the dying seconds of a Jagr hooking call, Hoffman one times it off the bar and in behind Mike Smith, and just like that the curse is broken. Also, Ryan Dzingel scored, getting goals in back to back games. That would put the Sens up by 5. Thomas Chabot got the primary assist and thus his first point with Ottawa this season.

This was a good game with Anderson and Smith both making really impressive saves for the first two periods keeping it low scoring. The third is when Ottawa kicked it into high gear and Smith just couldn’t keep up. After Ottawa’s fifth, he was yanked for Lack who gave up the one to Wideman. I am very impressed with the performance Ottawa put up on Friday and Chabot and Jaros looked great. With Oduya’s return Saturday however, Jaros has unfortunately been sent back to Bellville. Chabot remains with the team.

The last leg of the western Canada road trip brought Ottawa to Edmonton to play a struggling Oilers team. The Oilers should have been a well rested squad having played their last game on Monday October 9th almost a whole week before Saturday’s game. Ottawa was taking part in their first of 19 back to backs this season the most of any NHL team this year. Being on the second half of the back to back meant Mike Condon would get his first start of the season while Talbot started in goal for Edmonton.

The second blowout of the year came at Edmonton’s expense this time as Ottawa took the game 6-1. Condon had a 35 save performance being robbed of the shutout however by Adam Larsson who potted the Oilers only goal halfway through the third. The powerplay struck three out of five times Saturday running at 60% making me and many other Sens fans very happy. Brassard and Wideman also scored power play goals topping off Ottawa’s second six goal performance in two nights.

Something else of note in the scoring department is that Chris Wideman who scored Ottawa’s third power play goal Saturday night leads Ottawa defenseman in goals and points. In the absence of Erik Karlsson the Senators needed new players to step up. Ottawa’s blue line has done an exceptional job at this with Wideman and Ceci leading the charge really boosting the offence from the back end. Thomas Chabot has also looked incredible in the three games he has played. Racking up 2 assists in the three games, Chabot has looked very comfortable at the NHL level, and I feel if Ottawa were to send him down now they would be making a big mistake.

The Senators have some very tough decisions to make this week. In an interview with Sportsnet Guy Boucher was asked if he fully expects Karlsson back in the lineup next week. To that Boucher responded with “yes”. For the past three games Ottawa have been rolling with seven defenceman and eleven forwards. As soon as Karlsson is ready to play, at least one of those defenceman has to come out, but who are you going to scratch. You can’t take out Wideman, he has 3 goals in 5 games, Ceci has also been an offensive machine. As I mentioned before Chabot should not go back down he is ready now. Phaneuf is out of the picture too for obvious reasons. So that leaves it between Claesson and Oduya. Oduya didn’t sign to get waived, and Ottawa isn’t going to pull an experienced guy with 2 cup rings out of the lineup either. So to me that means the only defenceman they can pull out would be Claesson, which is a real shame. Claesson is a young, solid, defensive defenceman and I would love to see him as Karlsson’s partner. We will see how this coming week transpires however for with the organization’s current philosophy I see it more than likely that Chabot will be sent back down.

This past week has been very successful with a 3-0-0 record and Ottawa outscoring opponents 14-3 in regulation across the three games. Despite not having Erik Karlsson in the lineup Ottawa swept western Canada for the first time in franchise history and in a convincing fashion at that. The team leader in points as of today is Kyle Turris with 7 points in 5 games played. Brassard, Wideman, Stone, and Hoffman are all tied for first in goals so far with 3 a peice. Craig Anderson and Mike Condon have both played stellar so far with Anderson boasting a .937 save percentage and and 1.65 goals against average across four games while Condon in his first game had a .972 Sv%. Next week is a fun one with the Sens hosting the Canucks at home on Tuesday, but then they get to play against two of the top teams in the league as the Devils come into town on Thursday and everybody’s least favorite Toronto Maple Leafs visit Saturday for Hockey Night in Canada. Hope to see you around next week with some more great hockey coming our way.

Tell us what you think about this week on our Twitter or Facebook or On the comment section and tune in next weekend for the next Weekly Ottawa Senators Review.