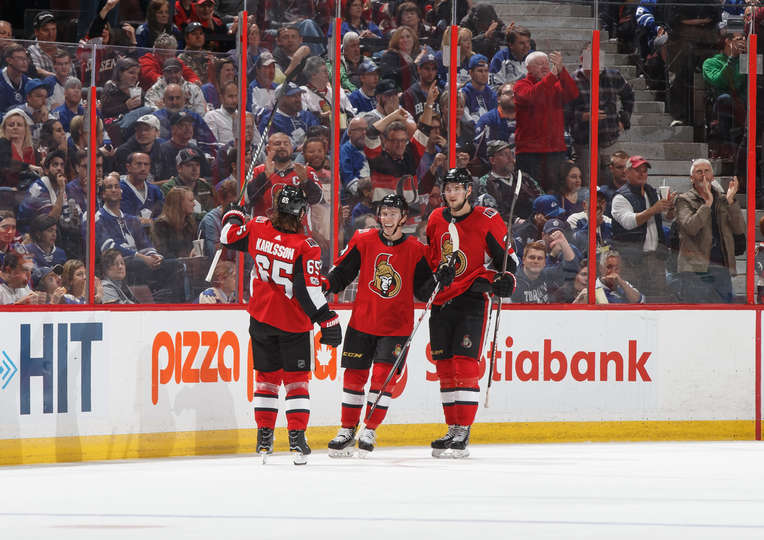 The Ottawa Senators came home from destroying western Canada, to face the Vancouver Canucks. The Sens dominated the Canucks in the first yet found themselves down 1-0. At this point you could sense that it was going to be one of those games that the Sens wouldn’t be able to score in, and that proved to be true as the Canucks went on to win 3-0. Anders Nilsson stopped all 32 shots that Ottawa threw towards him. Ottawa had a lot of great chances, and in almost any other game those shots would have gone in, however, that night luck was not on their side. Negatives of this game were that the Sens allowed their first goal on the PK of the season and that in the second and third periods they were outplayed by the Canucks. Positives are that we outshot the opposition and had great scoring chances and that would help against the Devils, who they would play on Thursday.

The Ottawa Senators were heading into this game after suffering a disappointing 3-0 loss. All the experts were predicting that the Sens would not be able to compete with the speed of the Devils and no one gave them a chance. In the first period it was looking like the experts would be right as the first overall pick Nico Hischier scored twice to grab the Devils a 2-1 lead heading into the intermission. However in the second frame, the Sens would storm back and score 3 goals to take a 4-2 lead. However in the third they would not be able to hold it as the Devils scored twice and won the game in OT. Negatives of this this game were mainly that the Sens blew a 2 goal lead. As of now the points don’t really matter but later in the season, near playoff time, these dropped points could be very important. Another negative is that in OT, Guy Boucher started Ceci over Karlsson. Huh? Why would you not start the greatest defenceman on the planet, someone who got 3 assists in that one game? Makes no sense, and it most likely cost them the extra point. Positives of this game; the Sens were able to match the speed for the most part, and still put up a lot of goals. It is good to know that the Sens can put up many goals, as realistically their defence is shaky. Hopefully both sides of the ice will be good when they face the Toronto Maple leafs.

The Marquee Matchup, The Main Event, The Battle of Ontario. Call it what you want, but all eyes were on this HNIC matchup featuring the Stanley Cup favourites of October, the Toronto Maple leafs vs the One shot away from the Stanley Cup final, Ottawa Senators. Once again CTC was invaded by those annoying leaf fans who live in the City of Ottawa and get paid by the City of Ottawa. However this time, the Sens would not let them be a deciding factor as they completely dominated the first and second period. They also silenced the crowd as they took a 3-0 lead into the intermission. However because they are the Sens, they almost lost that lead in the third as the Leafs scored twice in under 10 minutes to put pressure on the Sens. However Guy Boucher the genius, called what would be a very timely timeout and when play resumed Mark Stone scored 7 seconds after the last Leafs goal. However that would not be enough as the Leafs would score off an undeserved power play to put pressure on the Sens again. Big Game Brass had other plans however, and he decided that enough was enough and he sniped a goal to make it 5-3. Stone would add an empty netter and the Sens would win 6-3! The only negative of the game was that Bobby Ryan broke his finger again and will be out for at least a month. Here are the positives: We beat the Leafs, we took all the leafs fans’ money and sent them home with nothing, we scored 6 goals, our big boys came out to play, and oh yeah almost forgot, Sens fans were beating up Leafs fans in the seats 🙂

To sum up the week, the Sens finished 1-1-1. Not bad, not great, but realistically it should have been 2-1. Tune in next week for the next edition of Ottawa Senators Weekly!

Tell us what you think about this week on our Twitter or Facebook or  On the comment section and tune in next weekend for the next Weekly Ottawa Senators Review.