A New Era In Ottawa 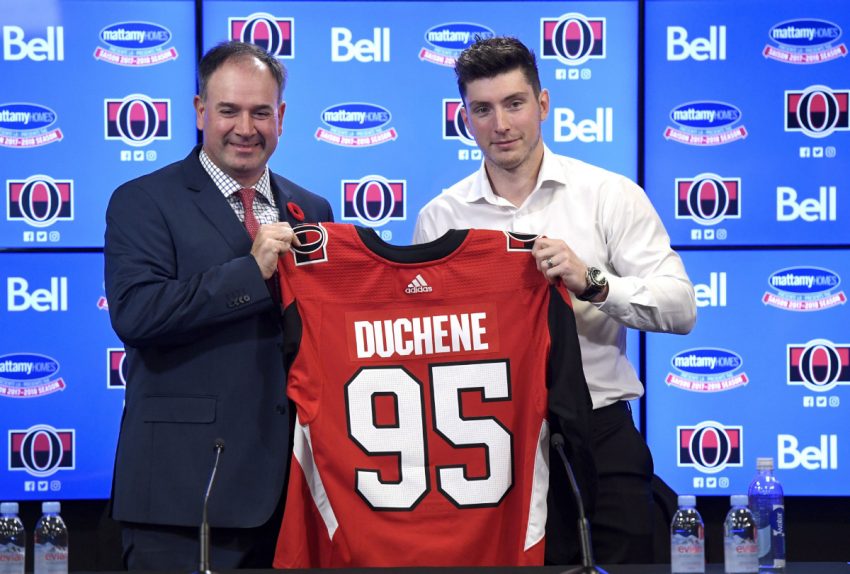 Wow, just wow. After months of rumors , the Senators have finally pulled it off. The Sens have finally acquired the services of Matt Duchene. On Sunday the sens sent Kyle Turris (to Nashville), Andrew Hammond, Shane Bowers, a 1st round pick (2018, top 10 protected), and a 3rd round pick (2019) as pieces in the three team trade with Nashville and Colorado to land Duchene in Ottawa.

This trade is massive for the sens! The Sens were able to keep all of their top prospects and have added a bonafide 1st line center. Turris was an exceptional player for Ottawa but, he was never an elite top line center. He is a very good 1B and adds a massive threat to Nashville’s offense but, the Sens got the best player out of this deal. Matt Duchene adds a massive threat to Ottawa’s offense, I will get more into analyzing what Duchene adds to the Sens lineup in a post coming in the near future.

The Sens really did not give up anything crazy for Duchene. Yes Turris is a big loss for the team and community however, he was not resigning this summer and it’s better to move him now instead of losing him for nothing. If he would’ve taken the same deal with the sens then I think you resign him but, reports were that he would accept nothing less than an 8 year deal and him taking 6 in Nashville makes it appear that he wanted out of Ottawa. The Sens also gave up this past year’s first round pick Shane Bowers. This really is not a big loss to the organization as Bowers doesn’t project as much more than a third line center and is not even one of the organization’s top 5 prospects. Also the Sens have good center depth for the foreseeable future with Duchene, Brassard, Pageau, Colin White, and Logan Brown. This doesn’t leave much room for Bowers in the future, making him expendable. On top of Bowers, the Sens gave up a first round pick in this year’s draft however, the pick is top 10 protected in case of the unlikely event the sens season goes awry and they end up in the lottery. The Sens pick figures to be late again and not all first round picks turn out (see Jared Cowen, Curtis Lazar, Jim O’Brien, etc…) so they are better off with the known commodity of Matt Duchene. Additionally to all this the Sens threw in a 3rd round pick (2019) to get Colorado to take on Hammond’s contract. I like this part of the trade, it allows the Sens more cap flexibility to potentially add more pieces before the deadline for a deep playoff run.

I love this trade for Ottawa, it sends a message to every player in that locker room that they are serious about winning NOW and will not waste Karlsson’s prime years. This trade adds a huge piece to Ottawa’s lineup and makes them legitimate contenders in the East. Matt Duchene is a motivated player and said in his introductory press conference that he can take his game to another level. Never underestimate a player’s determination to prove people wrong. All in all the Senator’s added a huge piece in Matt Duchene without subtracting much from their current lineup, this is a huge move for them and I can’t wait to watch some Sens hockey! Let us know what you think of this trade for Ottawa in the comments.

3 thoughts on “A New Era In Ottawa”