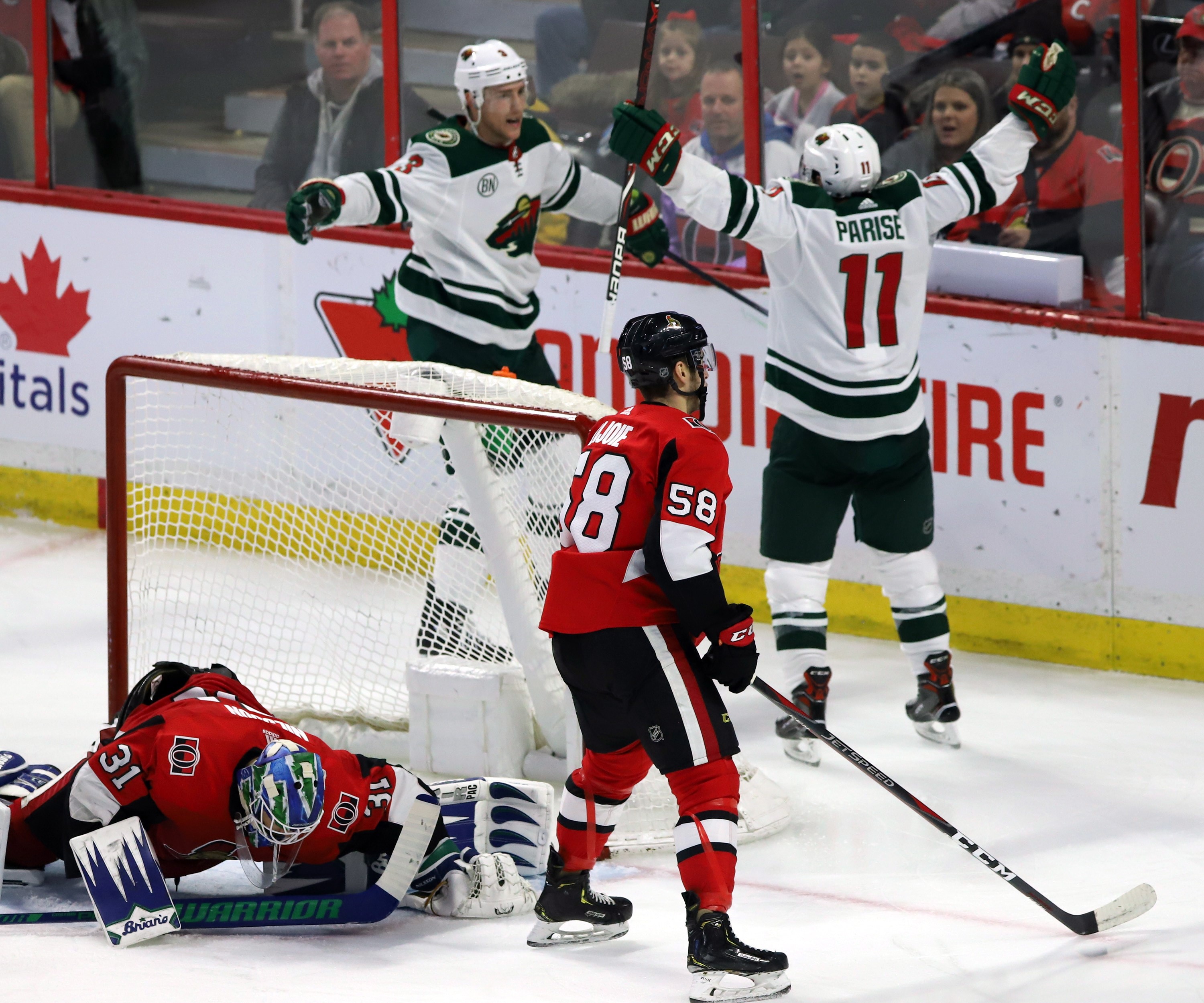 8 game losing streak. Dead last with no first-round pick. Owner being sued. All this sums up the first half of the 2018/19 NHL season for the NHL’s biggest joke: The Ottawa Senators. Yes ladies and gentlemen, we have reached the midway point of this season and boy has it been a wild ride. I’ll be giving my analysis on the whole situation on and off the ice and I’ll try not to be too negative.

Before I get to the on-ice portion, I want to talk about the off-ice drama starting with Mr. Eugene Melnyk. Surprisingly, he made it to late November without doing anything stupid. However, as late November hit that’s when Episode 2 of the Sens Reality TV show happened. (If you are looking for Episode 1 which featured the infamous “Sens Uber Video” you can find it here). To sum what happened up, basically the Lebreton arena deal was falling apart very quickly with Melnyk having most of the blame put on his shoulders. So Melnyk did the typical thing and sued his partner Trinity Development founder John Ruddy for $700 Million. Now obviously Ruddy wouldn’t stand for this and he ended up counter claiming for $1 Billion saying that Melnyk was not co-operating. So basically, two rich men whining while the Sens fans suffer. Now because of all of this, some information got leaked about the terms and what Melnyk really wanted.

Now correct me if I’m wrong, but basically Melnyk wanted Ottawa to pay for the arena and for him and the Sens to get 30 years of free rent on top of that. To cap it all off he would basically have full control over the project. Like I said, typical Melnyk stuff. Now while this is all happening, Sens fans, who are still mad about what’s going on decide that empty seats at a game will send a good message. Of course, by empty seats I mean that the Sens are 27th in the league with an average attendance of 14.5k. The teams below them? Carolina, Arizona, Florida and Islanders… teams that we expect to be there. Ottawa usually averages around 16-17k so clearly a message is being sent. Now I don’t want to focus too much on the off-ice situations, so I know I’m leaving some important news out such as the Randy Lee case, but the on-ice situation is even more ridiculous and needs attending to.

Let’s start with Pierre “in Orleans” Dorion. He’s switched up on us. He went from being an independent thinker to being Melnyk’s personal puppet. Now if you remember, Dorion said that the Sens were in a rebuild. Now I personally still don’t know why we needed a rebuild but I took his word for it. So fast forward to now and we have not one Karlsson situation, but 3… That’s right, Matt Duchene, Mark Stone and Ryan Dzingel all need new contracts and here we are in January at the midway point of the season and NO ONE HAS BEEN RE-SIGNED. Let me get this straight, we have three core pieces in our team who all happen to be in the top 4 in points for the team, we have these core pieces that Dorion can rebuild this team around, and you are trying to tell me that not one of them has been re-signed yet! Literally a little over a year ago we traded Kyle Turris, a fan favourite a great 2nd line player and a huge hero in the Capital City Condor’s organization to Colorado along side a decent prospect in Shane Bowers and a 2019 FIRST ROUND PICK away for Matt Duchene. Don’t get me wrong, I still stand by what we said when this trade happened, this was a great trade and Matt Duchene is the better player for Ottawa. That’s not my issue. My issue is that we gave up all of this for Matt Duchene to walk away after 1 year. Excuse me? What kind of incompetency is this? Look at Mark Stone, a future captain for the Sens, a real hard-working power forward who is just a grinder in general, we aren’t going to offer him a contract either? Same with Dzingel, he’s finally shaping into a decent forward. I thought that we didn’t re-sign Karlsson so that we could use the money and invest it into these players. However, if we let even 2 of these players walk, I am ready to throw hands with Dorion. PURE INCOMPETENCY! Now to make matters worse, it appears that the Duchene talks are going to be linked with the Stone talks, so if one leaves the other most likely will too.

I strongly believe that you cannot be a General Manager in the National Hockey League when you are making idiotic decisions like this. I also strongly believe that Dorion wants to sign these people but Mr. Eugene “freaking” Melnyk wants to stick his big broke nose into this business and is not giving the reins to Dorion. I also have a strong feeling that Boucher (who I will get to in a second) also has substantial input into this as it took Dorion till January to trade Tom Pyatt, Guy Boucher’s adopted son. It took literally to the halfway point of the season for the Sens to realize that we don’t need Pyatt when we have stronger players such as Nick Paul. Good Job Dorion, I can’t determine whether you or Jim Benning hold the position for worst General Manager in the league. SIGN THE PLAYERS

I cannot fathom how we are at the midway point of the season, still dead last and in the midst of an 8 game losing streak and Guy Boucher is still our coach. Now, last time people were calling for Boucher to be fired, I explained that this wasn’t on the coach but on our GM. However, this time it’s heavily on Guy Boucher. This man has lost the team and has no idea what he’s doing. He insists on doing the exact same thing game after game even though it’s clearly not working. Let’s take a look at the Sens defensive lineup (without Chabot):

Not one player here on defense is a first line defenceman, not one! So why does Guy Boucher insist on going 11 forwards, 7 defenceman every game. Not only does this take away from an offense who is 9th in the league with 136 goals, but it just makes the team play more defensive, something that doesn’t work when Cody Ceci is your number one defenceman. Oh ya fun fact, the Sens are last in the league for goals against with 172 goals against. So I guess Guy Boucher can’t do simple math because clearly the Sens are better at playing offense than defence. But NOOOOO, Guy Boucher keeps on playing a defensive game which ends up with the Sens allowing 20 shots against in a damn period. Anyways, I don’t understand why we are even playing defensive. We are dead last in a so called rebuild, let the kids play. Let’s see some Gun Ho offense which will lead to more entertaining games. Even if we lose it doesn’t matter because the season is already lost. At least make the games entertaining. But NOOOO, Boucher refuses to play the young players properly which leads to Drake Batherson being sent down and Nick Paul being scratched all the time. Since Boucher has lost the team clearly, I believe it is time to fire him, hire a new coach and actually play the young players. This season is lost but there is no need to gift wrap Jack Hughes to Colorado. This utter incompetence needs to end right now starting with the Owner moving all the way down to the Coach. Just take it in, 2 years ago we were one goal away from the Stanley Cup final….

Thanks for reading, I know I missed a lot of things but I just had enough with this team and had to unleash my anger. Please let me know what y’all think and what are some topics I missed! You can let us know down below in the comments or on our Twitter or Facebook. Go Sens Go!

THE POSITIVES OF THE SEASON SO FAR WILL BE POSTED TOMORROW