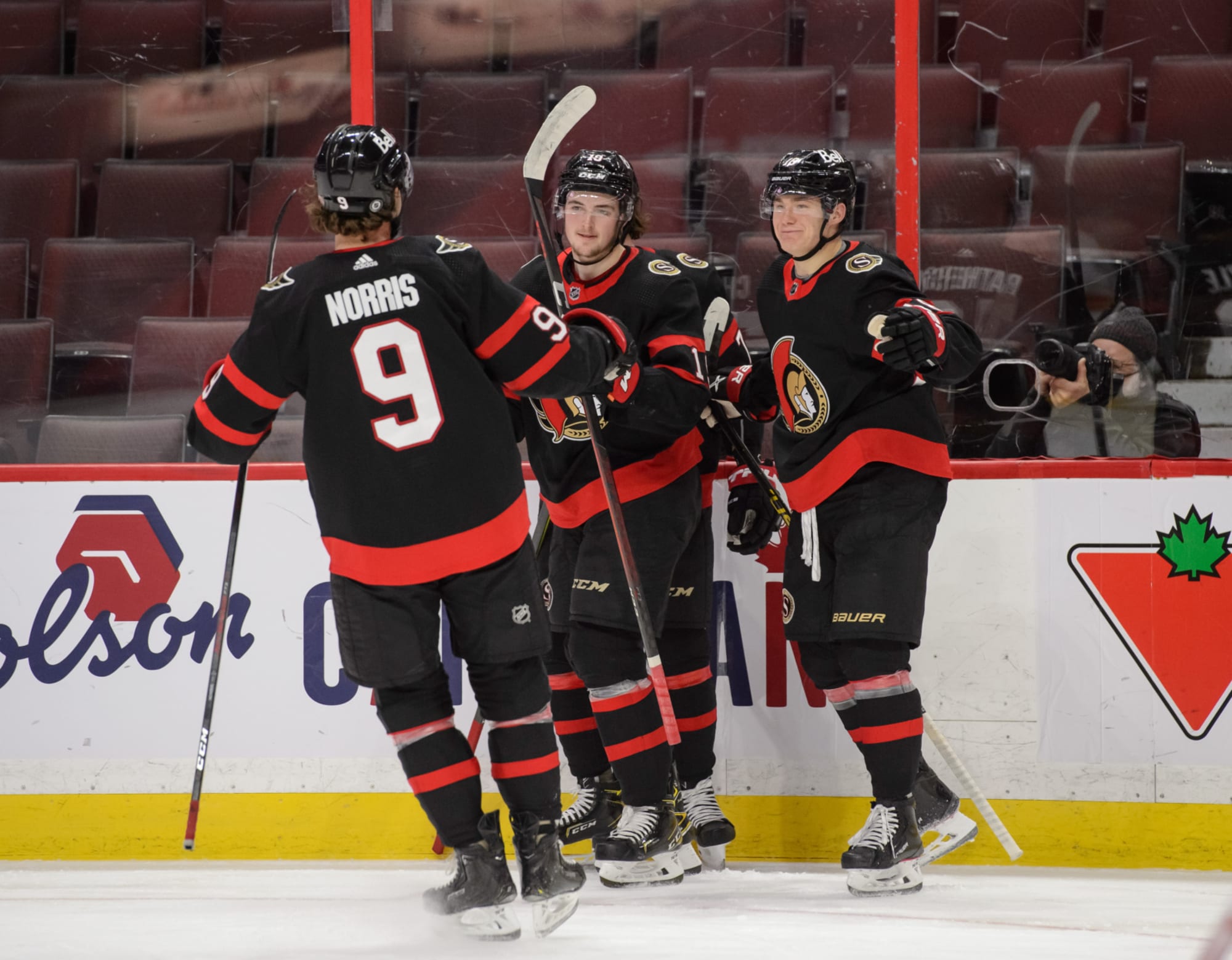 On the cusp of sadness surrounding the tragic ending of Eugene Melnyk’s ownership in Ottawa, the team will now look to move on to a new era in the Nations Capital. Until then there’s a period of uncertainty and waiting in Ottawa, with an eventual outcome on the horizon.

While in waiting I decided the best way to deal with the unknown road ahead, was to turn to Spotify and Neil Diamond for some reflection. Despite the heartache and uncertainty surrounding the team, no matter how hard you try, Sweet Caroline will provide you with positive vibes only. Let’s have a collective look through my Sweet Caroline, lensed glasses as we approach the deterioration of another Playoff-less season for the Ottawa Senators.

Sens GM, Pierre Dorion took some flak from Sens fans when he made an unforgettable, meme-able statement during an inside look at the draft debate process a few years back.

“But is he a high character guy”

Laugh all you want at the statement, we’re seeing some real merit to that point now. This team, lead by Brady Tkachuk is, if nothing else, the most likeable group of players in the entire league. This past month Captain Brady decided that a few kids playing street hockey in an Ottawa suburb, needed one new joiner.

Not to mention, that he stopped on the way home from playing an NHL game, incredible! That’s not all, Brady also decided to write this young fan back, after receiving a hand written note from her earlier this week. Then on top of that, gave her an autographed jersey in the tunnel before a Sens home game.

Still don’t believe me? Get a load of mic’d up, Drake Batherson in practice. There’s so much to unpack from this brief view inside the team but it’s clear the environment that DJ Smith has created, is a fun one to be a part of.

Furthermore, DJ Smith doesn’t get enough credit for his ability to create this fun-loving atmosphere, despite being dealt various hardships this season. The Sens have faced the death of their long-time owner, Covid-19 outbreaks resulting in sickness and a compressed schedule as well as multiple injuries to key players this season. DJ has managed to keep things light and positive.

The post-win celebration/bike helmet videos, should become a mainstay for Ottawa. This crafty engineering gives both players and fans some positive reinforcement after a victory. Even the late B.F. Skinner would be impressed by this example of his theory behind operant conditioning. Safety First!

In addition to the current members of the team, one of their future players has taken on a similar mentality that I can speak to, on a personal level. Sens 10th overall pick, Tyler Boucher reached out to me via video when he learned that my daughter was sick. An OSEG team member later asked me what my daughter, Jayda’s lucky number was. Then, I received this surprise package in the mail from the most mature 19 year-old I’ve seen and the Ottawa 67’s. What a class act!

The Senators have the youngest group of core players in the NHL. To say “the sky is the limit” would still be an understatement for this team. I think you can pick apart some past moves and pro scouting and be justified in your criticism but what’s not debatable is the young talent the Sens have drafted or traded for and developed.

Starting with the Sens first 30-goal scorer since 2011-12, Norris has become automatic from “his office” on the man advantage. As Ross Levitan of the Locked On Senators Podcast has pointed out numerous times now, “you know it’s coming and there’s absolutely nothing you can do about it.” Norris is a highlighted player to game-plan against, especially on the powerplay (15/31G on the PP) yet, teams can’t resolve his shot. Statisticians will tell you that his 21.5% shooting percentage is not likely to be sustained. So will Norris genuinely be a 30-goal contributor or is it fools gold? Even if his shooting percentage was a more sustainable, 15%, which according to Gaimday is right around the average, premium shooters range, he’d be on track to score 33 goals over a full 82 games this season.

I’ve already highlighted some of his off-ice leadership and people qualities but the on-ice Brady is equal in greatness. You may not always notice his skill or flash (although he does have way more than most outsiders think), Brady Tkachuk is one of the most unique player-builds in the NHL. Every Habs fan would love to have a do-over at the 2018 NHL draft and their insecurity is the only thing telling you otherwise. Tkachuk brings the level of tenacity, toughness, and leadership that embodies the Tkachuk family legacy. He is, quite literally who this team’s identity is built around. Although analytical geniuses have difficulty seeing the world in anything other than the black & white one they’ve created, he brings a level of value to his contract which is tough to measure in stats alone. For the rest of us in the real world, who watch Brady’s commitment night in and night out and his team leading stats, 53Points in 67GP (go figure), we welcome the long term commitment. Here’s a look back at one of Brady’s answers related to team tightness, during his interview with us on The Future Sickos Podcast.

Despite the embellishment controversy of late, Stützle has had an excellent developmental season for Ottawa. He made the difficult transition of going from winger to centre this season and made it look relatively seamless. He’s second to only Connor McDavid in penalties drawn and is on a respectable 52 point pace (over 82). Although his production is not eye popping at this stage, he’s easily the most electric player on the team. Stützle has had moments where he takes over games with his skill and has greatly improved his play away from the puck. According to some charts, Stützle’s been Ottawa’s best defensive forward this season. His transition abilities coupled with clean zone exits/entries make Stützle easy on the eyes and tough on opponents. He’s been guilty of holding onto pucks a little too long in the offensive zone and worsening his shooting angle but when Stützle figures it out (and it won’t take him long) I’d expect his offensive production to spike. Stützle has the potential to be the difference maker on this roster as it moves forward, he’s that good.

Batherson has been the most steady producer this season for the young Sens. The only Sens All-Star nominee before getting injured, Batherson continues to relish in his breakout season. He’s over a point-per-game this year and essentially does everything for Ottawa. He makes any line he’s on instantly better, sharing time on the top line and recently on the second unit with Stützle. Batherson has been the straw that stirs the drink for Ottawa offensively this year. To top it all off, his contract is already looking like an absolute steal for Pierre Dorion, who somehow locked the star forward down for 6 years at just $4.9million per. Batherson plays physical, uses his skill and uses his brain on the ice. He’s a dual threat player who can shoot it and pass it equally well. Here’s a look back at how it all started for the former 121st overall pick. I think you call that “found money.”

The most valuable player on the team, Chabot still holds that title for the young Sens. Logging over 26 minutes of ATOI (1st in the NHL), Chabot is comfortably and quietly still far and away the best player on this team. Considered by many to be a top 10 defenseman in the NHL, sometimes it’s hard to believe that Chabot’s still only 25 years of age. This year, Chabot’s grown his defensive play and continued his incredible breakout abilities. He’s one of the most dynamic skaters in the league, constantly changing his pace on defenders and moving seamlessly through the neutral zone. Chabot is now a rounded player, trusted in every important situation and will surely provide the younger, upcoming defenseman with the necessary leadership.

#SanderSZN is either approaching or it’s not in Ottawa. After suffering a hand injury with North Dakota, it remains unclear if Sanderson will make his Sens debut this season or next. Either way, it’s not too early to consider the Sens top prospect a core member of this team. In fact, I think you can argue that the 2020 5th overall pick could be the most influential player in this entire rebuild. Ottawa is depending on Sanderson to quickly become a top 4 defenseman next season. I have absolutely zero doubts that Sanderson will transition his elite, 2-way game to the NHL and fast. He’s a professional in every sense of the word and has had an outstanding season on the ice. Captain of the USA WJC squad and a key member (before injury) of the USA Olympic team. Unfortunately both of those tournaments went south for different reasons for Jake Sanderson, yet he’s been one of the best players in College hockey at just 19. In hindsight, It’s easy to see why the Sens selected Sanderson ahead of some high end, available forwards in 2020. Here’s a look at what we can expect from Sanderson to start his NHL career. The anticipation continues to build for the Sens top prospect.

It’s easy to see the negatives when a team is looking at a top draft pick for the 5th consecutive season as opposed to a playoff position. Still, the Sens have one of the brightest futures in the league. There’s no reason to believe the Sens can’t compete next season if they get healthy and surround this great, young core group with quality talent. As the season winds it’s way down, we look onwards and upwards for the great things to come in Ottawa.