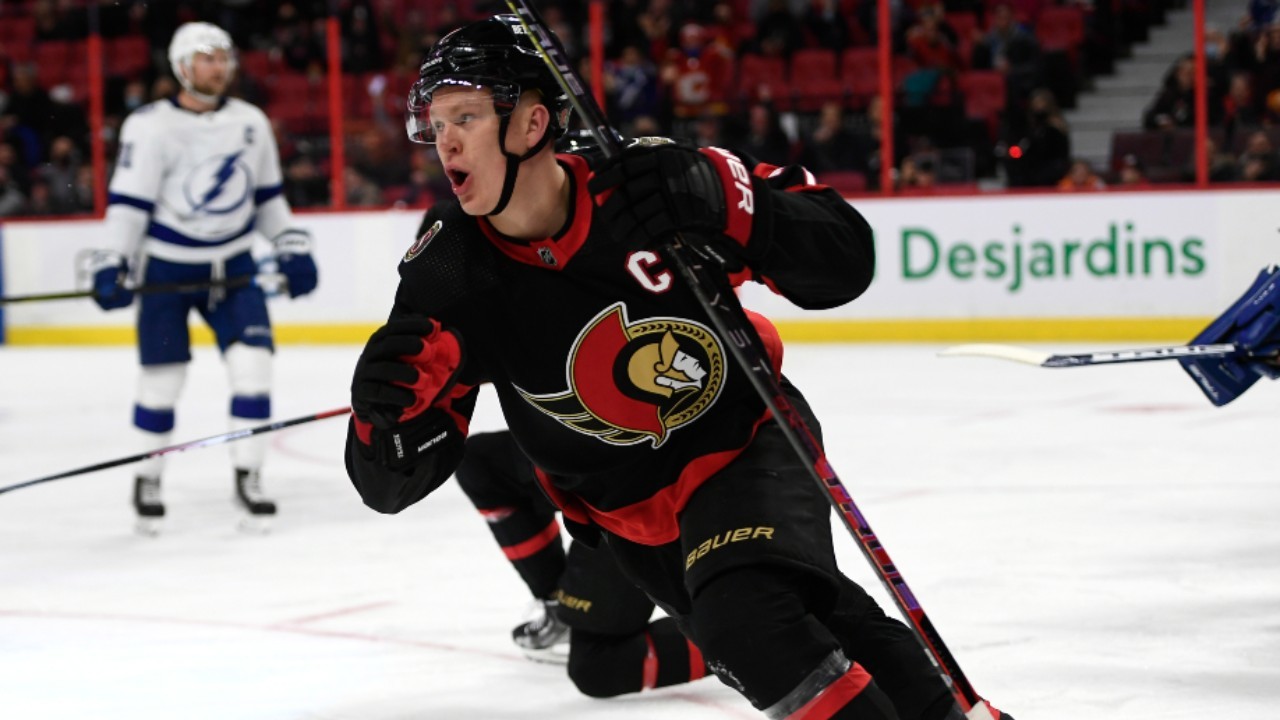 Brady Tkachuk is a fan favourite in Ottawa and is very quickly cementing himself as one of the best captains in the NHL at just 22-years-old. He is constantly providing excellent leadership on and off the ice to make the Senators a respectable NHL franchise once again and is quietly having the best season of his young career.

In his 4th NHL season with 10 games remaining, Tkachuk has already set career highs across the board in goals, assists, points, and penalty minutes. During what has been a disappointing year for the Senators, he is leading by example in his 1st year as captain and proving himself to be an elite winger.

Earlier in the year, Tkachuk, Josh Norris and Drake Batherson were quickly becoming one of the best first-lines in the NHL. All under the age of 23, Senators fans were beginning to see shades of the famed “Pizza Line” from the late 2000s that simply dominated the NHL for the better part of the decade. A playmaker in Batherson (Spezza), an elite goalscorer in Norris (Heatley) and a captain who does it all in Tkachuk (Alfredsson). These 3 players have provided a promising glimpse of what the next decade will look like in Ottawa.

Unfortunately, Norris and Batherson suffered injuries in back-to-back games that kept them out of the lineup for extended periods of time. Norris had more of a minor injury which only kept him out for 15 games (read more about Norris’ impressive sophomore season here). Batherson has been a different story after suffering a high ankle sprain in late January. Limited to just 5 games since the injury (in part due to an undisclosed illness), the Senators have certainly missed Batherson.

One would think that Tkachuk in particular would miss the two players the most. Early on this year, he did not receive much praise for his offensive abilities. Norris was noted as an excellent triggerman who was on the receiving end of Batherson’s playmaking. Tkachuk was getting lost in the shuffle when discussing the team’s offensive options. But his skill set can be very complimentary to two players like Norris and Batherson, allowing the two to find more open space which inevitably leads to better scoring chances.

With that being said, losing two of your best players is bound to have ripple effects on the whole team. The powerplay efficiency dipped dramatically with the two players gone. However, this didn’t necessarily impact Tkachuk’s production.

There are a few things to note here after looking at these numbers. Batherson and Norris were hurt in back-to-back games, with the latter leaving January 27th’s game with his injury. So these season splits for Tkachuk are outstanding considering his two linemates missed at least half of those 35 games. It is also worth noting that Norris returned from his injury on March 3rd. Tkachuk’s stats since then?

So his production has taken a bit of a jump in the last 5 weeks, but not to a point where it’s unsustainable. The fact that Tkachuk was able to maintain a respectable level of production while the team’s top playmaker and top goalscorer were out is incredible.

He is maintaining his career-high pace for a total of 26 goals, 30 assists and a team-leading 56 points through 69 games. With 10 games to go on the year for the Senators, 30 goals and 60 points are certainly achievable totals for Tkachuk.

This is all highlighted by the good deeds Tkachuk has been doing for the community of late:

Acts like these are what help grow the fanbase from the ground up.

As the Senators hopefully add more pieces to compliment this young core in the summer, Brady Tkachuk seems primed for a massive season next year to lead the Senators to their first playoff appearance since 2017.

That $57 million contract doesn’t look like a terrible deal at all. He’s worth every penny.