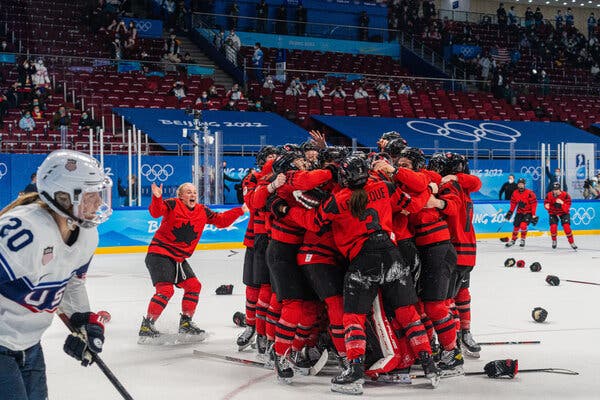 Canada went a perfect 7-0-0 in the tournament, playing great on both sides of the puck and consistently dominating their opponents in every game.  They are extremely well-coached, have talent all over the roster, and have a lot of depth, which helps them win games.

They finished a perfect 4-0-0 in the round-robin, dominating Switzerland 12-1, steamrolling Finland 11-1, beating the Russians 6-1, and pulling off a tough win against the US 4-2, which was their tightest game of the tournament to that point.

In the knockout round, Canada shutout Sweden 11-0 in the quarterfinals, pumped Switzerland 10-3 in the semi-finals and won a thrilling 3-2 game against the US to win gold.

They outscored their opponents a whopping 57 – 10, in their seven games. They were the most dominant and complete team at the tournament and showed why they deserved the gold medal. They had the best goal-margin of any team at the Olympics.

They were also arguably the best defensive unit, allowing a mere 10 goals the entire tournament. They showed their stellar ability to limit opponents’ high-quality chances, force turnovers, limit defensive zone time, and win all the puck battles. They also have two fantastic goaltenders they can rely on at any time, especially their starter Ann-Renee Desbiens, who saved 51 of 53 shots the US got in Canada’s 4-2 preliminary win over their southern neighbours.

Canada had to control the puck better and play strong defense to limit quality offensive chances for the US and use their speed and playmaking to create quality chances of their own in their second meeting with the US. They did just that and more in this highly anticipated gold medal game.

Canada started the gold medal game very well, getting out to a 2-0 lead at the end of the first period with goals from Sarah Nurse and Marie-Philip Poulin. Nurse is now the leading scorer of the tournament with five goals and 18 points, breaking the tie with Hayley Wickenheiser (who had 17 points) for most points in a single tournament. Poulin scored her sixth and seventh goal in her fourth gold medal game and became the only athlete, male or female, to score in four gold-medal games. She is the definition of talented and clutch.

It could have been 3-0 for Canada had it not been for an offside call that reversed a goal from Natalie Spooner seven minutes into the first period.

Poulin’s second goal of the 2022 gold medal game put Canada up 3-0 halfway through the second period. Not only can she score but she can also consistently set her teammates up for scoring chances. With all she’s done in her career, she is definitely a future Hall of Famer.

Canada played great defensively in the first half of the game, limiting the US’ shots on goal, quality chances, and offensive zone time. They also created several turnovers and generated offense with their speedy transition attack. Desbiens wasn’t tested a lot but made crucial saves when she needed to. Things looked good with a 3-0 lead, but the game wasn’t over yet.

The US cut the lead to 3-1 with a short-handed goal by Hillary Knight near the end of the second period. US’ forward Hannah Brandt forced a turnover in her own zone, ending a Canadian attack and starting a 2-1 counterattack of their own. Brandt made the crisp pass and Knight capitalized on the rebound after getting stopped on her initial scoring chance.

Canada was still in relative control offensively and defensively, but the US was gaining some momentum and both teams knew that.

The US came out strong defensively in the third period, limiting Canada’s quality chances and creating turnovers. However, they were unable to do much with those turnovers and Canada’s strong physical defense prevented them from setting up in the offensive zone. Desbiens made a few key saves to keep the game 3-1 for Canada. Canada was okay with sitting back and defending up by two goals.

The Canadians killed off a strong US powerplay – that has scored in each game in the tournament – midway through the third period after a penalty taken by Jocelyn Larocque.

The US pressed and did everything they could to generate offensive chances. They generated a lot of shots but not very many of them were high-quality or dangerous scoring chances. Desbiens stood tall making key saves when she had to. With every push the Americans made, Canada held strong. With less than five minutes left, it looked like Canada would reclaim the gold.

Down 3-1 with just over three minutes left, the Americans pulled their goalie. Canada could not seal the game with an empty-net goal. With 1:25 left, Poulin took a penalty and the US had a 6-4 powerplay. They generated a lot of chances on the powerplay and it led to a goal.

With 13 seconds left, US forward Amanda Kessel would cut the lead to one with a power-play goal, but it was too little, too late. Canada had finally exacted their revenge on the US, who beat them to earn the gold medal at the 2018 Winter Olympics.

Canada proved to be the best team in women’s hockey with another gold. The US is the second-best team. They forced Canada to work hard and battle for the full 60 minutes to win both games against them, something all the other teams in the tournament couldn’t do all that well.