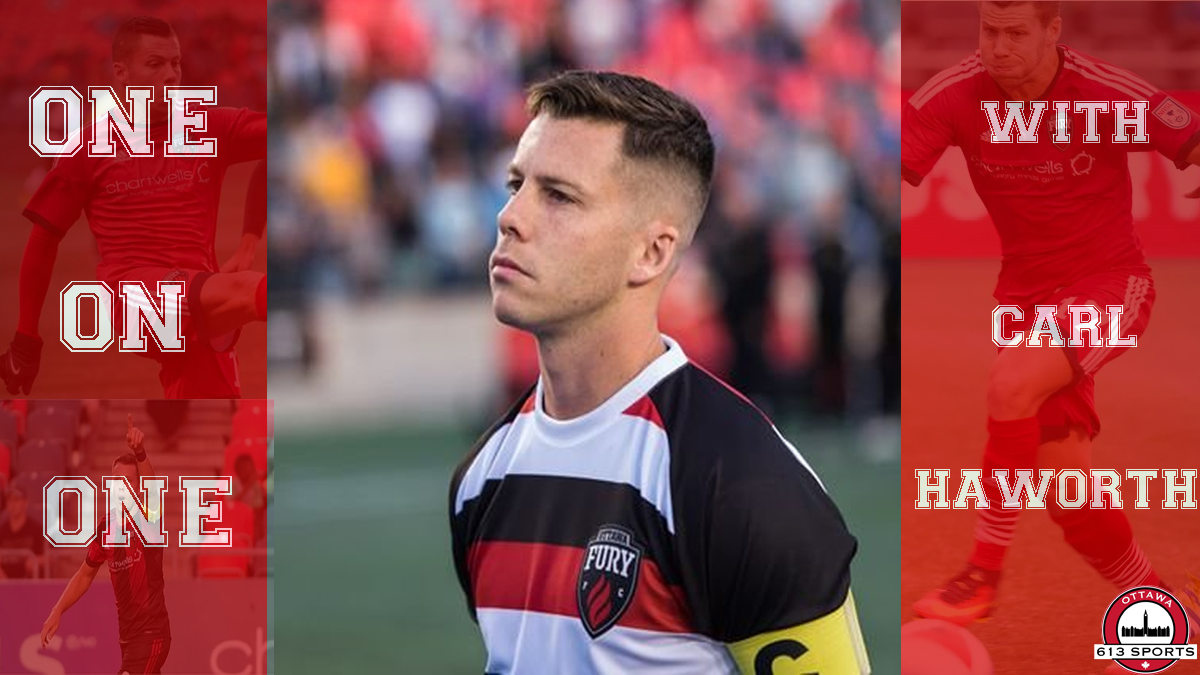 On February 10th, 2022 Atlético Ottawa announced that Carl Haworth would be signing a two-year contract with the team. The former Ottawa Fury captain and longest-serving player (159 appearances) of the Fury returns to the capital after spending two seasons with Indy Eleven.

“It’s an amazing feeling, I’ve obviously spent a lot of time here in the past, played for many years here in Ottawa and built a lot of strong relationships here in the city. Ever since the announcement, my phone has been ringing off the hook and all these past relationships have been coming back around,” Haworth said.

Haworth’s decision to return to the capital was as simple and straightforward as could be he said.

“It was a pretty simple decision. Once the opportunity came up and I started speaking with the general manager and the team here, it was a no brainer. My fiancé and all her family are from here and it’s a city that we had both enjoyed so much and long-term we had always envisioned ourselves being here and growing here so the fact that I could come back here and play soccer was the easiest decision I have made in my career.”

Haworth, who has such deep roots here in the city had never planned on leaving, but that decision was made for him when the Ottawa Fury disbanded in November of 2019.

“It was a very sad day, I remember that day very well with the press conference announcing the end of the Ottawa Fury. Seeing a lot of the people that helped build the Fury brand and helped build soccer and make it what it is in the capital, to see those people have their dreams and jobs taken away, it was a very sad moment. Obviously as a player, somewhere that I had established myself and really enjoyed representing and playing for the club and the city it was a pretty low moment but then seeing them get a new franchise almost immediately was very re-assuring,” he said.

Two months after the Fury disbanded, the city of Ottawa was awarded a CPL club and although Haworth wasn’t involved in the new club, he was tremendously happy.

“The foundations were in place for this city to thrive as a soccer city, you can see that through the fanbase here and what [Bytown Boys & Capital City] have done as a supporters group. It is infectious, and there was never any doubt in my mind that soccer would return, but to return so quickly was promising and if the news came a little bit earlier, maybe I wouldn’t have signed elsewhere but I am so happy that it came back as fast as it did.”

Haworth grew up playing soccer with Barrie SC and always dreamt about playing professional soccer in the Canadian League. Signing with Atlético Ottawa is almost like checking off a final box on his career wish list according to Haworth.

“It wasn’t something that was ever possible when I was growing up. The thought of ever having a professional league in Canada was never mentioned back then and to envision that happening was a very far reach at the time, but seeing where soccer is now and how fast its been growing in Canada, particularly with the women’s national team being a powerhouse for a while and now the men’s team to do so well and the CPL now in place and to be part of that is so special. It’s been a huge opportunity that I’ve been looking forward to ever since the CPL started,” he said.

Haworth has been following the CPL and Atlético Ottawa from the start and he said that he has been very impressed with how the Supporters groups have grown that support in the city and created that European atmosphere at games.

“Drew Beckie is one of my best friends and to see what he has done here with leading this franchise and Chris Mannella is there and I’ve been speaking to him for a long time and following how he’s been doing with Atlético and they signed Max Tissot as well. It is very important for a young franchise to have those leaders and strong characters in place to help build and sustain success. It is something that doesn’t happen overnight, it is something that takes time and effort. It was a very difficult time to start a franchise, but bringing these guys in place and having the right people in place will only help this organization.”

When asked if he had anything to say for the fans jubilating his return to the Nation’s capital, Haworth had this to say:

“I’m excited to meet you all and to rekindle past relationships with supporters and to meet the new supporters that have come onboard. Looking forward to having you guys at TD Place and getting to interact with you guys more and to begin putting faces to the names of supporters.”

You can catch Haworth at Atlético Ottawa’s season opener against Cavalry FC on April 9th.