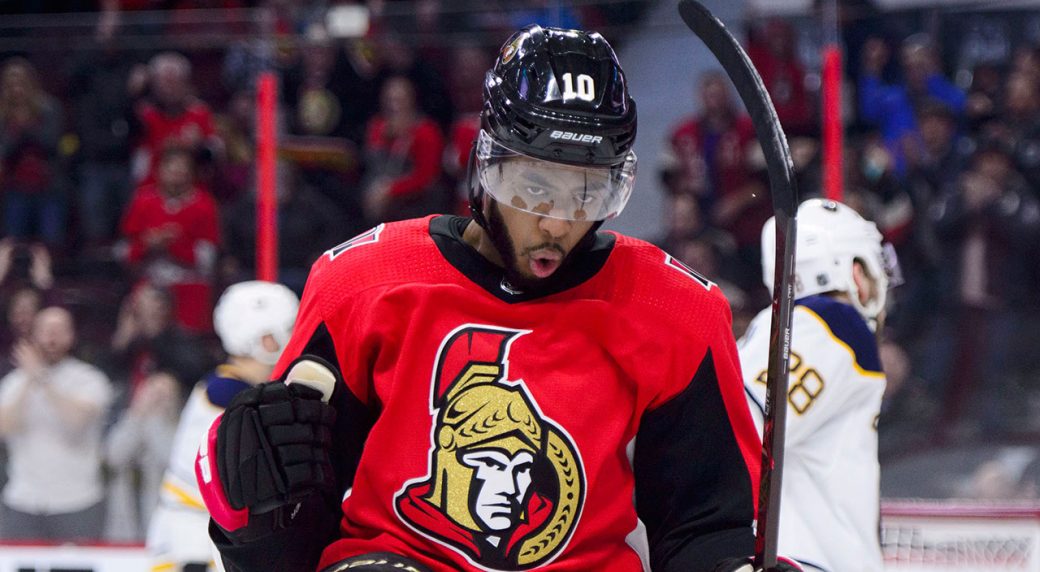 The 2019-20 season was cut short for the Senators. However, that doesn’t mean we can’t re-visit how the team performed this past year. It was well established going into the season that there would be a lot of losing with the main goal being to win the draft lottery. With that said, this article will breakdown and grade the team’s forwards performance this past season.

Thankfully this year Tkachuk has some company in the A grade as he was the only one to receive this grade in last year’s report card. Tkachuk essentially posted identical numbers to his rookie season (22 goals and 45 points in 71 games as a rookie, 21 goals and 44 points in 71 games this year). His quality of teammates was also considerably lower this year than it was last year. For this reason, Tkachuk earns back to back As.

Connor Brown who was acquired by the sens in the Cody Ceci trade was a nice surprise this season. He set a career-high in points with 43 and very well could have set one in goals too as he was only four back with 11 games remaining. For these reasons Brown also earns an A and hopefully will be back with the team next year.

Honourable mention: Jean-Gabriel Pageau would have also received an A if he was still on the roster.

Duclair was arguably the team’s best forward from a scoring standpoint. The problem was his consistency. He started the year on fire, but a long dry spell in the middle of the season is why he only receives a B. Hopefully he receives a contract offer from the team this off-season (whenever that might be) and we get to see more of Duclair from the first half of the season. If that is the case it’s very likely he gets a boost up to the A’s next year.

Duclair is the lone player to receive a B, as Ennis and Namestnikov both would have but they were also traded at the deadline.

Tierney did not experience as much offensive success with the team as he did last year. That was expected though, as most of the offensive drivers from last season are gone. The reason Tierney finds himself with a C is more for his all-around game. While he did play in almost all situations for the team, special teams did not improve with him seeing an increased role. Tierney played a lot of PK time this year, and that unit was actually worse statistically than it was last year. So, Tierney gets a C.

Batherson’s AHL season would receive an A without a doubt. However, he didn’t carry over as much of that production to the NHL as fans would’ve liked. He was only able to tally three goals and 10 points in 23 games with the Sens. This would put him on a 35 point pace for an 82 game season. The problem was his offensive skill was only shown in spurts and was not consistent. Hopefully with more experience and higher-quality teammates, we can see Batherson’s development really turn the corner next year.

After surprisingly being acquired for Zach Smith, Anisimov was able to provide some depth scoring but is clearly not the same player he used to be. Anisimov looked slow for the majority of the year and struggled with injuries. He was still able to tally 15 goals in only 49 games and hopefully provided some veteran leadership to the young players on the team.

Paul struggled with consistency this year, but showed enough potential to give fans hope. Considering that many had started to write Paul off at the start of the year, the fact that he was able to play 56 games and tally 20 points is impressive. Paul earns a C with the potential to earn a bigger role with the team next year.

Ryan was a tough player to slot into this report card. He clearly struggled to start the year and was not very productive on the ice. However, after dealing with his addiction issues and entering the league’s rehab program, when he returned he was a man on a mission. Combining his return plus battle off the ice, that would obviously receive an A. However, from just a hockey standpoint his season as a whole receives a C, but this one will have an asterisk beside it for sure.

White had one of the most disappointing season’s of any of the team’s forwards this year. After getting a big contract last off-season, maybe the pressure of that got to him as he did not look like the same player at all. It appeared as if he was lacking confidence with the puck on the ice and was playing scared to make a mistake. Hopefully, he can turn things around next season as he still has plenty of potential, but for now, he gets a D.

Sabourin was a feel-good story through training camp and the start of the season. Not only was it a good story, but at the start of the year he was a great pest and made the game more fun to watch with his hits, fights, and chirping. However, after he suffered that gruesome injury against the Bruins that aspect of his game seemed to disappear when he returned and no longer provided much value to the team on the ice. For this reason, he also receives a D.

Beaudin could arguably deserve a C considering that most fans didn’t even know who he was to start the season and he somehow found his way into 22 games for the team this year. The reason he gets a D is he tallied a total of ONE point in those 22 games and wasn’t Patrice Bergeron Jr. defensively to compensate for that.

Chlapik was a player who I had relatively high hopes for after multiple productive seasons in the AHL. However, Chalpik failed to make the roster out of camp and then was only able to produce six points in 31 games with the big club. He did however, prove to be an effective forechecker and can hopefully still provide value to the team in some capacity going forward.

After being acquired in what is arguably the most lopsided trade in Sens history, Boedker isn’t doing the organization any favours to make this trade look better. Boedker was a healthy scratch in more games than not the season, and given the quality of the roster that isn’t exactly a good look for Boedker. In the 20 games he did crack the lineup for, he tallied a whopping two goals and four points… so ya there’s not really much else that needs to be said.

Fans have had high expectations for the 6’6” center ever since the team selected him 11th overall in the 2016 draft. Brown had another productive season in the AHL but once again failed to translate that productivity to the NHL. In what was now the fourth season since the team drafted Brown, it is concerning that he still only found his way into 23 games this season. There were complaints from him at the start of the season that it wasn’t fair that the team sent him down to start the season. However, when the team gave him games in the NHL he tallied a whole one goal and eight points with the team in those 23 games. With the quality of centers in this year’s draft and the ample picks the Sens have, Brown needs to get it together fast before he no longer has a spot in the organization’s plans.

This season was a developmental one that many fans anticipated a lot of losses, and that’s exactly what they got. This is reflected by the majority of players grading lower than a B. The future is still looking bright for the team at least. Stay tuned for the defence and goalie report cards coming soon.