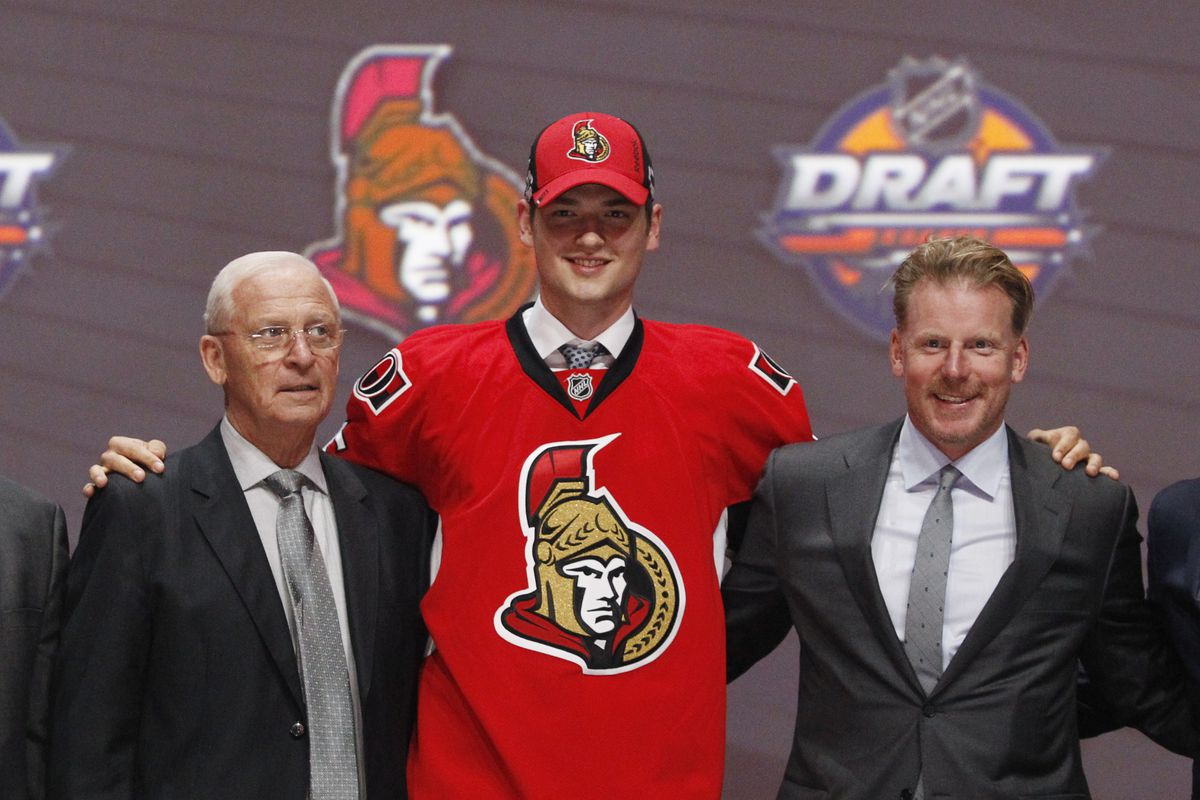 After taking a month off from this series due to the World Juniors, the second installment is finally here. The first article in this series focused on the Senators’ draft class from 2015. If you missed that article you can find it here. That draft has proven to have added some very good pieces to the Sens’ system. This article will be taking a look at the 2016 draft class.

The Senators swapped picks with the New Jersey Devils at the 2016 draft to move up one spot and select Logan Brown. Brown has been a good yet very inconsistent prospect for the team so far. Early in his development process he struggled to stay healthy. Now with health concerns behind him, he must work on getting his AHL success to translate to the NHL level on a more consistent basis. Brown is still a very good prospect for the Sens going forward and can either be a great trading chip or future 1B type center for the team. It would however, have been really nice to see McAvoy on the Sens’ top defense pairing with Chabot for the next 10 years.

The second round of this draft would end up changing the franchise forever. The team used the trade value of Dahlen, who looked like a very promising prospect at the time, to acquire Alex Burrows. This trade was pivotal in the team’s conference final run and would forever build the legend of Pierre Dorion. In all seriousness though, this was a tough round for the Sens. The team passed on another top four NHL defensemen for the second time in this draft and also passed on what appears to be a franchise altering goaltender in Hart. Both Hart and Girard are important players at positions the Sens have invested a lot in over the past few years, so had the team drafted one of these two they could’ve used that capital elsewhere to acquire more talent.

None of note, but Victor Mete was selected three picks before Burgess with pick 100 by Montreal

The entire fourth round of this draft has more or less been a bust so there is not much the Sens could have done better here. The only player to play more than 18 NHL games from this round to date is Mete. Burgess unfortunately missed his entire first season after being drafted due to an injury and his development never really got back on track. This round was a wash for the Sens.

This pick appears to possibly be turning into another steal for the team. So far Lajoie has showed the potential to one day be a very competent NHL defenseman. This is good value for a draft class that is shaping up to be a little weaker than other years. Outside of the first three rounds, Lajoie appears to be one of the most promising prospects from the 2016 draft.

Nurmi was a project player when the Sens drafted him. He has great size he just needed to work on getting stronger among some other aspects when the team drafted and he could have been a promising piece for the team. Unfortunately for the Sens he hasn’t been progressing at the pace some may have hoped, however he could still possibly provide decent depth for the team one day. With a draft full of project type players, I understand why the Sens gave this a try.

Overall, the 2016 draft has been a much weaker one than the 2015 class. The Sens have only gotten any semblance of production out of two players from this draft class. The organization simply can’t afford to have another draft like this where they miss on so many picks and better prospects (especially at the top of the draft) during this rebuild or it will set them back even more. There is still hope players like Brown and Lajoie can salvage some value from this draft class, but that remains to be seen. Thankfully drafts like this have been far and few between for the Sens over recent years. The next edition of this series will look at the 2017 draft.

One thought on “Drafts in review part two”