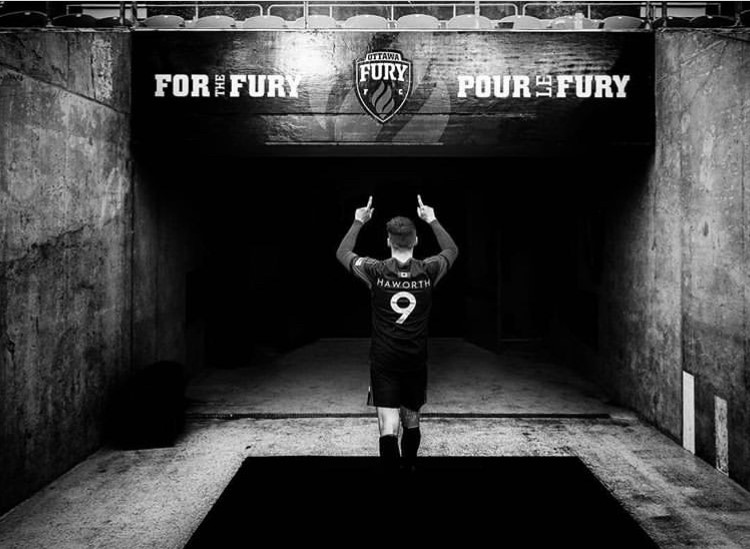 The Ottawa Fury hosted their first-ever USL Playoff match against Charleston Battery Wednesday night. The game lived up to playoff expectations as Battery took an early lead, but Fury equalized late in the first half. In the second half, Ottawa completely dominated every aspect of the game, but just could not find a way to put the ball in the net. The game went to extra time, and just like the second half, Fury did everything but put the ball in the net. This meant next up was the dreaded penalty shootout. Usually when one team completely dominates the game, but can’t score, and the game goes to a penalty shootout, that team loses. Sadly, this was the case for the Fury, as they heartbreakingly lost in Pens 5-4. This means that the Fury season is officially over.

The game was intense and took on a playoff feel. Despite a low attendance of just over 2500, the crowd was electric on all sides. Chants were being sung nonstop and a lot of the time, it was actually the Bytown Boys who were following the South Side chants. The crowd was firing up the Fury and trying to help them grab that last goal. Even after the game ended, fans stuck around to thank the players for a great season. One could see that the relationship between the players and fans had built throughout the season.

The 2019 season started off terribly with Concacaf almost banning the Fury from playing in the USL. Fans had no idea if there would even be pro soccer in Ottawa anymore. However, as the season began, it was clear what the Fury were doing for the community. More and more people started going to games and the atmosphere kept improving every home game. Through wins and losses, fans kept coming back and kept building that relationship between themselves and the team. The playoff match really summed up the whole season with fans showing their passion for this team. Despite the loss, players and fans were able to thank each other for a fantastic season.

My Biggest Takeaways From The Season

Ottawa Fury finished the season 14-10-10, good for 8th in the Eastern Conference. However, they were only 8 points off 4th place (less than 3 wins). Fury were 10-6-4 at Home (including Canadian Championship Games). After their first loss of the season at home, they went 11 games unbeaten until TFC finally knocked them off in the Canadian Championship. TD place was a fortress this season, largely thanks to the fans.

Carl Haworth had an outstanding season finishing with 10 goals and countless Man of the Match awards. His leadership was everything you could ask for, and he is the perfect example of what it means to play for the Fury. Whenever Fury needed a spark, Haworth was the one to step up. I have to admit, I’ve never seen so many beautiful freekicks in one season before. The only thing that was missing this season was a callup to the Men’s National Team. Still, this was a fantastic season for Haworth, and I have a feeling this is just the beginning.

When Maxime Crepeau left Fury for Vancouver Whitecaps, fans were left wondering about our goalie situation. That is when Callum Irving stepped up. Irving had a fantastic season finishing with 7 clean sheets. In close games, Irving single-handedly won points for the Fury with jaw-dropping saves. A team always plays better when they know they have a strong keeper in net, and it was clear to see that Irving was a big reason for Fury’s success this season.

Antoine Coupland. Remember that name because it’s going to be a name you hear a lot in upcoming Fury seasons. This 16-year-old completely captured the heart of the fanbase and quickly became a fan favourite. I still remember the first game he played. As he was getting called from the bench to be subbed in, the roar of the crowd was deafening and at the end of the game, he was the player that was surrounded by the most fans. He has a bright future and I believe the Fury are really going to turn him into something special.

CPL. This season was the inaugural season for the CPL, and it was a good season for them! However, for some reason they could not get over the fact that Fury didn’t join their league and it created a new rivalry for Fury. It was constantly Fury vs CPL with both fanbases going at each other online. The opportunity to quiet down one fanbase arose in the summer when Ottawa faced it’s first CPL opponent in the Canadian Championship. This opponent would be Halifax. This 2-leg series meant a lot more than just advancing to the semi finals. This was the first time Fury would face a CPL team. Fury ended up winning this series and personally, the 2nd leg was one of the best games all season. The atmosphere was electric due to numerous Halifax fans attending the game and it felt like a European match. I personally believe this rivalry is awesome and it will be fun to keep going once the Fury join the CPL. Every league needs that one team that everyone hates and we Fury fans are ready to be that one team.

I would like to end by thanking the Fury and all the fans for a great season. I’ve taken great joy in attending games and covering the Fury. This season it really seemed like the city of Ottawa was finally noticing we have a professional soccer team and started accepting them. The atmosphere kept improving at games and more kids kept appearing at games. This was a very important season for Ottawa, and I feel like they delivered immensely and now have something to build upon. While the result wasn’t what we wanted, the playoff match really proved that the Fury are wanted in this city and regardless of what league they play in, they have the support and love from us fans.

So, for the final time this season… ALLEZ OTTAWA ALLEZ!