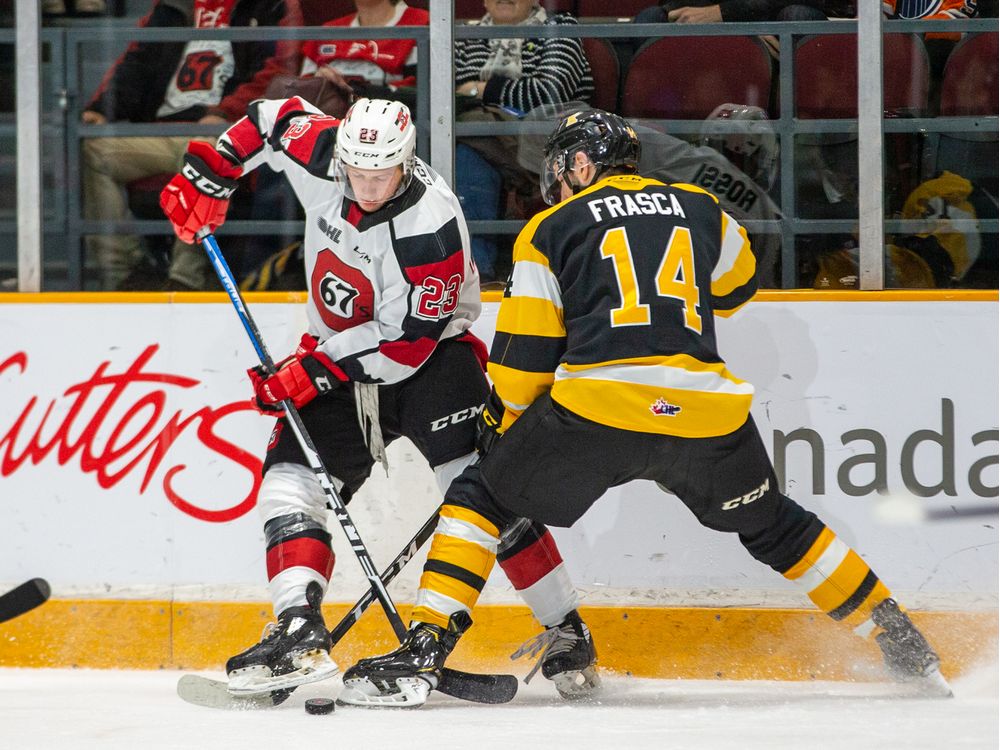 The 67’s capitalized on a rather easy weekend in a big way. With both the Kitchener Rangers and the lowly Sarnia Sting in town, the 67’s needed a big weekend to keep pace with both the Oshawa Generals and the Peterborough Petes.

Vs. Kitchener: The 67’s started this game like they start most games, and that’s down by at least a goal. Declan McDonnell tipped an Axel Bergkkvist shot past Cedrick Andree to give the Rangers a 1-0 lead mid way through the first period. Before the period would end, the Rangers would grow their lead to 2-0 after Reid Valade finished a cross crease pass from Ryan Stepien. Less than 4 minutes into the second period, the Ranger would get another one. This time, Riley Damiani scoring his 7th goal of the season, and just like that the Rangers took a 3-0 lead. If there is one thing the 67’s do very well it is comebacks. The comeback effort began with a power play goal from Jack Quinn, his 5th goal of the season. Less than 2 minutes later, Cam Tolnai was in the right place at the right time finally scoring his first goal of the season to cut the Rangers lead to 3-2. Less than a minute after the second goal, the 67’s found themselves on a power play once again, and they would make no mistakes. Joe Garreffa found Austen Keating with a beautiful back door pass and Keating would tie the game at 3. The next goal wouldn’t come until the 19:11 mark of the 3rd period, and who else but Noel Hoefenmayer would be the one to score yet another game winning goal? Noel has been on fire as of late, and he continues to prove that he is one of the best offensive defencemen in the entire OHL. I predicted a 67’s win in this game, inproving my record to 9-3

Vs. Sarnia: This game was never really in doubt from the word go. The 67’s came away with a 7-2 win and did all the scoring in the 1st and 2nd periods. The 3rd period seemed like they didn’t want to run up the score and the Sarnia players just wanted to get on the bus and go home. Here are the highlights:

This game taught us things we already knew, like Hoefenmayer is good, and Garreffa was a good trade. I predicted a 67’s win, improving my record to 10-3.

@Niagara: These aren’t the Niagara IceDogs the 67’s used to see in the playoffs all the time, but they can still be dangerous. They current sit in 7th in the east with a record of 5-7-2-1. Despite the record, they have 4 players averaging more than a point per game so far (Phillip Tomasino, Kyen Sopa, Akil Thomas, and Drew Hunter). The IceDogs are a weird team to understand this season. The have taken teams like the Oshawa Generals and the Flint Firebirds to overtime, but they have lost to the Steelheads and were blown out by the North Bay Battalion. I don’t expect the 67’s to walk into Niagara and get an easy win, they will have to work for it. To me, this game has overtime written all over it, and I do believe the IceDogs will get the better of the 67’s by a score of 6-5 in overtime in this game. You just never know what IceDogs are going to show up, but it seems they play their best hockey when the top teams in the OHL come to town.

@Erie: The Erie Otters are that team that I always forget exists. The 67’s only play them twice every season, and I can’t seem to remember any of them except for the game pictured below when Conner McDavid came to town. The Otters are current in 6th place in the west with a 7-5-0-2 record, and can only be described as mediocre at best. They don’t have any standout players, and the 67’s should be ready to take advantage of a weaker opponent, but sometimes you just don’t know. Hopefully the travel doesn’t hurt the 67’s as much as it could. I have the 67’s winning this game 4-2, and for the first time I’m going to predict a game winning goal scorer. Noel Hoefenmayer. How could you pick anyone other than captain clutch right now?

@Hamilton: For the second time this season the Ottawa 67’s and the Hamilton Bulldogs will clash in a battle of the first playoff round the past 2 seasons. The last time these two teams met, the 67’s edged out a 5-4 overtime win, because of course they did. Under regular circumstances, this is a game the 67’s should win, but I’m not convinced they wont come out slow due to the travel being done. On the other hand, the 67’s have done this trip in the past and have come out just fine for the Hamilton game. Based on the gap between the two team, I do believe the 67’s will find a way to once again edge out the Bulldogs, but not in overtime this time. I think we have all had enough overtime already this season, and a break from that would be nice. 67’s win 3-2.

The 67’s are currently sitting 5 points behing the Generals, and 2 points behind the Petes, but have 1 game in hand over both of them. It’s still early in the season, but every point matters. Winning the winnable games in front of you may not seem that improtant right now, but you don’t want to count on beating those two teams head to head, especially considering they have already lost to the Petes twice. This will be a tough trip for the boys, but it would be a good one to take at least 4 of 6 points from.

As always, be sure to follow me on Twitter @FrankieVideo and feel free to chat sports with me!