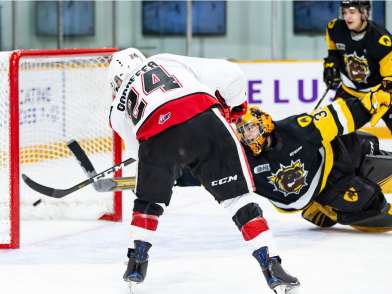 The Ottawa 67’s had a big weekend, and not just on the ice. After it was announced that the injury to Graeme Clarke was going to keep him out 4-6 months, GM James Boyd knew he was going to have to make a trade. More about the trade after the recap of the Friday game. As far as the games go, I was predicting a hard weekend for the 67’s, and the Petes once again showed us why they are one of the better teams in the OHL.

Vs. Peterborough: The 67’s welcomed the Petes to TD Place on Friday night for Friends Night. The 67’s wore special Friends themed jerseys as you can see below:

The first goal of the game wouldn’t come until the dying seconds of the first period when Liam Kirk some how scored from behind the goal line. These are simply goals that a goalie can’t allow. Cedrick Andree was caught napping, and it costed the 67’s a goal. Less than 5 minutes into the second, Cameron Butler finished off a passing play to make it 2-0. There was nothing Andree could do on this one. The 67’s would score late in the 3rd to make it a one goal game, but the Petes would soon after find the open net, and win the game by a score of 3-1. It’s very uncommon for Cedrick Andree to get outplayed in a game, but it happened Friday night. Hunter Jones won his team the game by making 32 saves. The soft goal Andree allowed came back to bite the 67’s in this one. I predicted a Petes win, improving my record to 8-2.

Joseph Garreffa: The 67’s made a trade on Sunday morning before their game against the Hamilton Bulldogs. The trade saw three 3rd round picks going to the Kitchener Rangers in exchange for OA forward Joseph Garreffa. Last season Garreffa scored 32 goals and had 55 assists, good for 87 points. The unfortunate part of this trade is it means Hudson Wilson will no longer be a member of the Ottawa 67’s. Hudson has been a member of the 67’s for the last 5 seasons, and there is no doubt he will be missed in the locker room.

Vs. Hamilton: The 67’s dominated the Bulldogs right out of the gate, but they always seem to start the game down 1-0. This game was no different. On a delayed penalty call, Nathan Staios scored to give the Bulldogs a 1-0 lead. Just minutes later however, Noel Hoefenmayer would score his first of the game to tie it at 1. The Bulldogs would get 2 goals in short order to begin the seconds period from Arthur Kaliyev, and Navrin Mutter, ending the night for Will Cranley. The 67’s did what the 67’s do best in the third period, and that was answer back. Noel Hoefenmayer scored his second of the game on a 5 on 3. Shortly after, Garreffa fed Marco Rossi with a beautiful pass, and he would tie the game at 3. Garreffa decided he wanted in on the goal scoring fun, finishing a great pass from Austen Keating on the back door. The 67’s don’t like to make things easy on themselves though, and Nikita Okhotyuk gave away the puck to Avery Hayes in front of the net, and he would make no mistake. We are once again headed to overtime. In the extra frame, Noel Hoefenmayer would score his 3rd of the game, giving the 67’s the win. I predicted the game would go to overtime, but I had Hamilton winning. Close only counts in horse shoes and grenades, my record is now 8-3.

Vs. Kitchener: The 67’s welcome Joseph Garreffa’s old team on Friday night, and having lost the previous meeting this season, the 67’s are looking to get back on track. The 67’s haven’t had much success in the past 5 years against the Rangers, with a record of 2-6-1 in that time, but I have a feeling that’s about to change. Garreffa should be coming out with something to prove, and I’m expecting a big night from him. Cedrick Andree had a poor weekend last week, and I’m expecting a bounce back weekend from him. The 67’s should have won the last game these two played, but I belive they are going to get some revenge in this one. 67’s win this game 4-1.

Vs. Sarnia: Sam Bitten and the Sarnia Sting come to town on Sunday afternoon, and much like Garreffa with the Rangers, Sam Bitten is going to have something to prove to his old club. The Sting have had a rough go of things to begin the season, currently sitting in dead last in the western conference at a record of 3-7. The only player the 67’s need to look out for is Sean Josling who has 20 points in 10 game so far. This game should be a game the 67’s win if they play their brand of hockey and don’t sink to the level of the opponent. The 67’s need to win some games, and a team like Sarnia is a great one to beat up on a little bit. For that reason, I think the 67’s win this game 6-0.

A big weekend would be huge for the 67’s at this point. The 67’s trail the Generals and Petes by 4 points, and sit in 4th in the east right now. Winning the winnable games is going to be important for the end of the season.

As always, be sure to follow me on Twitter and send me your predictions. Find me @FrankieVideo.