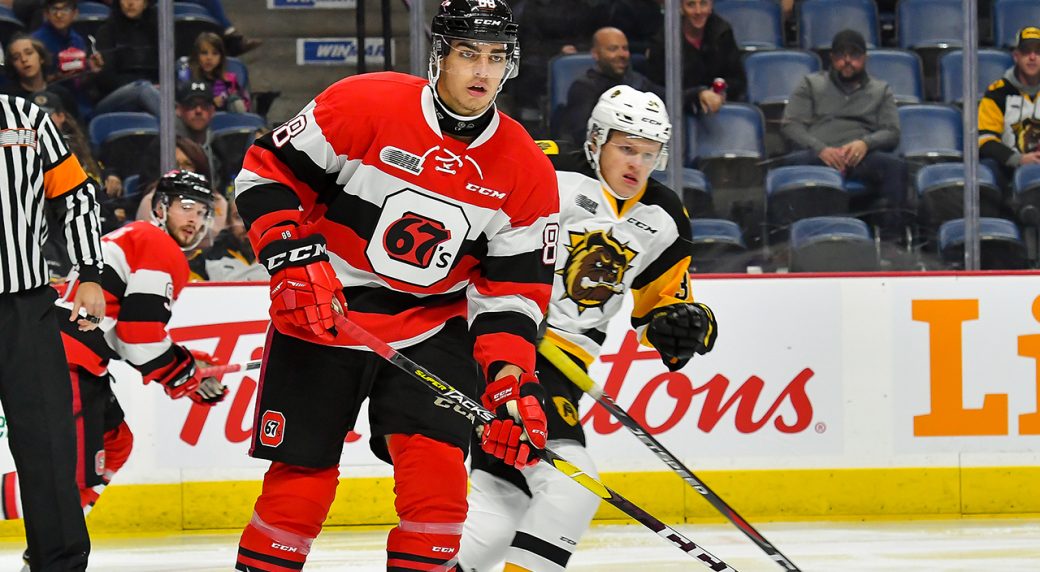 The Ottawa 67’s are 6-3 after a crazy duo of games at TD Place over the weekend against the Mississauga Steelheads, and the Kingston Frontenacs. The weekend came at a cost of Graeme Clarke, Quinn Yule, and Merrick Rippon who all suffered injuries over the weekend. I won’t talk about ways to work around the injury bug, but you can see that here:

Vs. Mississauga: When I said the 67’s needed a big weekend I wasn’t lying. It seemed as if they knew that before this game started. They played with pace and wanted to take the game to the Steelheads. Despite that, the Steelheads would score first when James Hardie scored a goal on the power play. That would be the last goal the Steelheads would score on the night as the 67’s would score 6 unanswered goals and win the game by a score of 6-1. The goals came from Graeme Clarke (2), Mitch Hoelscher, Kevin Bahl, Alec Belanger, and Teddy Sawyer who scored his first OHL goal. Here’s the goal:

For a kid playing in his first ever OHL game, Sawyer looked like a savvy vet. He seemed to always be in good position and wanted to battle all night long. The 67’s have been high on this kid since they drafted him, and we finally get to see why. We should see him in the lineup more frequently now, especially with the injury to Merrick Rippon. I predicted a 67’s win by a score of 7-1, and if the referee hadn’t have blown the whistle early to negate a 67’s goal, I would have been right in the score department. Never the less, this game improves my record to 6-2.

Vs Kingston: I honestly don’t know what to say about this game other than #NoQuit. Here’s the highlights.

There are no words to describe what this game was. I had Ottawa winning 6-2, and while I got the winner right, I couldn’t have been more wrong. This game was a thriller, and I think the highlights speak for them self. Obviously, there is lots of work to be done for Ottawa to avoid future outings like this, but the #NoQuit attitude is certainly back for a second round. My record improves to 7-2.

Vs Peterborough: The Petes come back to TD Place Friday night for an early season rematch. The last time they were here, they managed a 3-2 win over the 67’s. This time, I don’t expect much of a different result. With all of the injuries the 67’s have, I am expecting a rough weekend beginning with a 5-3 loss at the hands of the Petes. The Petes have the same 6-3 record the 67’s do, but the Petes are much healthier right now. For the 67’s to win this game, they will need to play virtually perfect in their own defensive zone, and they will need someone to step up into the role that is left vacant by Graeme Clarke. As I said already, Petes win 5-3.

Vs Hamilton: The Bulldogs have won their last 3 games, but still sit behind the 67’s record wise. Arthur Kaliyev and Jan Jenik have been white hot, with 19 points and 14 points respectively. Shutting those two down is going to be the key to victory for the 67’s in this game. I just don’t see the goal scoring happening in this game for Ottawa. Graeme Clarke has been so good this season, and we already saw what taking Marco Rossi out of the lienup did to the team. I wouldn’t be surprised to see the 67’s lose this game in a blowout, but I think the 67’s are going to get this game into overtime like they have so many times this season. I think Hamilton will win the game 3-2 in overtime.

This could be a very difficult weekend for the 67’s. Losing a gifted goal scorer and depth up front is going to hurt, no doubt. I hope I am wrong on both of these games, but I’m just not sure they 67’s have the depth to combat injuries as major as the ones they have right now.

As always, be sure to follow me on Twitter, and feel free to discuss OHL hockey with me at any time! Find me @FrankieVideo.