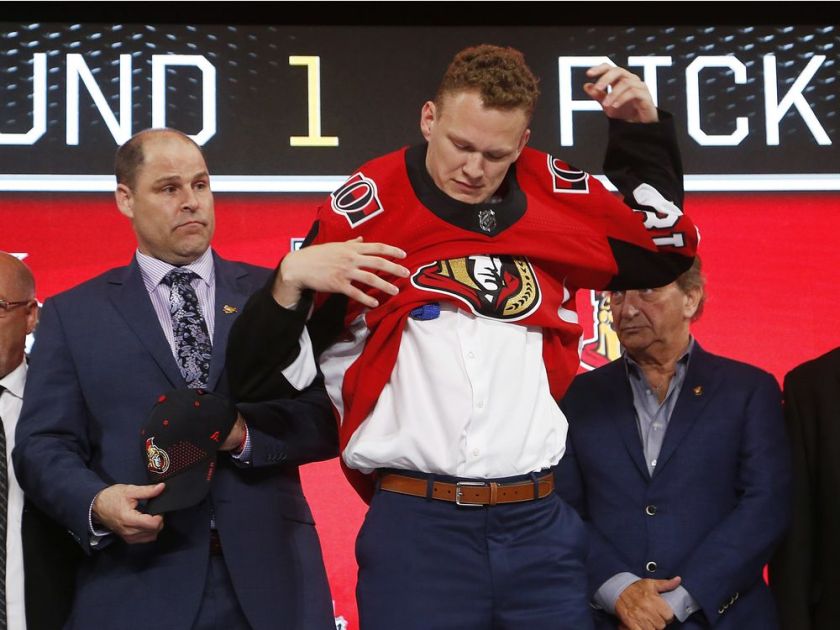 The 2019 NHL Entry Draft is tonight! Here we have composed a list of players the Sens could possibly draft with their first 3 picks. All research and analysis were made by our good friend @braedandaley12 who you can follow on that username on Instagram.

My favorite for the Sens to take at 19 if there. He’s built for playoffs, big 6’4″ frame, good skater and very smart and has an “Iron Lung”. Has a tendency to dump the puck rather then carry it in. Offensive upside isn’t super high but he is equipped with good passing skills and a wicked slapshot. His IQ and defensive skill is matched by very few in this draft, making him arguably the best Two-way Dman in the draft. Performed well in tournament play, showing both his offensive and defensive capabilities for Germany. Can most likely making the starting lineup on the 3rd pairing for the Senators .Will almost definitely develop into a strong top 4dman who plays big minutes.

High risk high reward prospect. Elite passer. Often times looks to pass versus taking the shot. Reportedly has a lack of heart for the game. Also doesn’t play physical. Also excels at skating and shot release when he uses it

Pure sniper. Has a very strong and accurate shot and great hands to match. Passing is also very strong. Was not very impressive in playoffs from what I saw. Laine/Hoffman comparison. Strong PP player but weak defensive play. Could be good if given mainly offensive zone starts.

Very strong skater equipped with great vision and high hockey IQ. Plays reactively making him harder to predict by defenders. Strong concerns that his shot isn’t NHL caliber. Most of his points come from his dominant skating ability and vision, not his puck skills. Very similar to Tyson Jost who also played in the BCHL prior to getting drafted.

I’m not a fan. Very similar to Gardiner, elite puck mover but poor defensive play, may have attitude issues (deflecting blame for poor performances). That being said he’s still highly skilled offensively and will be highly sought after if he falls to 19. 6 foot 2

Strong offensive skill with promising defensive skill to develop into a good two-way defenseman. Positioning at times is awkward or just poor but besides that he’s got a solid 200 foot game. Has a pretty good shot and is smart when passing. Has been compared to Thomas Chabot more than once, but so has Harley, scouts are weird like that.

If he’s available he’s a pretty low risk pick in my opinion. Already has developed a good two way game as a young russian player, with a quick defensive stick and a willingness to go into puck battles along the boards. His offensive game could allow him to get him into a top 6 role if he reaches his potential. He’s a creative winger who is good at dishing the puck out as well as firing it at the net with good velocity. Plays similarly to Filip Forsberg, creative power forward/sniper that doesn’t mind playing physical in both ends. Needs to add suitable muscle to play this style in the show, also worries that his skating isn’t very “explosive” but both these issues are pretty easily fixable.I’m expecting him to  fall on draft day because he’s a Right Winger and North American worry/bias against Russians (i.e. Podkolzin, Kovalchuk trauma). 6 foot.

Massive steal potential. Concerns are that his size (5’8″) and his below average footspeed will restrict him in the NHL from reaching his full potential. That being said I see him as the truer ‘Debrincat’ of the draft. He was one of the top scorers in the USHL. One scout compares him to Guentzel

An absolutely massive skater standing at just under 6 foot 6. Not to be fooled by his big frame, Vlasic can also skate very well considering his size. His offense stats don’t jump out at you but they aren’t exactly concerning either. Similar to his cousin (Marc-Édouard Vlasic) he plays a very strong defensive game, allowing for his D partner to make riskier offensive plays. Also not many negatives to his game, reportedly he needs to be meaner and seems nervous in the offensive zone at times. There is an untapped offensive upside to his game if he can add puck moving to match his skating ability. Pretty low risk and seems like very likely to make the NHL in some capacity.

High offensive upside defender, little on the smaller side standing at 5 foot 11 but has a high hockey IQ and skill. Skating is good but needs to improve to really become an offensive threat. Despite his size and skill set, is still a strong defender, reminiscent of Miro Heiskanen.

Not the flashy Offensive defenseman like some of the other dmen listed but Tobias is a very strong stay at home Dman with next to no offensive upside but was prefered to play big minutes by coaches in tournaments over the likes of Broberg and Soderstrom because of his steadfastness in his own zone. Would pair well with our other young offensive dcore. 6 foot

A project prospect but with potential to be a very effective offensive top 4 dman (similar to. Is comfortable with the puck and is able to move it well between zones. In the offensive zone he excels at creating chances for his team. Needs to work on his positioning in all zones when he doesn’t have the puck if he is to make the NHL. 5 foot 10

Clear cut best goalie of the draft. If he drops this far he’s 100% worth taking even though we have plenty of goalie depth highlighted by Gustavsson. No such thing as too many good prospects. Whichever of the 2 ends up being the lesser can be traded for more assets than a 2nd round pick. Value pick.

High offense dman. Great puck carrier and has a accurate and hard slapshot. Straight up just sucks at defense but his offensive upside is very high, similar to Honka but with slightly lower risk and ceiling. Is committed to play in the Finnish league. 6 foot