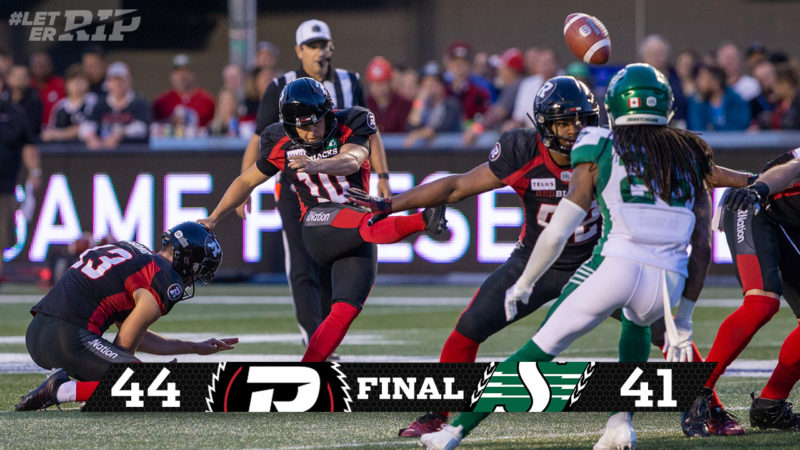 Boy was that a game. And the best part? Redblacks are now 2 and oh, and against western teams at that!

I’d be lying if I said I wasn’t worried this off season. Losing Trevor Harris, William Powell, Greg Ellingson, Diontae Spencer, and a few more key players forced GM Marcel Desjardins and Head coach Rick Campbell to work with a whole new offensive squad. But as it stands so far, we seem to be in good hands.

The green Riders shot first, but that merely woke the powerhouse that was the Ottawa offence, and despite the close score of 44-41, I’d say Ottawa dominated that game.

Davis threw for an insane 276 yards and 3 touchdowns. Ottawa’s offence accumulated 401 total yards. 4 receivers had over 40 yards, and Lewis Ward, as usual, not missing a single kick, even from 45 yards out.

And forgive me if I might be gushing, but Davis might be the best thing the Redblacks could have this season. One thing in particular I want to point out is the speed at which we throws his ball after the snap. Trevor Harris was a very accurate passer, but oftentimes he waited far too long before delivering the ball, and when the pocket collapsed, he was a sitting duck. Now Davis being quick to deliver the ball is excellent in multiple ways. He is infinitely harder to get to because the opposing defence has much less time to go through the offensive line. Davis is also a very mobile quarterback. He got 43 rushing yards total (longest 22) during the game, just 2 yards behind William Powell for the Roughriders, and the guy isn’t even a runningback! So even if the defence got through the Redblacks O line, Davis can move around and get to safety.

But I’m not done yet! Davis is also insanely accurate, even on the move, when his pocket is collapsed.

But that’s not to say it’s all positives. A 44-41 game is not a defenceman’s dream. The Redblacks offensive line will need to do a better job at protecting the QB, because the pocket collapsed way too often on Thursday night. If Davis was not a mobile QB, this would have been a completely different game that would probably have resulted in a Saskatchewan victory. And even at that, the Roughriders defence got 4 sacks during the game.

Next week is bye week time for Ottawa, so take the time to digest these two big victories. They’ll be back in week 4 to face the powerhouse that is the Blue Bombers.

I’m exited to see what this season will bring. So far, the Redblacks look like a solid team, and not like the 3-15 disaster a lot of people predicted. Although they look promising, anything can change, the season is still young, but for now, keep proving ’em wrong boys.