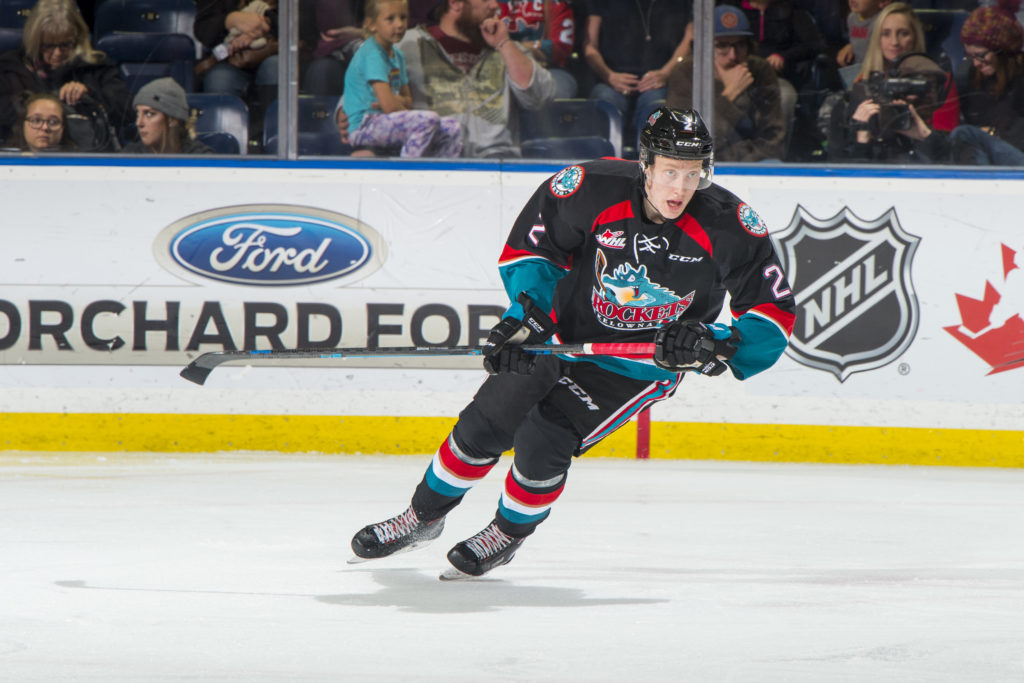 Thursday night the Senators’ prospects took to the ice for a Red vs. White Scrimmage. Team Red was highlighted by the likes of JBD, Logan Brown,  Alex Formenton and others. Team White was led by Drake Batherson, Erik Brannstrom, Rudolph Balcers and others. Regulation saw the game end 2-2 with goals coming from Batherson and Aspirot for team White, and Crookshank as well as Alsing for team Red. Veronneau and Abramov were the only players to score in the shootout. Below are some of our thoughts and observations from the scrimmage.

Søgaard and Daccord were the two goalies that really stood out in this game. Even with his monstrous height, Søgaard was still able to get down quickly to close up the holes. He also has very quick reaction speed with being able to track deflected shots and one timers. We didn’t really see him play the puck a lot but there was an aura of confidence that seemed to surround him.

Daccord kept his team in the game during the first period. He probably faced the most shots out of all the goalies but was very solid. He controlled his rebounds and didn’t give a lot of second chances.

Mandolese had an alright game but one can tell he is still has a way to go before even playing in the AHL. One thing to note is that in the shootout, both goals went fivehole on him and during the game he was giving up a couple bad rebounds with one leading to a goal.

Gustavsson had a pretty quiet night but he only played one period and that period his team controlled the play.

Pinto didn’t really catch any eyes unless you were focusing on him but you can tell there is a lot of untapped talent there. This was his first dev camp so he obviously was playing a little nervous. He seemed to be content with letting Batherson control the play and take a supporting role. One thing we did notice was that he had pretty solid board work and didn’t really make any major mistakes. Once he fills up more and gains more confidence we should see even more offense from him. Looking forward to see how he performs in next year dev camp. He is for sure more than 2 years out of the NHL however, and it’s still way too early to determine if he is worth the 32nd overall pick.

Abramov had a slow start to the game, he had a lot of chances but at the same time a lot of giveaways. His first period was best described as “Boom or Bust”. However in the second and third he really improved and was very noticeable. Although, as a 21 year old in a dev camp this was expected. One major thing he needs to work on is hitting the net. He had multiple open chances tonight and probably hit the net only 3 times. A good season in Belleville with lots of ice time should help solve that problem and if he does start scoring we could see him get a callup eventually as the Sens can use his speed on the 4th line wing.

Brown was one of, if not THE most dominant player in the scrimmage. Brown was however, expected to dominate a game like this as he has been in the Sens’ system for what will be three years now and has been one of their top prospects for just as long. He played like a man amongst boys at points and is FINALLY starting to use his size. On numerous occasions Brown didn’t shy away from mixing it up in the corners and came away with the puck more often than not. He also made multiple great takeaways and was very noticeable doing his best to get back on defense and break up plays. One thing I would love to see from Brown is him improve his ability to finish as he let multiple grade A chances slip away.

I’ll be honest, I was underwhelmed with this pick at the time. However, Thomson quieted any concerns I may have had. His skills were on full display in this game. He showed off his under the radar good hands with a very nice move to slip a forechecker in the neutral zone that got quite a reaction from the crowd. He also displayed his excellent offensive awareness making multiple jumps into the rush when he didn’t just take the puck and lead the rush himself. One concern that comes with defenseman jumping into the rush is them getting caught out of position, however Thomson has excellent closing speed and was not caught giving up an odd man rush once. His go to move his hustling back and angling the attacking player out and more times than not taking the puck back the other way. Also, for what it’s worth, when Thomson and Brannstrom were briefly paired together they dominated the game and controlled play for the entirety of these shifts. That could be a VERY fun pairing for us to watch one day.

Drake seemed to be on the ice every shift but that is expected from a player who played close to 20 games in the NHL last season. He had a very slow start though, with a big giveaway that lead to a 2on 0 break that ended with a goal. Drake also had a nice snipe beating Søgaard low glove side. In addition, Batherson also had an assist late in the game. He had a solid game but I was expecting him to really stand out, especially since he had that NHL experience. Perhaps it’s because he isn’t fully committed to Dev Camp, but overall he is almost NHL ready and will be there soon.

Formenton was one of the more disappointing players in this game. He played the majority of the game on a line with Brown and Veronneau which would be expected to dominate. Unfortunately for most of the game Formenton was completely unnoticeable unless we were specifically looking for him. This can be attributed to a few things, one of which being the game being played on the much smaller ice surface. Since the ice was so much shorter than an NHL rink Formenton was unable to stretch the ice as much which lead to a quiet performance. This isn’t too worrisome, but it definitely displayed just how reliant Formenton’s game and impact is on his blistering speed and ability to outskate others.

I’ve always had higher expectations for Nurmi than I probably should considering he was a 6th round pick. However, there’s just so much potential there that hasn’t been tapped into. Unfortunately he is starting to look like a second coming of Buddy Robinson of sorts. He is one of the biggest players on the ice and still gets pushed off the back way too easily and loses more puck battles in the corner than he should. Nurmi was drafted three years ago now and still isn’t strong enough to use his size to his advantage, which is a little disappointing. It’s not time to give up on him just yet, but he is definitely a year or two away from being close to ready.

Angus Crookshank was the biggest surprise of tonight. He was on his game and everyone noticed him on the ice tonight. Despite his small size of 5’10, 181 lb he was driving the net and getting between his defender and the puck. He was also not afraid to go into board battles against bigger players. He also scored a nice finish on the 2 and 0 break. Everytime he was on the ice, his team was creating chances. The biggest thing to note about this, is that he is only 19. Once he starts to fill up, we could have a very special player on our hands. Looking forward to watching him progress next season, he’s a prospect to watch for sure.