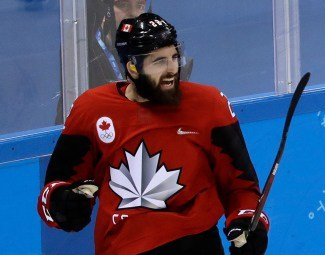 Eric O’Dell is currently a center for HC Sochi of the KHL. O’Dell was originally a 2nd round draft pick of the Anaheim Ducks in 2008. O’Dell has played for multiple organizations throughout his pro career and has represented Team Canada on multiple occasions.

Take a nap, listen to music

Beginning: O’Dell was born in Ottawa and played his junior hockey in the OHL for the Sudbury Wolves. However, O’Dell was actually drafted out of the CJHL (Jr. A) from the Cumberland Grads which makes it all the more impressive that he was able to earn his way so high up into the draft rankings. O’Dell also played on a stacked Team Canada at the U18’s which would be his first experience on the international stage.

Was there a defining moment that inspired you to pursue hockey as a full time career?

Having Success in the OHL really helped me realize that I had a good shot in the pro’s.

You were a fairly high pick in the NHL draft, what do you remember from the draft process? Was it stressful?

I remember how long the first round went and I didn’t get picked. Sitting there was a little nerve racking, but when they called my name in the second round all the nerves went away.

What was the experience like playing for your country in the U18 World Championships and having an entire country cheering you on?

It was great to see how many Canadians love hockey and will travel anywhere around the world to support the team. It was nice to get gold for our country .

What was it like playing on a stacked roster that included current NHL superstars such as Matt Duchene, Taylor Hall, Jordan Eberle and more?

It made it a lot easier winning games with superstars like that. All our lines were very strong, gave opponents a tough time.

Middle: After being drafted by the Ducks Eric was soon traded to the then Atlanta Thrashers. Due to this, O’Dell was a part of one the few relocations in the modern NHL. After years spent in the Atlanta/Winnipeg organization Eric would eventually sign back in his hometown of Ottawa with the Senators where he would spend the majority of his time in Binghamton.

What was it like being part of an organization during the relocation process?

It was tough for Atlanta prospects as Winnipeg was trying to get more of their prospects around the organization.

Did you feel that the move from Atlanta to Winnipeg could be a new start to your career?

I felt I had a great opportunity and a new start in Winnipeg, but they had core guys that were healthy all year round which was tough for prospects to get there shot in big roles.

You scored your first NHL goal in Winnipeg, could you describe that feeling scoring in front of one of the most electric crowds in the NHL?

One of the best feelings ever. Such a relief to get my first goal in front of the best crowd in the league.

In Jr. A you played a season with Jason Akeson, what was it like reuniting years later at the pro level?

I played against Jason growing up as well so to play on the same team as him and do so well together it was nice to see both of us do so well in our careers.

Throughout your career you’ve played with some very good players, who would your dream linemates be?

Two guys I would of loved to get the chance to play with now would be Scheifele and Wheeler.

Present: After spending 5 years battling for a spot on NHL rosters O’Dell made the decision to move his career overseas and start fresh in the KHL for HC Sochi. He has since gone on to help the team to the playoffs in his time there. He also garnered interest from Hockey Canada as a potential member of the Olympic team. He would end up making the team and help Canada battle its way to another medal.

Was there a deciding factor in making the decision to move your career overseas?

When you start getting a little older you try making good decision for you and your family also later in life, so money was a big decision in heading overseas.

Can you describe your Olympic experience?

My Olympic experience was amazing. So hard to explain how fun it was being with the guys and how we got treated. It was really a dream come true.

When you heard that the NHL wouldn’t be going to the Olympics, did it occur to you that it would give you an opportunity to represent your country?

I knew there was a possibility of making the team. Once we participated in tournaments and I played well it started to hit me that I had a good chance of making it.

You played for Canada earlier in your career, was the Olympic tournament similar or was it a totally different experience?

It was totally different. Hockey Canada does a great job with there athletes, but go above and beyond with the Olympic team.

Are there any major differences playing in Russia compared to North America?

It’s definitely a different game. not as physical as north america, bigger ice surface really makes you skate much more.

Was it a goal of yours after winning gold in 2008 to play for the Maple Leaf again in your career?

For sure, the feeling I had winning gold in 08 was amazing and wanted to experience that again.

If the opportunity presents itself would you return to north america?

Eric O’Dell has played for many different teams with many different players throughout his career and has made memories that will last a lifetime. He has had the honor of suiting up for his country on multiple occasions and won a medal in both attempts. There aren’t many players who can boast such an accomplishment and we appreciate him taking the time to answer some questions for us!