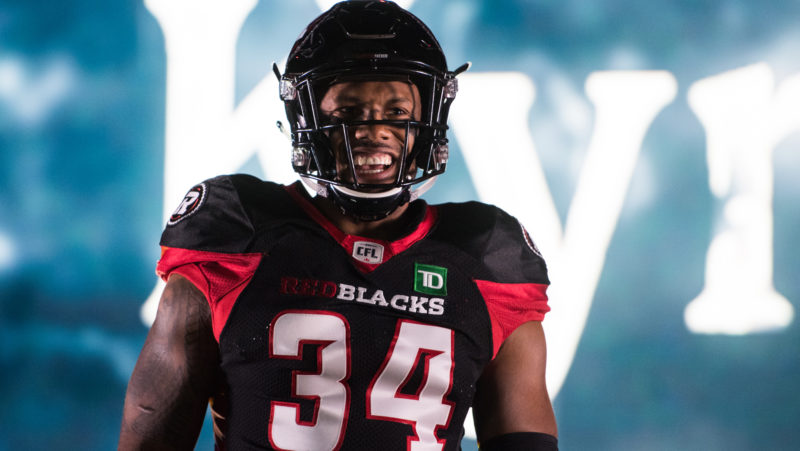 The 2017 season wasn’t the best for the defending Grey Cup champions, as they would once again post a 8-9-1 record for the second straight year and ultimately lose to the Roughriders in the East Semi-final at home. In the offseason, GM Marcel Desjardains went to work in hopes of being a Cup contender once more. This off-season saw changes (majorly to the defense) and only time will tell if they were the right ones, however, now with mini camp over and the draft done I will sum up what Desjardains was up to while we waited for CFL football to return.

February 13th 2018 saw the opening of the free agency period for the CFL. The REDBLACKS went all in on defense picking up DL A.C. Leonard (Saskatchewan), LB Mitchel Barnett (Hamilton), DB Loucheiz Purifoy (B.C.). later pickups on Feb 14th WR Julian Feoli-Gudino (Winnipeg), LB Derico Murray as well as D-linemen Cameron Walker on the 15th and Daryl Waud on the 20th (Toronto) and also that day Michael Klassen (Calgary) and most notably on the 16th of February the best signing of the year as those who have cheered on the Renegades (like my self) are familiar with Linebacker Kyries Hebert who started his CFL career in Ottawa for the Renegades in 2004 and became a huge fan favorite. Hebert had 122 tackles, 57 special teams tackles, 1 sack and 5 INTs, 2 Fumble recoveries and 3 D-TDs as he played for the team for 2 years until the team folded in April of 2006. He was picked up after being released from Montreal. He is the last Ottawa Renegade still in the league. (Right in the feels.)

Jan 30th Ottawa sent Patrick Lavoir (FB) to Montreal for Jean-Christophe Bealieu (FB). This was a straight up trade.

Feb 5th Edmonton trades to Ottawa DL Odell Willis for DL Jake Cenesa. Ottawa not even 30 minutes later flips Willis to BC for a 2018 4th round draft pick.
2018 Draft Review:

The CFL draft for those unfamiliar with it is not like the other major 4 league drafts. It’s less glamorous as it takes place over the phone but is televised. The draft is comprised of 8 rounds, 69 total selections. The drafting order is the reverse of the standings so the last place team in 2017 (Montreal) picked first. then it fills up in the standings #8 goes 2nd #7 goes third and so on. The Grey Cup champion (Toronto) picks 9th and the runner up (Calgary) goes 8th. Who gets selected is Canadian eligible players from the U-Sports and Canadians playing in the NCAA typically the ones who gets drafted is O-linemen, D-linemen, D-backs and receivers . In this years draft here is who Ottawa selected as their default position is 4th in each round.
1st Round:
4- OL Mark Korte, Alberta,
2nd Round:
13 – WR Marco Dubois, Laval
3rd Round:
22 – OL Andrew Pickett, Guelph
4th Round:
29 (Via BC)- DL Kene Onueka, Carleton
30 – LB Mickael Cote, Concordia
5th Round:
Ottawa traded pick to Calgary when they acquired Drew Tate.
6th Round:
Ottawa forfeited their 6th round pick when they acquired Austin Reuland in the 2017 supplemental draft.
7th Round:
55 – DB Justin Howell, Carleton
8th Round:
64 – OL Jacob Czaja, St. Fancis Xavier

Also to note how the supplemental draft works:

The Supplemental draft is for players who did not submit the correct paper work for the regular draft. Teams don’t have rounds nor picks in the traditional sense. Teams pick by a bidding process in which the teams bid by the highest pick in next years draft. So Ottawa got a player in which the highest pick Ottawa used to pick for Reuland was their 2018 6th round pick. This can happen any time during the season.

Overall the offseason was good for Ottawa in ways that help strengthen the defense which was really needed. The shoring up and locking up with the extensions of major receivers and running backs. The changing of coaches and the drafting of big O-linemen which in theory helps the weak O-line that needed some depth after major injuries plagued them. The thing that was needed the most is a quality backup QB but I have already made thoughts on that topic in an earlier post. One thing I didn’t get however was Marcel’s decision to flip Willis to BC, but that might be cap issues but it still left me really scratching my head.
So this concludes the changes made to the team in the offseason. How do you think the team will do this year? Let us know on our Twitter, Facebook and Reddit