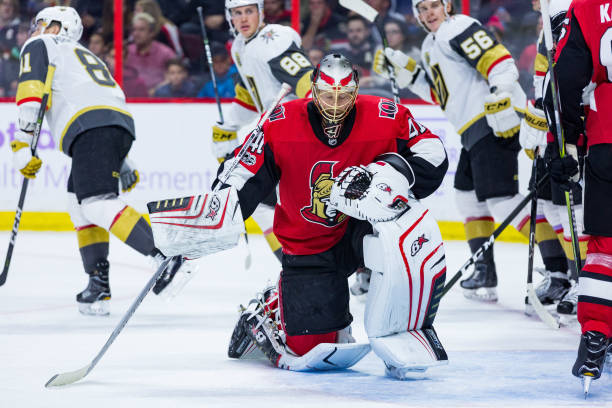 The next part of this series will see us grade the Senator’s blue line and goaltending.

Ottawa as a whole finished 30th in the league in Goals Against with 291 goals allowed and with a 895 Save %. Erik Karlsson and Thomas Chabot were the only defencemen who deserved an “A”. Even though Karlsson missed almost the whole month of October, he still finished off the season tied for first in points for the Sens with 62 and is in contention for another Norris this year. Karlsson is a generational talent and year after year he will be a top defenceman for Ottawa. As for Chabot, even with Boucher not wanting to play him in the beginning of the season, he still came out and proved to the league that he will be a top defenceman. He finished off the season 8th on the team in points with 25. 8 of those points coming on the powerplay. He was excellent on the back-end with only a few mistakes that are expected at his young age and at times he looked more confident in his own end than veteran players on the team. If Chabot gets the minutes he deserves next season, he will be an excellent defenceman and will be vital for the Sens future.

The drop off after Chabot and Karlsson is so immense that it was tough finding any defenceman to put in a “B” grading. However, in my opinion I believe Mark Borowiecki deserves that grade. Even though he was injured for a part of the season, whenever he played Boro always brought the physicality. He was always the one to step up for his teammates and always played with his heart and soul. Even though Boro is not known for his offense, he still contributed with 11 points which was more than what Claesson and Harpur tallied combined. Boro was one of the only defencemen who was consistent throughout the year and Sens fans should be happy with the way he played. Next year you should expect the same from him.

As for the “C” rating I believe only 1 player deserves this and that player is Cody Ceci. The only reason Ceci is here instead of lower is because he played the most amount of games on the team and finished with 19 points. Once again his pairing with Dion Phaneuf was phenomenal and totally didn’t make Sens fans want to pull their hearts out everytime he had the puck in our end. He lacked confidence all year and had many giveaways and still Guy Boucher gave him top minutes. Many games he was playing more minutes than Karlsson, and making twice the amount of mistakes. This season he did not look like a player who’s played in 5 NHL seasons. However, the funny thing is that once Phaneuf left, Ceci’s play began to improve. Hopefully next season, Ceci will get a defence partner who can cover for his own, and Ceci can start playing with more confidence and start putting up points as we all know he can do. I believe there can still be a bright future for Ceci but he needs to start stepping up his game.

Now for the final grade of “D” you will find: Mike Condon, Craig Anderson, Freddy Claesson and Ben Harpur. Starting with the two goalies, they were terrible. Andy posted a .898 Sv% and had a 3.32 GAA. Condon was no better posting a .902 Sv% and had a 3.25 GAA. The goalies were probably the biggest let down of the year. In close games they would let easy squeakers go by and whenever the team needed a stop they couldn’t provide. This was the reason that Sens were always down early in games. And the bad thing was that there was no escape. If you pulled Andy, Condon was no better. The Sens defence couldn’t rely on their goaltenders and this caused them to be too cautious in their own end which created giveaways. Collectively in a 82 game season, they only had 2 shutouts. Now historically, Andy usually does this. After having a stellar playoffs, he will play poorly the very next season. However my issue is that Condon was no better. In 31 appearances he only won 5 games and that is unacceptable as a backup. If the Sens want to appear in the playoffs next season, it is no question that the goalies will need to step their game up. As for Claesson and Harpur, they were absolutely invisible. They couldn’t do anything on the offence and they couldn’t do anything on defence either. Call Ups from Bellville such as Jaros and even Sieloff contributed more to the team than those two. They gave up pucks constantly and whenever they were on the ice, you wanted to jump out a window. The strange thing is that they played very well in the playoffs last season and looked very confident. I am hoping that just like the goalies, this was just a down year and next season they will bounce back. Because if not, they won’t be playing much longer in Kanata, especially if the Sens get a new coach.

The Sens defense and goaltending is a huge question mark going into next season. Some additions need to be made to improve the overall depth while young players like wolanin, Jaros, and Gustavsson get ready to make the jump to the NHL. Having Karlsson back next season and the addition of a certain 17 year old Swedish defensemen would definitely help shore up this but for next season.