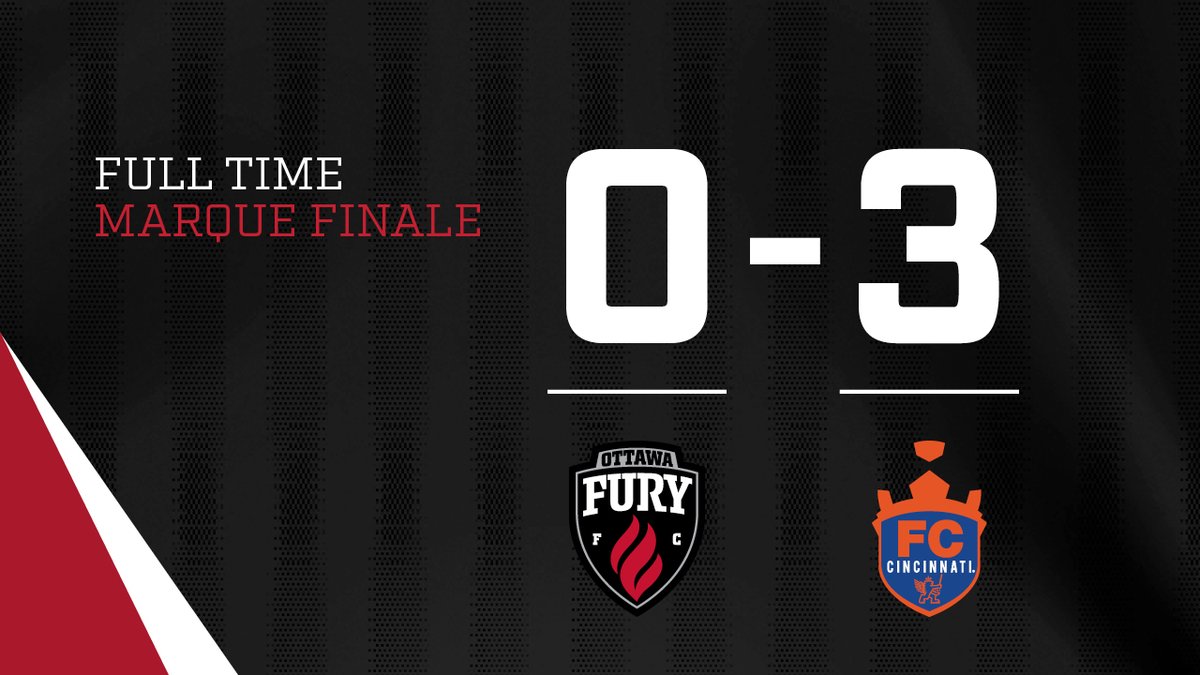 The Ottawa Fury headed into this game looking for their first win of the season against Cincinnati FC. They were in for a tough game as Cincinnati was coming in at 4th place in the Eastern Conference. The game started off slow as both teams were playing strong defensive games. Ottawa had next to no chances early on as the fullbacks were not joining in on the attacking play. However, once they started joining in, Fury saw their fair share of possession and had a couple of good chances. The half finished 0-0 with Fury having the slight advantage.

The second half was when everything went to kaka. Cincinnati came out guns a blazing and Fury were pegged back in their own end for 15 minutes. The defensive unit fell apart and Cincinnati were sending a lot of penetrating balls into the Fury end. The score could have easily been 3-0 after that 15 minute spell, but thanks to Maxime Crepeau, the game remained 0-0. In the 69′ Cincinnati stunned Ottawa with two goals in under 60 seconds and from then on would add another to win the game 3-0 and to take all 3 points.

The game had a slow start with both sides testing each other’s defence. Ottawa’s back line stood strong and shut down all of Cincinnati’s opportunities. Once Edward and Manesio started joining the play on the flank, Ottawa began to see more opportunities come their way. The problem was that they were missing that one penetrating pass in the attacking third to grab a goal and majority of their chances came from outside the box. Still however, they ended the half with a slight advantage as they were the better side.

The second half was a completely different story. Fury did not come out to play and they were running around the field chasing the ball. The defensive shape was gone with players not knowing who they were marking and Cincinnati players slipping through to grab chances. Fury had next to no possession, and when they did they had no outlet to pass to up front. Ottawa gave up around 3-5 breakaways in the second half as Cincinnati recognized that the Fury players were flat footed and weren’t able to get to the penetrating passes. If it wasn’t for Crepeau, the game could have easily been 5-0 and that is why he was our Man of the Match.

We saw two different Fury sides today. The first half side was defensively great. They were able to control possession and get some penetrating passes in once the fullbacks joined the play. All that was missing was that final pass in the attacking third to send a player in alone on goal. The second half however was completely trash. The defensive shape was thrown out the window. Players were running around aimlessly and when Fury eventually did get the ball they were not able to do anything with it and that is what cost them the game.  It is still early in the season and I strongly believe Fury will start winning soon. All they need to do is play consistent football (not two different halves) and start connecting more in the final third. Once they do that, they will be scoring and winning games left right and centre.

Thanks for reading! This was our first attempt at a Fury recap. Please tell us what you think and whether we should keep doing these or not! Also follow us on Twitter, Facebook and Reddit for Ottawa Fury FC updates and all Ottawa sports teams!