A Season to Forget 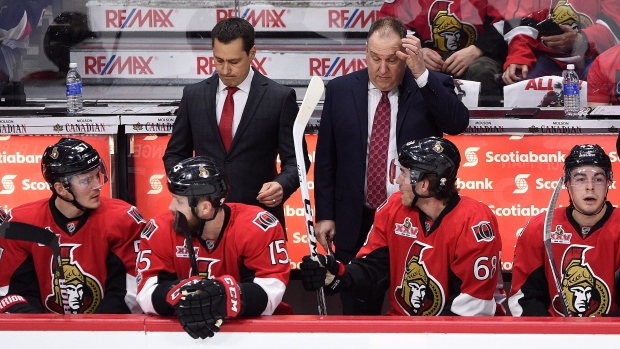 Ladies and Gentlemen, you can uncover your eyes now. This dreadful season has come to an end. After being one shot away from a Stanley Cup Final berth last season, your Ottawa Senators completely blew it this season, finishing 30th with 67 points and sharing the basement with the Arizonas and Buffalos of the league. So what happened?

Well if you remember, the Sens started off the season promisingly. They finished October with a 5-2-5 record, placing them near the top of the Atlantic Division. However, this was sadly their only good month, because they finished November with a record of 3-7-1. So clearly November was the turning point of the season. On November 5th, Ottawa made a blockbuster 3 team trade, sending Kyle Turris, Andrew Hammond and prospect Shane Bowers to the Avalanche (Colorado moved Turris to Nashville to complete the 3 team trade), while getting Matt Duchene back. The Sens would then play two games in Sweden vs the Avalanche and win those two games. Sadly, the rest of November was dreadful as the Sens would go on and lose 7 straight games and only one coming in overtime.

December was no better as the Sens finished the month with a 4-8-2 record. During this month the Sens would have a 5 game losing streak and a 4 game losing streak. However, the main event of this month was the NHL 100 Classic which was played by Ottawa vs Montreal at TD Place. The Sens had an Alumni Game at Parliament Hill, two nights before and that is when I personally believe the season fell apart. At the Alumni Game, Eugene Melnyk decided that it would be a good idea to come out in public and complain about the lack of attendance; call Sens fans out for not being true fans; tell everyone that the Lebreton Deal was falling apart and who can forget: He threatened to move the team. Now obviously, Sens fans didn’t take too kindly to these remarks and they went on Twitter and started a #MelnykOut protest which ended up being the 4th most trending tweet in all of Canada in one day. Now take into consideration that this weekend was supposed to be a time of celebration and coming together as fans, but Eugene basically declared war on Sens fans and the whole weekend was ruined. The Sens ended up winning the NHL 100 Classic game, but it was clearly overshadowed by Melnyk’s remarks.

January continued down the path of unwatchable hockey as the Sens finished the month with a record of 3-7-1…. Again. Ottawa lost 6 regulation games in a row (The first time since 1996) and it was all in all a terrible month with fans going at Eugene Melnyk any chance they got. Also, this was when the #MelnykOut billboard discussion started.  As the month of February came around, it was clear that the focus would be on the trade deadline. The Sens were well outside of a playoff spot, so it was obvious for the fanbase that Ottawa would be sellers. And that is exactly what they did. The Sens traded Chris DiDomenico to the Blackhawks, Phaneuf and Thompson to the Kings, Brassard to the Penguins, and the Flyers claimed Oduya off waivers. However, no one expected the Sens to try to trade Karlsson, but that was the story all month long. And as the trade deadline approached and rumors were circulating that the Sens were willing to take a discount on Karlsson if a team took Ryan as well, it was clear to see that Sens fans were terrified and it showed in the Season Ticket Renewals. When the trade deadline finally arrived, the whole city held their breath… and when the clock struck 3:00 and fans learned that Ottawa had not traded Karlsson, everyone was joyful. However, that joy turned quickly to anger and shock as fans couldn’t believe that the team would not only try to trade a generational talent, but to take a discount just to get rid of a bad contract. That evening, #MelnykOut was trending again in Ottawa.

Ottawa finished March with a record of 6-9-1 and on the 22nd they were eliminated from playoff contention. However, the talk of March were the #MelnykOut Billboards that went up around the city on March 19th. The fanbase was clearly divided on this issue as half the fanbase thought that the billboards were a waste of money and that Melnyk would never see the signs, while the other half believed that the signs were godsend. Well Lo’ and Behold Melnyk did see the Billboards and he called for a couple Town Hall meetings in April. The Sens capped off the season in April with a 1-3-0 record and finished the season in 30th place, giving them a 13.5% chance of winning the draft lottery. At the end of the last home game for the Sens, Karlsson went and picked up the puck, sparking an outcry from Sens fans that made #MelnykOut trending on Twitter again for the third time.

The 2017-18 season was a tumultuous one to say the least. The season began with much hope from the team and fanbase, but ultimately fell flat. This summer will be critical for the future of the franchise from an on-ice aspect and business side. The team appears to be at a crossroads, will they trade away players and begin a rebuild or will they try and bolster the current lineup and compete for a playoff spot again next season? It will definitely be an interesting off season to say the least for the team and the split fanbase.

What are your thoughts on this “exciting” season? Let us know down below on the comments, Twitter, Facebook and Reddit. And stay tuned for an End of Season Report Card!

2 thoughts on “A Season to Forget”