The Red and Black Plague 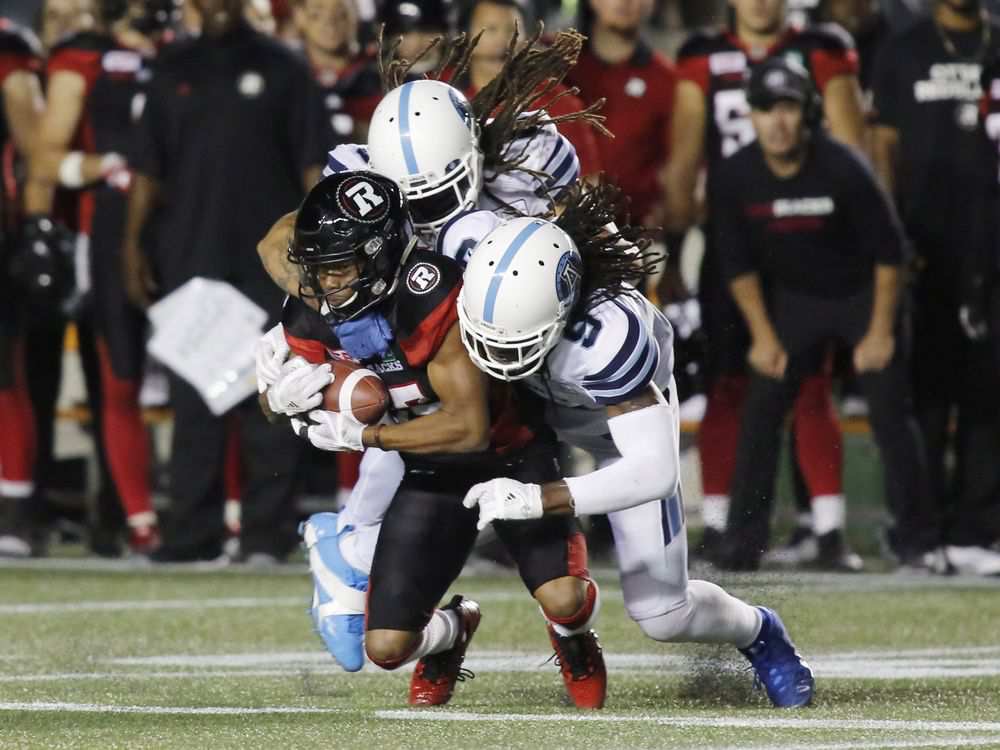 1-6-1. No these are not lottery numbers, this is the record of the defending Grey Cup Champions, your Ottawa Redblacks. With a record like this, you might think that the Redblacks have been atrocious, however that is not the case at all. In total the Redblacks aggregate this season is 215 – 229. That’s only a 14 point difference. Basically the Redblacks have been outscored this season by 2 touchdowns. Now with a stat like that, you would think that they would have won more than 1 game, but they haven’t. So who is to blame for this disaster in the 613?
Earlier last week, recently retired 3 time Grey Cup champ and the hero of the Redblacks, Henry Burris dropped some tweets that lit up RNation and got everyone talking. This is what he tweeted.

So basically his tweets are calling out the management for letting some key players go in the offseason. I half agree with Henry in these tweets as I think that the management did a lackluster job this offseason keeping the team together. The RedBlacks lost multiple key players in Ernest Jackson, Chris Williams, Abdul Kanneh and Travon Van and it appears to be coming back to haunt them. The RedBlacks are lacking offensive weapons outside of Ellingson and Sinopoli, they are also missing a true shutdown corner who can be physical and make big plays. However I do not agree with Henry saying there is a lack of leadership on the team now. The Redblacks still have a great Quarterback in Trevor Harris, great wide receivers in Greg Ellingson and Brad Sinopoli and also Jerrell Gavins at Defensive Back. These players and others all won the Grey Cup last season, so they have the experience and leadership to help lead this young Redblacks team this season.
Henry Burris thinks it’s lack of leadership and poor management that is the cause of this plague. What do I think? I think it is the coaching. With a 1-6-1 record, most people will think that teams are beating the Redblacks. However a lot of the time the Redblacks are beating themselves. For example in the Winnipeg game, the Redblacks had a 30-23 lead with 5:21 to go in the 4th quarter. They held the Bluebombers to a field goal making the score 30-26. Now you would think a Grey Cup winning coach would be able to call some nice plays and get the win. However their drive fizzled out and Winnipeg got a field goal and an extra point off the kickoff to tie the game with 51 seconds remaining. Alright, here is the plan, put together a decent drive, get the ball into field goal range and kick it for the win right? Shouldn’t be too hard with all the weapons on their team right? But noo, drive fizzled out again and instead Winnipeg kicked for the win, winning a 33-30 decision. Now that is what I call poor coaching. With a 7 point lead with 5 minutes to go in the CFL, you would expect the Redblacks to have the ball a couple of times and be able to put more points up. But they didn’t and instead allowed 10 points in 5 minutes. How? How is that possible. Poor play calling led to the loss in this instance and has lead to this 1-6-1 record. In my opinion, the organization needs a shakeup, whether it is a big trade, signing a player from NFL training camps or a change to the coaching dynamic, something must be changed, because it is unacceptable to be beating yourselves. Not even losing! But beating yourselves is a big No-No.
Now I might be overreacting a tiny bit, but i’m a big Redblacks fan and I want this team to make the playoffs. And it is still possible! The East is so weak that if we string together a couple of wins, we would be right in a playoff spot. However what makes me mad is the way we are dropping points. It is unacceptable and something needs to be changed. This is my opinion, tell me what yours is by tweeting at us @613_sports or commenting on our Facebook Page.

One thought on “The Red and Black Plague”