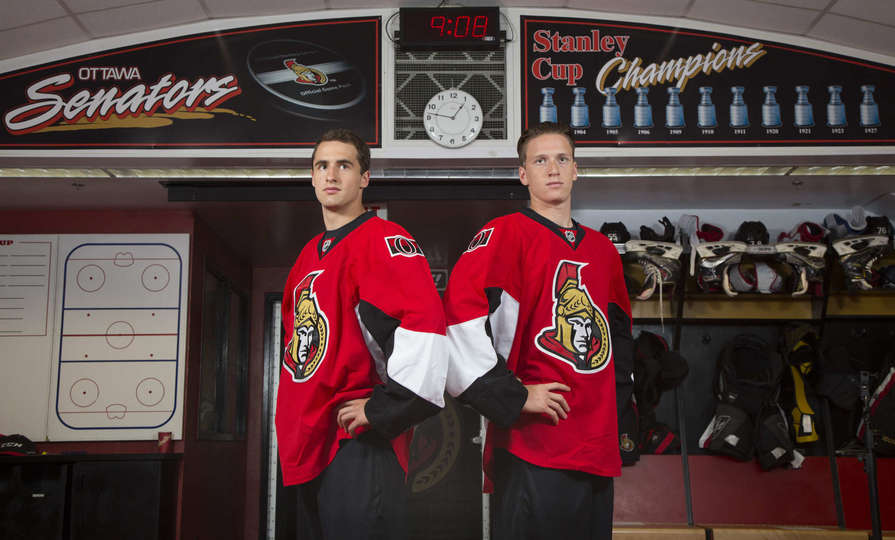 We’re at the point in the off-season where many fan bases compile their team’s prospect pyramid. For those of you unfamiliar with the concept, it is essentially a way to rank a team’s prospects into groups, without projecting what line or potential role the player might play in the future. Basically, Tier 1 prospects are the best the organization has to offer, Tier 2 would be a step down from that and so on.

The first tier of the Ottawa Senators prospects is rather simple to put together, except for one exception. It is obviously Thomas Chabot and Colin White, as they are a clear cut class above everyone else in the Sens system. After debating way longer than I should have, I decided to include Logan Brown in this tier. The 2016 11th overall pick still has great potential and has a very real chance of being a number 1 center in the NHL. Although Brown did struggle a little this year, as he had an injury plagued season, he did finish as a point-per-game player and was crucial to his team the Windsor Spitfires winning the Memorial Cup. Although Brown is not a sure fire NHLer like White or Chabot, his potential still warrants him being in the same tier as them.

The second tier still includes players very likely to have long NHL careers, they just don’t have a high enough ceiling to warrant them being in the same discussion as Brown, Chabot and White.This tier includes some players who have been in the Sens system for a few years, as well as one new face. The second tier is made up of Shane Bowers, Filip Chlapik, Andreus Englund, Ben Harpur, and Marcus Hogberg. These players are all at different stages of their development. Shane Bowers is just at the beginning of the developmental process; however, he does project out as a top 6 forward in the future and should have a very long and successful NHL career. The next name in this category is a rather intriguing one. Filip Chlapik had an outstanding year in the QMJHL, causing scouts and the organization itself to be very excited for his future. Look for Chlapik to play on a top line this year in Belleville, as well as challenge for some powerplay time. Andreus Englund should begin the year on a top defensive pairing in Belleville and may even get into some NHL games this season, if the Sens run into injury trouble again. I considered not even including Harpur on this list, since he played so many games down the stretch last season- he’s not really considered a prospect; however, because his role on the team is not guaranteed for this upcoming year, I decided to include him, as it is possible he sees some games in Belleville this year. Marcus Hogberg had an outstanding season in Sweden last year, and finally came over to North America before the end of the season. Hogberg is expected to be crucial to the Sens goaltending in the future and is set to compete for the final goaltending spot in Belleville with Chris Driedger this upcoming season.

Tier 3 is made up of some very different players, it includes some players who will challenge for a spot on the opening night roster but, have low ceilings. It also includes some players who have the talent to be a borderline tier 1 prospect but have struggled so far in their development as well as a few late round picks, who are looking like they may be diamonds in the rough. Tier 3 is made up by Alex Formenton, Drake Batherson, Gabriel Gagne, Christian Jaros, Nick Paul, Filip Ahl and last but not least Francis Perron. Alex Formenton remains in the early stages of his development process, as he continues to grow into his 6’2” frame and attempts to increase muscle mass. However, Formenton is a tremendous skater and is believed by many to have been the fastest skater in the 2017 draft which is very promising considering the Sens view him as an offensive threat winger in the future where speed is crucial.

Drake Batherson is a bit of an unknown player for the time being, though he had a great development camp and appears to have plenty of skill; however, his ceiling is yet to be determined. He will play an important role in the Cape-Breton offense this upcoming season. Gabriel Gagne is a prospect who has the talent to be a potential tier 1 prospect yet, he has not been able to have an overly productive season since being drafted by Ottawa. The Senators knew Gagne was going to be a project when they drafted him but I’m sure they would have hoped he’d be farther along in his progress by now. Management fell in love with his size and goal scoring ability. Gagne is 6’5″ and is touted to be a pure goal scorer however, he had an abysmal year in Binghamton last year only scoring 2 goals in 41 games and he even spent some time in the ECHL. This is not what you’re hoping for from a 36th overall pick in a stacked draft class. It is crucial that Gagne has a bounce back year in Belleville, this upcoming season. Christian Jaros has been the prospect receiving plenty of hype from the organization this summer. The Sens have fallen in love with Jaros’ work ethic and it is believed he may get into some games this season. Another prospect who has an opportunity to make the team out of training camp is Nick Paul. Paul had a very disappointing season last year, as he failed to earn a call-up to the NHL even though the majority of his teammates did. It is crucial for Paul to earn some NHL games this season, or it is very likely he will fall out of favor with the organization quickly. This is the final season of his contract and he needs to show the organization he can still be a useful player down the road. Filip Ahl has all the tools to be a pretty good power forward in the future, he is listed at 6’4″ and 225lbs. Ahl needs to work on his skating and improve his foot speed before making the jump to the NHL. He will be playing the upcoming season in Sweden as he has decided not to return to the Memorial cup host Regina Pats. The final prospect of Tier 3 is 2014 7th round selection Francis Perron. Perron had an incredible close to his junior career as he took home both the QMJHL regular season and playoff MVP awards. Perron had a bit of a down year last season, being expected, as it rightfully took him some time to adjust to pro hockey as he is on the smaller side at 6’0″ and 163lbs. Look for Perron to have a bounce back season and contribute much more offensively to the revamped Belleville Senators.

The final tier is made up of prospects who are either late round picks or mid round picks who have had injuries derail their development to date. This tier includes Jordan Hollett, Todd Burgess, Max Lajoie, Markus Nurmi, Christian Wolanin, Joey Daccord, Miles Gendron, Shane Eiserman, Macoy Erkamps and Kelly Summers. Todd Burgess is a rather intriguing prospect, he has decent skill but he has not played a game since the Sens drafted him in 2016, due to injuries. Hopefully this is the year he can get healthy and show the organization and fans what he is capable of. Markus Nurmi is another project selection who has the height (6’4″) but still needs to bulk up (176lbs). Nurmi was invited to take part in the summer showcase for Team Finland and can hopefully make his way onto the roster and gain valuable experience at the World Juniors.

The Senators cupboards are starting to replenish after a rough few drafts. These prospects will hopefully continue to develop into strong NHL players or valuable trade assets. At the end of the day, drafting is really all about asset management and the Sens have done poorly with that in the past. Hopefully, these recent strong drafts have put the Sens on their way to a brighter and more successful future.

One thought on “Prospect Pyramid”