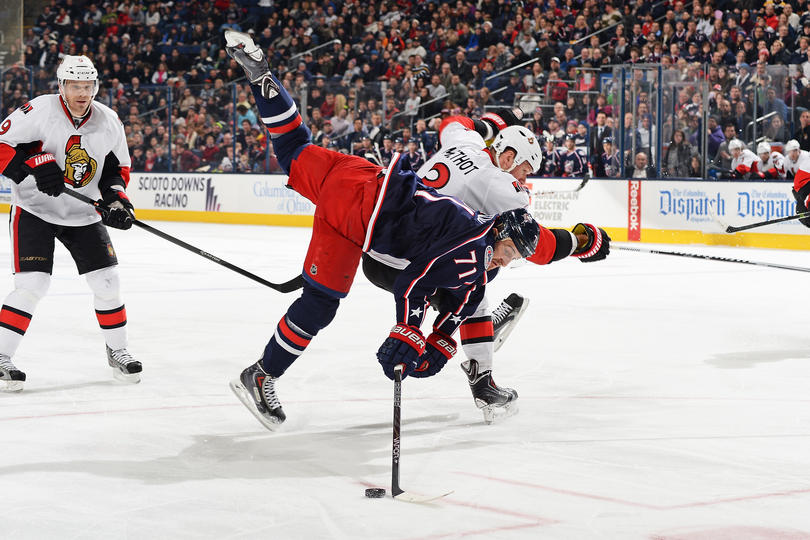 Last night the NHL awards took place. The Las Vegas Golden Knights announced their team and some trades that were made. A brief recap from the Senator’s point of view: Erik Karlsson was nominated for the 4th time for the Norris Trophy, the award would however go to Brent Burns. Sens GM Pierre Dorion was nominated for General Manager of the year, the award would end up going to David Poile of the Nashville Predators. The third and final Senator nominated for an award was Craig Anderson. Andy was nominated for the Bill Masterton award for perseverance. Anderson would take home the award which was one of the highlights of the night. Now onto the expansion draft, the Las Vegas Golden Knights would go on to take Marc Methot from Ottawa as everyone expected.

Personally the awards were a bit of a bust. Karlsson was robbed of his third Norris and it is absurd that two voters left him off their ballot all together. Burns was a very deserving candidate Karlsson was just better overall plain and simple. Burns won for the same reasons Karlsson lost last year.

Dorion really was not deserving of the GM of the year so I have no complaints with David Poile taking home the award. Poile has been an outstanding GM for years and that Subban trade was a work of art.

Anderson was extremely deserving of the Masterton and all the best wishes to his family.

Now onto the expansion draft. Vegas claimed Methot from Ottawa as everyone expected. I am very sad to see Methot go but hockey is a business and these things happen. I’d personally like to wish Marc the best of luck wherever he ends up playing this season. I’ll still be rocking my Methot jersey with pride at sens games. Although many fans are acting as if the sky is falling, losing Methot won’t harm the sens as much as you may think. First of all the money freed up from dumping Methot’s 4.9 million dollar cap hit should allow the sens to lock up Pageau to a long term contract as he is currently an RFA. Also the sens have plenty of internal depth that can fill the slot left open by Methot’s departure. Karlsson himself has stated he is fine playing with Claesson who obviously is not the same level of player as Methot but can be close enough by the end of the season. Also Chabot is coming through the system and should be more than capable to fill the void by the start of the 2018 season. So yes although this makes the sens a worse team as of today, it really does not harm them long term.

The Norris Trophy, the great prize that all defenceman want right? The key word there being “defenceman”. Last year, Karlsson did not win the Norris Trophy because he was too “offensive”. This year however, he changed his game; finishing with a +10 and scoring 71 points. So logically, you would think that he would win the Norris, right? However, the Norris Trophy was instead given to Brent Burns, a former forward, just because he finished with 78 points. Well excuse me, but last season Karlsson finished with 82 points and he still wasn’t given the Norris because he was considered too “offensive”! Why isn’t the same standard being applied to Brent Burns? Oh yeah, I had forgotten that NHL media is the most biased and pathetic group I have ever seen. Take this in: some reporters did not even have Karlsson as a top 5 defenceman! How? I thought the Norris was supposed to be awarded to the best defenceman, not highest scoring defenceman. I guess it is awarded to the highest scoring defenceman, as long as Karlsson isn’t the scoring leader.

In other news from last night, the Golden Knights took the hometown boy Marc Methot. Yes, we Sens fans are not happy, but if you take a look at it logically, it is not that big of a deal. Erik Karlsson can play with any defenceman, he doesn’t need Marc Methot. In fact, Marc Methot needs Erik Karlsson; however losing Marc is a big loss to the community. He was always active in charities and involved with the city, and he was a fan favourite for sure. Marc played for the Sens for 5 seasons, but it feels like it had been much longer. He had graced us with his solid defending, and from time to time, his timely goals. Oh yeah, how can we forget his signature hip checks; every time he made one, the crowd rose to their feet cheering for Marc Methot. Off ice, Methot was a very friendly guy who was willing to stop and have a conversation with you. He was also very active on social media and chances are if you hit him up, he would reply to you. There is almost nothing you can find wrong about him. I like Methot a lot and he was one of my favourite players. Me, alongside many other Sens fans, will miss him for sure, and we all wish him the best in the future.