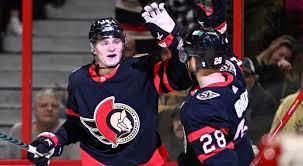 The Ottawa Senators started 2023 in the win column after defeating the Buffalo Sabres, who have been red hot lately, 3-1 at home on Jan. 1. They enter the new year with a 17-17-3 record (37 points) and sit in sixth place in the Atlantic Division. After a tough start to the year, the Senators now find themselves only seven points back of the 19-11-6 Pittsburgh Penguins who hold the final wildcard spot in the Eastern Conference.

The Senators knew they needed a strong start to the season to remain in contention for a playoff spot come the new year, however, injuries and poor play hindered the Senators’ ambitions.

The Senators struggled mightily in October and November, finishing the season’s first quarter with a record of 8-13-1.

In December, the players found their groove and the Senators went on a nice run, winning eight of their 14 games and matching their win total from the previous two months. They’re currently 1-0 in January.

Two of the big reasons for the Senators’ great run of form in December are their goaltending which has become consistent and their special teams which have been incredible.

Cam Talbot is 10-9-1 this season with a .911 save percentage and 2.74 goals-against-average and has been particularly good as of late, recording a save percentage of over .900 in four of the last seven games and a goals-against average of 3.00 or less in three games. The Senators have been allowing a lot of shots in recent games, including allowing 51 in their win over the Boston Bruins, the best team in the NHL this year. Both goalies have needed to be sharp; recently they have been. In Anton Forsberg’s last five games, he’s recorded a .928 save percentage and a goals-against average of 2.24 which is very good, his best game came against Buffalo yesterday where he stopped 33 of 34 shots in a 3-1 victory.

Their powerplay converted at a ridiculous 34.6 percent pace in December, which has propelled them to having the third-best powerplay in the NHL this season, scoring on 28 percent of their chances. Their quick and efficient puck movement on the powerplay helps create space for players to get open and create scoring chances and they’re quick to set up in the offensive zone after gaining entry on the man advantage, they don’t waste a lot of time.

The signings Pierre Dorion made this summer have also worked wonders in helping the offense improve and put together excellent performances consistently.

Alex Debrincat has been a presence in the attacking zone all season with his excellent shot and quick release. He is always a threat to score and can set up his teammates with ease with his excellent puck movement and playmaking skills. He has been anchoring the very efficient first powerplay unit alongside Brady Tkachuk and Tim Stutzle and Debrincat has 36 points (13 goals, 23 assists) in 37 games, which is just shy of a point per game, which is extremely efficient.

Claude Giroux has been an excellent anchor on the second powerplay unit, great in the faceoff circle, his physical play in the neutral zone creates turnovers and opportunities in transition for the offense and his playmaking, passing, and speed are great. Giroux has 15 goals and 19 assists for 34 points in 37 games this season and has been a leader in the locker room.

Brady Tkachuk, Tim Stutzle, and Drake Batherson, who have all been on the team for multiple years are all having a spectacular season and are huge reasons why the Senators are trending slightly upwards. Tkachuk does a bit of everything, he has phenomenal playmaking ability, he has an incredibly accurate shot with a quick release, he is a pure goal scorer, he is very physical, not afraid to throw the body around and chips in defensively. He leads the Senators in assists with 25 and points with 38 and also has 13 goals. He has been extremely efficient on the powerplay too with 16 points (five goals, 11 assists) on the powerplay.

Drake Batherson has stepped up big and is on pace for the best season of his career. His best season was last year when he recorded 17 goals and 27 assists for 44 points. He already has 12 goals and 23 assists for 35 points in 37 games this season; with more than half the season remaining, if he can stay healthy, he is on pace for a 75+ point season. He has stepped up in the absence of Josh Norris – another Senators’ offensive weapon – who is out long-term with a shoulder injury. There is a chance he may make a return in February, which would be a huge boost for the Sens if they find themselves in the playoff race.

Finally, Tim Stutzle rounds out a skilled group of young offensive weapons for the Senators with 14 goals (including two against the Sabres on Jan. 1) and 19 assists for 33 points in 33 games, exactly a point per game. He is very speedy, has great hands, has a nose for the net, is an unbelievable playmaker, and can make any pass to any teammate anywhere on the ice. He is also extremely versatile and can play on the wing and as a centerman. When he plays center, he’s extremely efficient in the faceoff circle, winning almost 43 percent of his draws. That’s extremely productive for a young all-star; his potential and skill have translated to results on the ice this season and last year during his career-high 58-point campaign. If he continues playing as he has in the first half of this season, he could reach 75-80 points, which would topple his previous career high.

The Senators are also getting excellent production from rookie forward Shane Pinto, who has proved himself as a capable player at an NFL level, scoring 10 goals and 17 points in 37 games. He has a powerful shot with a quick release, a great hockey IQ and vision, has great hands and chips in defensively.

Ottawa’s defensive core has been a problem recently, more specifically the depth behind their first defensive pairing has been a problem. Thomas Chabot has been incredible defensively this season, which is outstanding considering how much ice time he gets per game. He has been in the top 3 of ice time per game for numerous seasons, led the league in 2019-20 with 26 minutes per game, was tied for the lead with Seth Jones in 2021-22 at 26:13 minutes per game, and is fourth in the NHL this season with 26:08 per game. He is physical, not afraid to lay the body to make a play, is great at blocking shots, and excels at closing off shooting and passing lanes with his body. Not only that, but he contributes offensively with seven goals and 13 assists for 20 points this season and is a great playmaker, especially on the man advantage where he captains the first powerplay line alongside Tkachuk, Stuztle, and Debrincat.

Jake Sanderson and Artem Zub – who the Sens recently signed to a four-year, $18.4 million extension – have also been really good while playing a lot of minutes. Jacob Bernard-Docker has not played very much this year but has shown signs of being a defensive anchor in the near future.

The sooner the Senators get guys like Artem Zub, Josh Norris, Tyler Motte, Mathieu Joseph, Nikita Zaitsev, and Eric Branstrom back from injury, the better. This team needs to be fully healthy if they intend to make a playoff push. It’s hard to tell who will be back from injury first, however, it looks like Branstrom and Joseph will be back in the lineup first.

Below that, Eric Branstromm, Nikita Zaitsev, and Nick Holden have all been underwhelming, making numerous mistakes in coverage, missing assignments and giving pucks away in their own end and the neutral zone, missing breakout passes, etc.

The Senators will need to acquire another top-tier defenseman if they want to make a run and contend for a playoff spot this season, which is not impossible but will take a lot of work and many things to go right. Some names to consider are Arizona Coyotes’ defenseman Jacob Chycurin, Vancouver Canucks’ defenseman Tyler Myers and San Jose Sharks’ and ex-Senators defenseman Erik Karlsson, which is the most unlikely of the three. Any of these deals, however, would require the Senators to give up a large haul including a first-round draft pick, a current top 6 forward (like Norris or Pinto), and potentially even a prospect (like Pinto, Lassi Thompson, or Ridley Grieg).

The Senators can still contend for a playoff spot, being only nine points back of the final wild-card spot in the East, however, it is hard to make up ground in the NHL. On Dec. 1, before the Senators’ 9-4-2 run (in December and into the first game of January), the Senators were 10 points out of a playoff spot. After all that, they’ve only made up three points. It will be extremely difficult to make the playoffs, but it isn’t impossible, especially if they make some acquisitions at the trade deadline and continue the good run of form they had in December. It looks like they will continue their good form after a dominant win against Buffalo.

The Senators won some close games in December, that is a necessary skill in the NHL especially because many playoff games are close down to the wire and they will have to keep grinding out results in close games to keep winning and get more experience on the roster.

The Senators’ will host the Columbus Blue Jackets on Jan. 3 in another important game to make up ground in the Eastern Conference playoff race.