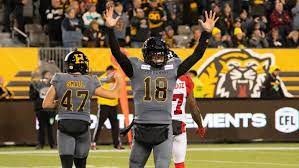 The Hamilton Tiger-Cats escape with a narrow 30-27 win against the Ottawa Redblacks and improve to 7-10 on the season thanks to a 30-yard field goal from Tiger-Cats’ kicker Seth Small as time expired to improve to 4-1 over their last five games. If the Saskatchewan Roughriders lose to the Calgary Stampeders on October 22, the Tiger-Cats will officially clinch a playoff spot.

With the loss, the Redblacks fall to 4-13 on the season – 1-2 under interim head coach Bob Dyce – and have been officially eliminated from playoff contention with one game remaining this season. The Redblacks have now not made the playoffs in three consecutive seasons.

Credit to the Redblacks for keeping this game close and competing until the end, but they just didn’t do enough to seal the victory. A few mistakes throughout the game ultimately came back to haunt them.

With the powerful winds at Tim Horton’s field affecting the passing game for both teams, the ability to set the tone with the run game was critical in deciding which team would emerge victorious.

Both Caleb Evans and Dane Evans were great in the run game today, scoring two touchdowns. Redblacks’ backup QB Caleb Evans set a CFL record for the most rushing touchdowns in a single season by QBs and leads the league with 15. Dane Evans rushed five times for 21 yards and two TDs.

Both teams were effective on the ground, using it to move down the field and open up holes in the passing game. However, the Tiger-Cats were the much better team on the ground, which ultimately helped them secure the victory.

The Tiger-Cats rushed for 177 yards, including an impressive 104 yards for Sean Thomas Erlington on 13 carries. The Redblacks had 74 yards on the ground, 63 of which came from Jackson Bennett, who has been playing well in place of the injured William Powell.

However, eight of those 17 points – a Tiger-Cats touchdown and two-point conversion – were a “give me” resulting from a huge completion at the end of the third quarter from Dane Evans to Anthony Johnson that set up the Tiger-Cats at Ottawa’s one-yard line. The other nine points came from three field goals from Seth Small, who hit five of his six field goals on the night.

Lorenzo Mauldin got his CFL-leading 16th sack of the season on the Redblacks’ opening defensive drive to force a fumble and set up the Redblacks’ in scoring position – but the Redblacks decided to punt from the Tiger-Cats’ 31-yard line instead of trying a field goal to take an early lead which was a strange decision.

However, the Redblacks did not get another sack against Dane Evans or backup QB Matthew Schiltz for the rest of the game, despite getting a lot of pressure – so huge credit to the Tiger-Cats’ offensive line.

But the Redblacks had two key takeaways including a third-quarter interception by Monshadrik Hunter inside the Redblacks’ 30-yard line to keep the Tiger-Cats off the scoreboard and preserve his team’s 21-13 lead. The second was a forced fumble by Bradin Dandrige, who ripped the ball out of Steven Dunbar’s hands before taking it to the house to give the Redblacks a 14-10 lead. That defensive score was the second of three Redblacks touchdowns in the second quarter – the other two courtesy of Caleb Evans – to give Ottawa a 21-13 halftime lead.

The Tiger-Cats’ defensive line was stellar in the second half, after a decent first half, finishing the game with three sacks, including two from big man Micah Johnson which forced Redblacks’ punts and a strip-sack fumble by Cedric Wilcotts which led to Dane Evans’ second touchdown run to give the Tiger-Cats a 24-21 lead at the start of the fourth quarter.

The Tiger-Cats did leave a few points on the board, with Small’s missed field goal, the Monshadrik Hunter interception, and a few other mistakes and opportunities throughout the game, but were resilient and found ways to win, which is what they have done over their recent win streak on their journey to clinch a playoff spot.

R.J. Harris was the leading receiver for the Redblacks with seven catches for 62 yards, three other receivers had over 30 yards. For the Tiger-Cats, it was their two main guys delivering huge performances on the big stage: Tim White had seven catches for 113 yards and Anthony Johnson had four receptions for 75 yards including setting up the TD in the fourth quarter that gave his team the lead.

The Redblacks were able to tie the game 27-27 with a 51-yard field goal from Ward, his second make on two attempts, but a big kickoff return, a 25-yard run by Matthew Schiltz who came on for the injured Dane Evans, and a 20-yard screen pass to White set up Small for the game-winning kick as the time expired.

If the Roughriders beat the Stampeders on October 22, the Tiger-Cats will have to beat the Redblacks again, on October 29 at TD Place, to clinch their fourth straight postseason berth.