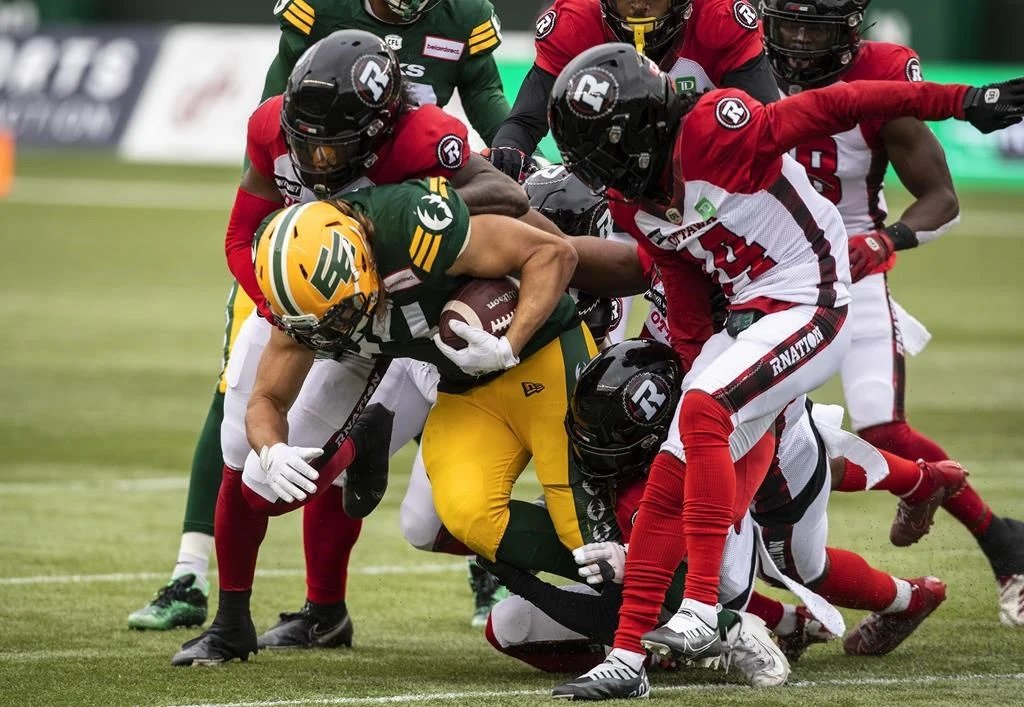 Paul LaPolice made the quarterback change that fans have wanted for multiple weeks, by electing to start Nick Arbuckle over Caleb Evans ahead of their rematch against the Edmonton Elks. It paid off as the Redblacks got their revenge on the Elks after a 30-12 loss last week.

The Redblacks got their second win of the season by beating the Edmonton Elks 25-18, thanks to a fantastic first half from the Redblacks’ defense, which only allowed three points, Nick Arbuckle who completed 13/17 passes for 148 yards, and one rush TD, Caleb Evans who had two rush TDs, and Nate Behar who had his first 100+ receiving yard game, with four receptions for 101 yards in the first half alone. He finished with 101 yards and two of his catches directly led to points.

The Elks got on the board first with a long drive to the brink of the Redblacks’ red zone, which led to a 33-yard field goal by Elks’ kicker Sergio Castillo, but the Redblacks’ defense shut out the Elks’ offense for the rest of the first half.

The Redblacks scored 20 consecutive points to end the half and take a 20-3 lead with three long drives in which the offense drove the ball downfield consistently. Arbuckle didn’t panic, didn’t make any significant or costly mistakes, and used his legs to extend plays by giving receivers time to get open. He also didn’t force much; instead, he took what the defense was giving them and completed many short passes to open receivers that led to yards after the catch, leading to first downs to keep the drive alive.

Even with a quiet first half from the Elks, there were still some positives. Wide receiver Kenny Lawler proved why he is one of the best receivers in the league. He had two catches for 102 yards in the first half (54 and 48 yards) and added another 44-yard catch (to up his total to 146 yards) which set up a Taylor Cornelius four-yard rush TD on a QB draw. Two of Lawler’s three highlight reel catches helped set up the Elks’ opening field goal and their first TD.

Near the end of the third quarter, a huge stop by the Redblacks’ defense, the Elks who were backed up at their own three-yard line, conceded the safety to avoid punting to special teams weapon Devonte Dedmon, who’s back in the CFL after a stint with the NFL’s Miami Dolphins. The Redblacks now led 22-10.

After struggling a bit in the third quarter, throwing for less than 40 yards, Arbuckle found his groove again in the Redblacks’ first drive of the fourth quarter, making numerous accurate throws and smart decisions. A few huge runs and 22 rush yards from Devonte Williams, who started after an injury to William Powell, helped Arbuckle’s momentum. Unfortunately, the Elks’ 20-yard line would be as far as they’d get. The Elks’ front four brought immense pressure all night long and on 2nd&10, an Elks’ defensive lineman hit Arbuckle’s arm as he threw it which forced the incompletion. Kicker Lewis Ward drilled the 28-yard field goal to extend his team’s lead to 25-10.

Elks’ QB Taylor Cornelius wasn’t great today but wasn’t horrible either. Despite his three large completions to Lawler which made up the majority of his yards, he wasn’t nearly as effective as he was in the second half of the Elks’ 30-12 rout of the Redblacks last week. His stat line was respectable; he completed 11/30 passes for 270 yards, and two rush TDs. His only big mistake was an interception in the first half to Redblacks’ linebacker Avery Williams which led to a TD.

Down 15, Cornelius was calm in the pocket and made some nice throws to move the ball downfield. Backup QB Kai Locksley took it 21 yards on a receiver sweep which set up Cornelius at Ottawa’s one-yard line. He took it in for a one-yard rush TD and ran in the two-point convert after a defensive pass interference penalty brought the ball to the one.

Only down 25-18, the Elks had all the momentum, and the Redblacks’ offense needed to respond with a big drive. Arbuckle went deep twice and both times it fell incomplete. The first pass was defended nicely by veteran DB Ed Gainey. The second pass was ruled a catch by Jaelon Acklin but overturned after a successful challenge by Elks’ coach Chris Jones. Acklin had control of the ball as he was falling down but he used the ground to secure it.

The Redblacks’ defense needed to make a final stop to help secure the win. The secondary played very well to force two incompletions and on third down, the front four converged on Cornelius to make the tackle short of the sticks. That was Edmonton’s fourth turnover, the Redblacks only had one.

The Redblacks’ offense had the chance to seal the game but a two-and-out caused by a sack from Elks’ DB Enock Makonzo – the Elks’ second sack – gave the Elks another chance on offense. Three incompletions by Cornelius caused by excellent pressure from the Redblacks’ defensive line forced a fifth Elks’ turnover and sealed the win for the Redblacks.

One thought on “Arbuckle shines, Redblacks’ defense holds on late to seal the victory”