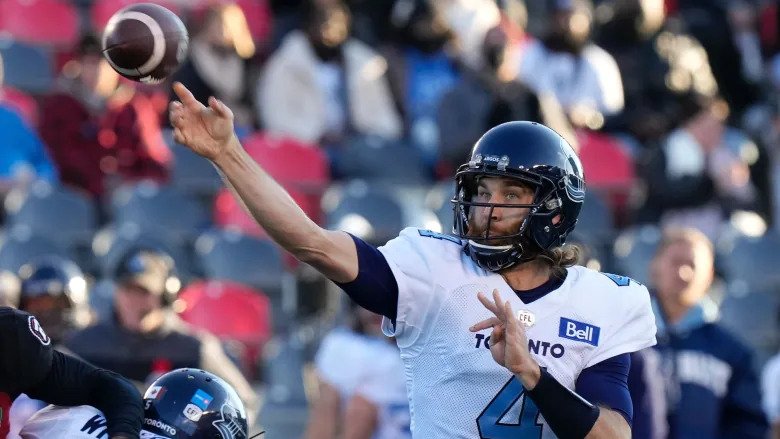 The Ottawa Redblacks, fresh off back-to-back wins against the Edmonton Elks and Montreal Alouettes on the road, came into today’s game against their provincial rivals with a 3-8 record, 1.5 games back of the 5-7 Alouettes for second place in the East Division, looking for a third straight win for the first time since 2018 with their playoff chances still very much alive.

Despite a strong second half from the Redblacks on both sides of the ball, they struggled to generate anything on offense in the first half. The Toronto Argonauts’ lead was too big to overcome and while the Redblacks’ playoff hopes are still mathematically alive, their path to the postseason got tougher with a 24-19 loss to the East Division-leading Argos. The Redblacks have now lost 20 of their last 21 home games, a horrendous feat.

The Argonauts moved the ball meticulously and efficiently down the field and they opened the scoring with a 51-yard field goal from kicker Boris Bede, the 200th of his career.

A few drives later, after getting a stop on defense, Argos’ quarterback McLeod Bethel Thompson led his team on another long 11-play, 95-yard drive downfield, which was capped off by a two-yard TD run from running back A.J. Ouellette, his first of the season.

After a few more drives from each team resulted in punts, the Argonauts drove down the field again, but had to settle for a 17-yard field goal from Bede after the Redblacks’ defense bent but didn’t break in the red zone. The Argos’ lead grew to 13-0 and they led by 13 because they were able to move the ball downfield. The Redblacks couldn’t consistently move the ball until late in the first half and it hurt them.

Redblacks’ kicker Lewis Ward hit two field goals – from 48 and 47 yards out – on two consecutive drives before halftime to cut the Argos’ halftime lead to 13-6 and to regain a bit of momentum, but for a team preaching all year to finish drives with touchdowns instead of field goals, they struggled to find the endzone.

The Redblacks recorded only 103 yards of total offense in the first half (90 through the air, and 13 on the ground) and were lucky to only trail by seven at halftime. The Argos’ defense did play very well, but the Redbacks’ offense needs to do better. Good teams move the ball consistently to keep their offense on the field, the Redblacks couldn’t do that today.

In the second half, the Redblacks began to move the ball more efficiently, which allowed them to string first downs together, keep drives alive and get back in the game.

Near the end of the third quarter, the Argonauts went on another long six-play, 85-yard drive downfield to extend their lead to 24-9. Kurleigh Gittens Jr. who finished the game with eight catches and 161 yards would cap off the drive with his third TD of the year on a 12-yard TD reception from Bethel-Thompson.

The Argos’ offense kept the Redblacks’ defense on their toes by using a nice mix of the run and pass and Bethel-Thompson was careful with the ball and took what the defense gave him to keep the sticks moving. Bethel-Thompson, who leads the league in pass yards with 3,247 was slicing up the Redblacks’ secondary, he completed 27/39 passes for 365 yards, a TD, and an INT.

The Redblacks’ didn’t give up and fought back in the fourth quarter. Nick Arbuckle finished the game completing 26/40 passes for 290 yards and an INT, most of that came in the second half.

Early in the fourth quarter, the Redblacks were finally able to move the ball well and used Devonte Williams (who finished the day with 80 yards on 14 carries) in the run game to open up holes in the Argos’ defense for receivers like Nate Behar (six rec, 76 yds), Darvin Adams (three rec, 68 yds) and Jaelon Acklin (five rec, 62 yds) to make plays to extend drives.

Short yardage QB Caleb Evans tied Dominique Davis atop the CFL for most rush TDs this season with 10 by finding the endzone on a two-yard QB draw and the Redblacks would cut the Argos’ lead to 24-16.

After recording a stop on defense, Nick Arbuckle led his team on another long, meticulous drive to the Argos’ 25-yard line but would have to settle for a 31-yard field goal from Ward to make cut the Argos’ lead to five points. The Redblacks would have a few more chances with under five minutes left to take the lead but were ultimately stopped by the Argos’ defense.

The Redblacks made it entertaining at the end, Lorenzo Mauldin leads the league with 12 sacks after recording two against the Argos and is only one away from breaking Justin Capiciotti’s franchise sack record, and Jaelon Acklin eclipsed the 1,000 receiving yard mark this season and leads the league with 1,025 yards. These are all positives to take from this game, but if the Redblacks moved the ball as well in the first half as they did in the second and if the Redblacks’ secondary limited Gittens Jr. a bit more, the outcome could’ve been drastically different.

Despite the loss, the Redblacks finished the game almost statistically even with the Argonauts, thanks to a good second half. They had 391 total yards (290 passing yards, 101 rushing yards) compared to the Argos’ 408 total yards (365 passing yards, 43 rushing yards), both teams had 22 first downs, and possession was separated by only 72 seconds in favour of the Argos.

The Redblacks fall to 3-9, two games back of the 2nd place, 5-9 Alouettes while the Argos won their third straight game to improve to 7-5. They’ll meet again in Ottawa on September 24. All their remaining games including the Argos rematch are virtual “must-wins” if the Redblacks want to make the playoffs.

One thought on “Redblacks rally late vs Argonauts, ultimately fall short in a game with huge playoff implications”