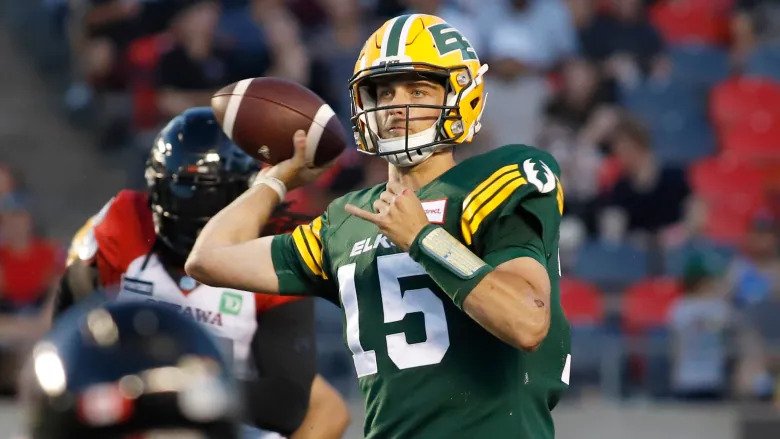 In a must-win game for the 1-7 Redblacks to keep their slim playoff hopes alive and a game which was potentially the last chance for both quarterback Caleb Evans and head coach Paul LaPolice to keep their jobs, the Redblacks got humiliated at home, losing 30-12 to the 2-7 Edmonton Elks, who were the worst statistical team in the CFL on both sides of the ball before the game.

The Redblacks have now lost 8 consecutive home games and are 1-19 in their last 20 home games since the 2019 season. The Redblacks did some good things in the first half, despite leaving multiple points on the board, but were utterly embarrassed in the second half, getting outscored 21-0.

It’s hard to believe considering the game’s outcome, but the Redblacks actually moved the ball well in the first half and used a mix of the run and the passing game to find holes in the Elks’ defense to efficiently string first downs together.

Midway through the first quarter, Lewis Ward drilled a 46-yard field goal down the middle to give the Redblacks a 3-0 lead. However, a roughing-the-kicker penalty against the Elks gave the Redblacks a first down at the Elks’ 29-yard line. Two plays later, Caleb Evans scrambled out of the pocket and took it to the house himself from 21 yards out on a quarterback draw, breaking several tackles and juking out a handful of defenders on his way to the endzone. Kicker Lewis Ward hit the convert and the Redblacks took a 7-0 lead with 6:06 left in the opening quarter.

After a 52-yard field goal by the Elks to cut the lead to 7-3, the Redblacks’ offense continued to operate efficiently. Caleb Evans made some questionable reads but used his legs and arms to extend drives. However, two missed field goals from Ward in the second quarter, from 40 and 47 yards out, resulted in two points instead of six. The Redblacks left four points on the board but still had a 9-3 lead.

On the Redblacks’ next drive, a nice punt return from Terry Williams, who has been fantastic on special teams all season, and a 50-yard pass from Evans to Darvin Adams set up the Redblacks in the red zone. They couldn’t convert on first or second down and settled for a 13-yard field goal from the Elks’ six-yard line, which Ward hit it to extend his team’s lead to 12-3. That was another instance where LaPolice’s conservative play calling cost them – by taking that field goal, the Redblacks left another four points on the board.

They should have gone for it on third and goal, if they converted, they would’ve taken a 16-3 lead, if not, they would’ve had a struggling Elks’ offense who could barely move the ball, backed up at their own six-yard line.

The Redblacks were outgaining the Elks both on the ground and through the air and had a 12-9 lead at halftime, their first halftime lead all year. The Elks’ offense was struggling and QB Taylor Cornelius had only completed three passes at the half. The Redblacks’ defense was playing very well, recording a ton of pressure and disrupting his reads, making him feel uncomfortable, despite Lorenzo Mauldin recording their only sack.

In the second half, the Elks’ offense woke up and the Redblacks’ defense had no answers. Their run game opened things up and Cornelius became a lot more comfortable. He made many accurate throws and very often stepped up in the pocket to avoid pressure and find open receivers in the middle of the field, which gave the Elks first downs and kept their offense on the field for so long while Evans and company sat on the bench.

After struggling mightily in the first half, only completing 3/11 passes for only 45 yards, Cornelius’ stellar second half was ultimately enough to give the Elks a much-needed victory to stay alive in the West Division playoff race. He finished the game completing 16/27 passes for 208 yards and two TDs and picked up 47 yards on the ground.

Not only was there no creativity in the offensive play-calling – which proves LaPolice should hand the play-calling duties to someone else and simply focus on head coaching – but LaPolice also waited too long (until the Elks took a 30-12 lead) to put Nick Arbuckle in at quarterback. By that time, the game was already lost. As a result of LaPolice’s dull offensive play-calling, his bad game management, and the fact that he now has a 4-19 record (1-8 in 2022) as the Redblacks’ head coach, he has to be fired.

Their playoff hopes are officially gone with tonight’s loss to the Elks, so bring in another experienced coach who has the rest of this season to come up with new offensive schemes and play calls that work so that he’s ready to go next season when the games matter again and when Jeremiah Masoli is healthy.

In addition, Caleb Evans should no longer be the starting QB for the Redblacks. He led both teams in rush yards with 82, got the Redblacks on the board with his phenomenal TD run, and threw no interceptions, but was inaccurate on many of his throws, made several bad reads that almost caused turnovers, and was unable to find the endzone with his arm, which is disappointing considering all the talent in the receiver room.

Evans finished the game completing 10/16 passes for 111 yards. Nick Arbuckle, who played for just over six minutes and only had 15 offensive plays completed 7/13 passes for 85 yards, 0 TDs, and 0 INTs. Granted, he played in garbage time, where the Elks were playing mostly prevent defense, but Evans has not shown enough to start, Arbuckle has shown enough to be given a chance to start.

These two teams will meet again next week. The 1-8 Redblacks, hopefully with Arbuckle starting and LaPolice fired, look to rebound from an embarrassing home performance. The 3-7 Elks look to sweep the Redblacks to keep pace with the 5-5 Saskatchewan Roughriders in the West Divison playoff race.

This was the most winnable game on the Redblacks’ schedule and doing so would’ve given the Redblacks momentum and put them right back in the playoff race. They didn’t just lose, they were humiliated by the worst statistical team on both offense and defense in the CFL. Their season is now officially over. Ottawa football fans deserve better.

One thought on “Redblacks’ offense struggles, lose in humiliating fashion to Elks at home”