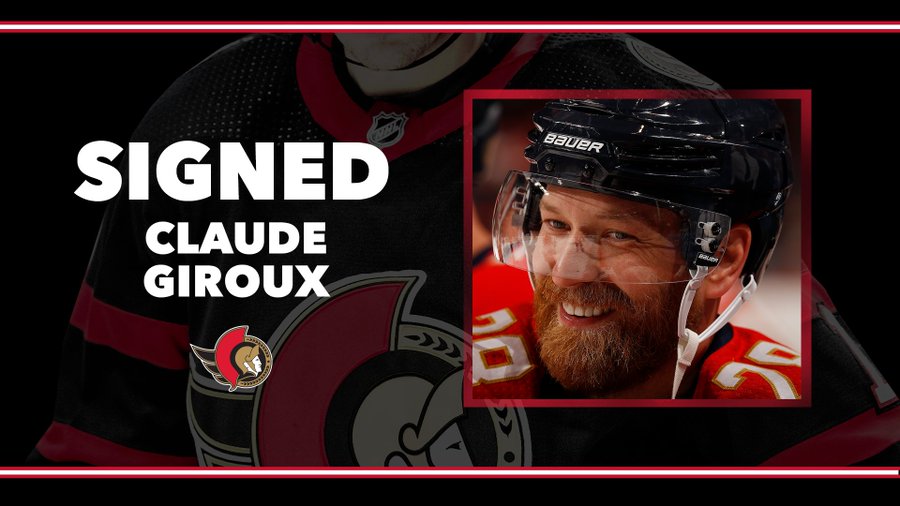 The Ottawa Senators made a huge splash just minutes after the official opening of free agency. They signed veteran forward Claude Giroux, one of the biggest names in this year’s free agent class, to a three-year deal, with an average annual value of $6.5 million.

Giroux, 34, was born in Hearst, Ontario, and has strong ties to the Ottawa region, spending his offseasons in Ottawa. He went to Beatrice-Desloges high school in Orleans and played Junior A hockey for the Cumberland Grads and Major Junior hockey for the Gatineau Olympiques from 2004-2008.

As a first-round draft pick in 2006 by the Philadelphia Flyers, he has been a top target for the Senators since the start of the offseason after he recorded 21 goals and 44 assists in 75 games in the 2021-22 season for both the Flyers and the Florida Panthers.

He now joins a young club, with a lot of depth and talent, emerging from an extensive rebuild and looking poised to end what has been a five-year playoff drought. The Senators have been one of the busiest teams in the offseason thus far, trading for Alex DeBrincat from the Chicago Blackhawks, acquiring veteran goaltender Cam Talbot in a trade with the Minnesota Wild, and sending Matt Murray to the Toronto Maple Leafs to clear up cap space. Unfortunately, forward Colin White was placed on waivers to also clear up cap space to afford DeBrincat and Giroux.

Clearly, Giroux liked the moves the Senators have made so far this offseason and he believes they’re in the position to not only contend for a playoff spot but also contend for the Stanley Cup.

“I wouldn’t sign here if I didn’t think we had a chance to win the Cup,” Giroux said in an interview with TSN’s James Duthie shortly after the news broke. “For me coming here, I’m just excited to play with young talent that likes to compete. I’m not saying we’re going to win the Cup this year, but the plan is to build on it and have baby steps to that.”

“When the idea was to come back home and play for the [Senators], I didn’t look back after that,” Giroux said to TSN. “It’s a young group that’s very exciting. A lot of talent, guys that like to work hard and compete. I like the character of the team and I think I’m going to fit right in with them.”

Giroux spent the first 15 seasons of his career in Philadelphia, where he experienced immense success and also served as the captain for 10 seasons. Giroux played exactly 1,000 career games for the Flyers where he recorded 900 points (291 goals and 609 assists). He led the Flyers in scoring on eight separate occasions. Shortly after his 1,000th game, he was traded to the Panthers at the trade deadline and his incredibly efficient offensive production continued with his new team as he registered 23 points (three goals and 20 assists) in 18 regular season games. He has also amassed 81 playoff points in 95 playoff games, including eight points in 10 contests this postseason with the Panthers.

Giroux is an extremely talented playmaker, with a high hockey IQ. He knows where all his teammates are on the ice, and has the ability to make a pass to anyone from anywhere on the ice. He is a great skater, has fantastic stickhandling, and his short and long-range passing is tremendously accurate, powerful, and elite. He has an accurate and hard wrist shot, with a quick release that can fool opposing goalies. He is extremely helpful on special teams and carries his own weight defensively with his speed and physicality. He is versatile and despite being listed as a left-wing by Hockey Reference, he has extensive experience playing in the center position and is reliable in the faceoff circle, something the Senators need more of.

This is another fantastic move by Senators’ General Manager Pierre Dorion, who has had arguably the best offseason of his career, and free agency is only just getting started. Giroux is one of the best two-way players on the free agent market, is a leader and a mentor for younger players, and getting him for only $6.5 million per year is a steal. This signing definitely gets an A grade, at the very least.

“We’re thrilled to add a player of Claude’s caliber to our lineup,” Senators general manager Pierre Dorion said in a news release. “He’s an elite offensive talent with exceptional face-off prowess and a player who maintains a strong work ethic. His leadership skills are arguably among his best assets. We’re very happy to welcome Claude and his family home to Ottawa.”

Giroux provides a huge boost on the offensive side of the puck with his playmaking ability, his leadership, his dominance in the faceoff circle, and his leadership skills. He will be a mentor to a young core of players who want to win. He also provides a spark on defense with his speed, physicality, and his ability to create turnovers in the neutral zone and turn them into counterattacks. He will provide a boost to a powerplay and penalty kill unit, which both finished in the bottom half of the league last season.

Giroux will likely line up on the left side of the first line, with Stutzle playing at center and DeBrincat – a two-time 40-goal scorer at only 24 years old – on the right wing. Brady Tkachuk, Josh Norris, and Drake Batherson will form the second line. That is a deadly top-six forward core if it can stay healthy all season long. With guys like Alex Formenton, Mathieu Joseph, Connor Brown, and Shane Pinto, their bottom six forwards will be very good too.

In addition, after moving on from Matt Murray and Filip Gustavsson, who they sent to the Wild for Cam Talbot, their goaltending duo will consist of Cam Talbot and Anton Forsberg. Talbot has a ton of experience in the regular season and postseason. He led the Wild to the playoffs for the two seasons he played with them while posting a save percentage of .910% or better and a goals-against-average of 2.76 or better in each of his two seasons in Minnesota. He has a career save percentage of .915% and a career goals-against-average of 2.63, both tremendous numbers. Anton Forsberg has been developing nicely and had a breakout season this year, with a 22-17-4 record, posting a .917 save percentage and 2.82 goals against average. Mads Sogard has been developing nicely in the minors for the future.

The Senators are definitely trying to compete for a playoff spot now with all the signings they’ve made this offseason, most notably DeBrincat, Talbot, and now Giroux. If the Senators bring in another top-tier defenseman to help out the talented defensive players they already have like Thomas Chabot, Artem Zub, Travis Hamonic, and Erik Brannstrom, they will truly be able to compete for a playoff spot and potentially a Stanley Cup in the near future.

I am genuinely excited about what Dorion will do the rest of this offseason and for the start of next season. I believe the Senators will finish top four in the Atlantic and will get into the playoffs for the first time since they were one goal away from the Stanley Cup Final in 2017.