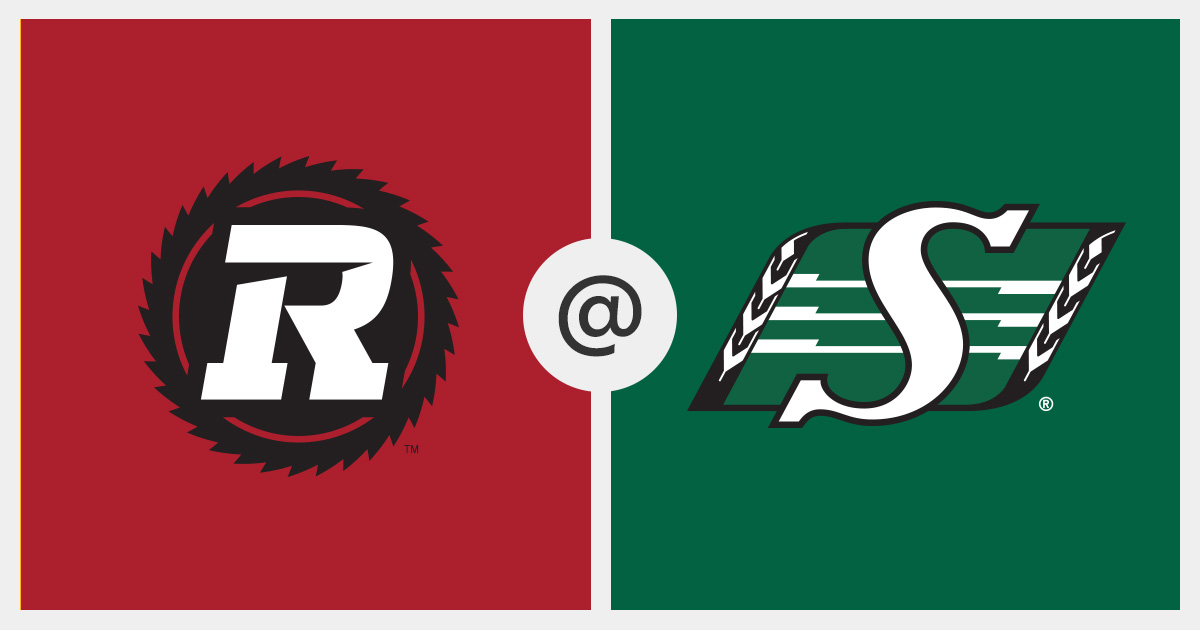 The Ottawa Redblacks’ defense could not handle the Saskatchewan Roughriders’ formidable backfield duo of Frankie Hickson and Jamal Morrow, who combined for 170 yards and a touchdown on the ground and the Roughriders cruised to a 28-13 victory to improve to 4-1 on the year. Meanwhile, the Redblacks fell to 0-4 on the season, three of those losses were by a combined 13 points.

To make matters worse, the Redblacks will be without their starting QB Jeremiah Masoli for at least 10-12 weeks after he took a very late and dirty hit to the knees by Garrett Marino, who had a clear intent to injure. Masoli will not need reconstructive surgery on his ACL, however, he will undergo a bone-based surgical procedure on his leg.

Garrett Marino has still not been suspended or fined by the CFL for his dirty, low hit on Masoli long after he threw the ball, which is sickening considering at that point in the game, the Roughriders were up 15 with five minutes left.

The Redblacks started very well on defense, registering a sack on their opening defensive possessions to force a three and out.

After a failed attempt to convert a third down and one from their own 37-yard line on their opening offensive possession, a risky move by head coach Paul LaPolice so early into the game, the Redblacks’ defense stood strong and a sack by Lorenzo Mauldin ensured Ottawa’s turnover would at most give the Roughriders a field goal attempt. Brett Lauther nailed it from 50 yards out and the Riders took an early 3-0 lead.

The Redblacks responded nicely with their own meticulous drive down the field led by Jeremiah Masoli’s accurate throws all over the field and his shifty movement to get outside of the pocket to give his receivers time to get open downfield.

The Redblacks advanced into the red zone but were unable to punch it into the endzone from the Roughriders’ 13-yard line. This is a problem they’ve been facing all season, Masoli has only thrown for two passing TDs all year, including one to Nate Behar against the Roughriders.

Lewis Ward, the most reliable kicker in the league, made easy work of the 20-yard field goal and the Redblacks tied the game 3-3 with 4:31 left in the first quarter.

On the Roughriders’ next drive, the Redblacks appeared to get a crucial stop on second down at midfield to force a punt and give their offense another chance to put a scoring drive together. However, a questionable defensive pass interference call against the Redblacks which gave the Roughriders a first down.

There was no early contact, pulling, holding, or anything to warrant a flag, but the Roughriders

took advantage of the penalty and advanced the ball to the brink of the red zone after a third down and one conversion from running back Jamal Morrow. The score was 3-3 after the first quarter. In the second quarter, the Redblacks’ defense bent but didn’t break in the red zone. Great coverage by the Redblacks’ secondary led to Mauldin getting his second sack of the night – the Redblacks’ third sack – to force another field goal attempt from the Roughriders. Lauther hit the 28-yard attempt with ease to give his team a 6-3 lead.

The Roughriders had the most sacks so far this season, registering 21 in four games. Nearly halfway into the second quarter, the Redblacks’ offensive line still hadn’t given up a sack, which says a lot about the talent they have on their offensive line and the great job management did in the offseason to build a stable offensive line with a lot of veteran talent.

After a two and out from the Redblacks’ offense, the Roughriders’ next offensive drive consisted of several big chunk plays. After starting on their nine-yard line, Roughriders’ QB Cody Fajardo would orchestrate an efficient and meticulous six-play, 101-yard touchdown drive capped off by a 19-yard reception by Duke Williams. The drive also included a 28-yard pass from D’haquille Williams, a 33-yard screen pass from Morrow, and a few big runs from Morrow and Hickson. The Riders took a 13-3 lead with eight minutes left in the first half.

On the Redblacks’ next drive, Terry Williams – who has been electric in the punt and kick return game all season long thus far – had a huge return to the Redblacks’ own 54-yard line. Masoli and company had great starting field position and were in a position to respond to the Williams’ TD. The Redblacks took a 10-yard sack from A.C. Leonard and couldn’t make up the yards on second down. Another booming punt from Richie Leone pinned the Riders inside their own five-yard line.

The Redblacks’ defense was able to prevent a long TD drive from the Riders by forcing a three and out. On their ensuing offensive possession, they started on their opposition’s 40-yard line, their best starting position all night. Even in prime scoring position, the Redblacks could not generate a first down and were forced to settle for three points. Lewis Ward hit the 42-yard field goal to cut the Roughriders’ lead to 13-6 with 2:40 left in the second quarter.

On the Roughriders’ next drive, a harmless handoff on a second and three at their own 47-yard line turned into a 63-yard TD run from Hickson, who broke a few tackles and used his incredible speed to separate from every Redblacks’ defender. The Riders took a 19-6 lead with two minutes left in the first half after missing the point after.

After another big defensive stop, the Riders would add to their 16 second-quarter points with another field goal. A 40-yard defensive pass interference penalty on a severely underthrown ball from Fajardo and a fantastic play from receiver Kian Schaffer Baker juked a few defenders to stay in bounds before rumbling down inside the red zone after a spectacular catch on the sideline would set up a 17-yard field goal from Lauther after the Redblacks made a defensive stand inside their own 10-yard line.

Masoli finished the half completing only 9 of his 15 passes for 63 yards, the worst he and the entire offense has been in a game so far this season. Also, after a good few opening drives from the Redblacks’ defense, recording three sacks and forcing two and outs, they surrendered 19 points in the second quarter and 22 first-half points, the most they’ve given up in a first half all season.

The Redblacks could not stop the run, which helped the Riders extend drives and opened up the intermediate and long passing game for Fajardo. The Redblacks could also not stop the Riders’ running backs from catching passes out of the backfield and turning them into big plays. It didn’t help that the Redblacks were missing two key defensive players: Patrick Levels and Frankie Griffin, both of whom can stop the run. In their places were youngsters Adam Auclair and Deshawn Stevens and the Riders took advantage of the inexperience.

The Redblacks’ defense would start the second half strong getting a stop and forcing a punt. On their ensuing drive, they finally got some momentum in their favour with a time-consuming, but well-executed drive down the field. Masoli used William Powell in the running game to open things up downfield for his receivers: Shaq Johnson, Jaelon Acklin, and Terry Williams.

The Redblacks converted numerous second and long situations through the air, thanks to accurate passes from Jeremiah Masoli to keep their drive alive. His 22-yard touchdown pass to Nate Behar on a 2nd and 12, where he rolled right before firing a dime into Behar’s bread basket was no exception. Ward hit the PAT, and the Redblacks cut the Riders’ lead to 22-13 with a huge TD midway through the third quarter.

However, the Redblacks’ defense wasn’t able to respond by getting a stop and the Riders’ high-powered offense struck again. The Riders orchestrated a long drive, which saw Fajardo operating efficiently and being tremendously calm under pressure, Hickson making several contributions on the ground, Morrow making numerous contributions through the air and on the ground and D’haquille Williams making multiple nice catches before Schaffer Baker made a nice move after the catch to waltz into the endzone to extend his team’s lead to 28-13 after they missed the two-point convert. Up 15 points with four minutes left in the third quarter, the Riders were in full control.

In an attempt to get back into the game, Masoli launched a deep pass on the Redblacks’ next offensive drive which got picked off by linebacker Larry Dean.

The fourth quarter was a scoreless affair, with both defenses playing extremely well. The Redblacks’ defense did a great job preventing the Riders from scoring any more points, but their offense could not move the ball downfield efficiently enough to get into scoring position either, they kept falling behind on down and distance with incompletions and sacks (the Redblacks gave up two) and were frequently forced to punt. The Riders’ defense began to apply a lot more pressure to Masoli and their secondary played great, which contributed to the Redblacks’ offense struggling.

With under five minutes left to play, the Redblacks strung together a few nice plays and moved the ball to around the Riders’ 40-yard line. Then Masoli took a brutal, late hit from Marino. Masoli was in a ton of pain and had to be carted off. Marino was ejected but was celebrating in front of the crowd on his way to the locker room. Marino’s roughing the passer and unnecessary roughness penalty gave the Redblacks 25 additional yards to set up a first and 10 from the Riders’ 15-yard line.

If the Redblacks wanted any chance of coming back, they needed to score a touchdown on this drive with Caleb Evans at quarterback. After two incomplete passes to the endzone, the Redblacks went for it on third down, and Evans was sacked after scrambling around looking for someone to throw to for a solid 10 seconds. The Redblacks’ third turnover of the game sealed the victory for the Riders.

Things look bleak for the Redblacks, sitting third place in the East Division with an 0-4 record and their star QB being out for at least 10-12 weeks with an injury. However, the season isn’t over yet. The entire East Division has struggled this year, which still gives the Redblacks a shot at the playoffs as long as they can win games against their East rivals. Also, the Redblacks still have a good team on offense and defense, even with Evans at QB. They aren’t as good as they are with Masoli, but it’s a ‘next man up’ mentality in the CFL, so they have to be ready. Paul LaPolice might not be the answer in Ottawa, however, but we’ll give him a few more weeks.

I am going into my fourth year of Journalism at Carleton University. I love to watch and write about all sports and have played many sports like swimming and soccer since I was very little. I hope to continue developing my writing, reporting, and editing skills in hopes of becoming a professional sports reporter one day.