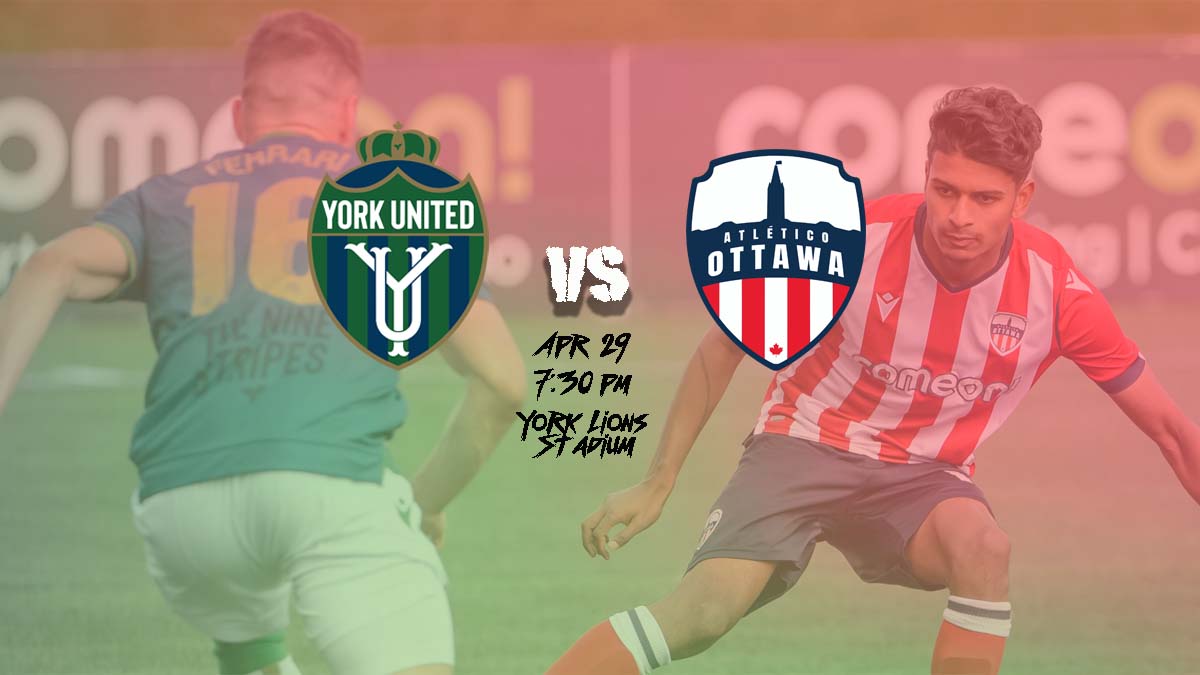 After getting thrashed 6-1 at home by the hands of Valour FC, Ottawa will look to unite together and go into York and snatch 3 points away from the 9 stripes (Why are they called this, they don’t even have stripes on their home kit). Let’s get into the Headlines to watch for Tomorrow:

Chance to right the ship

Despite getting embarrassed at home, Ottawa still sits in 2nd place with 6 points. Pacific, who drew 0-0 with Edmonton on Wednesday, are first with 10 points. Pacific also play on Sunday, meaning that Atlético Ottawa will have a game in hand over Pacific after this weekend. Basically, this means that if Ottawa wins on Friday, they are right back within touching distance of Pacific, and guess who Ottawa plays on May 7th? That’s right, Pacific. Ignoring Pacific, an Ottawa win will also create more separation between themselves and the teams behind them in the standings.

Ignoring the Standings, this game provides the perfect opportunity for Ottawa to show the league that the 6-1 thrashing was a fluke and this Ottawa team is as Massive as the fans say they are. Speaking about fans…

Life is a highway

Ottawa will be heading on the road for the first time this season, and there’s a lot to improve on. Last season Ottawa’s road record was 1-3-6… absolutely brutal. Still, this season Ottawa is a different team from Staff to players, and Ottawa will be looking to match that one away victory right off the bat. Of course, they will have to do this without the Dub’s support at TD Place, and Nate Ingham acknowledges this.

“The support we’ve received so far has been unbelievable and I honestly believe they’re the best fans in the league. To see them sing all the way until the last minute last weekend, we can’t thank them enough. We’ll miss them on the road but this is a game for them. We’re going to do everything we can to get back on track and bring them back the three points.”

After this offseason, it is fair to say that ATO and York fans do not get along together. Whether this translates to on the field is a different story, but to the fans, this is a massive game early on in the season. Ottawa holds a 0-5-1 record vs York, meaning that York has that one-game advantage over the Roujiblancos. These two teams have faced each other 7 times in 2 years, and this season another 5 games will be played between these two, including a Canadian Championship game. With the close-ish proximity of the two teams, the CPL might not even have to force a rivalry between these two clubs.

Will the bubble finally burst?

Despite earning a very respectable 6 points from a possible 9, Ottawa has only scored 3 goals this season. While it is too early to be ringing alarm bells, fans around the league will be looking to see if Ottawa can finally start putting multiple balls in the net against a York side who, despite having only 2 goals against, have shown signs of some defensive weakness this season. When asked if the team has focused on scoring this week, CarGo had this to say:

Head Coach CarGo is keeping his lineups close to his chest ahead of tomorrow’s tilt.

“Everyone in the squad who is on the 18 player list is prepared to play and prepared to give a good performance”.

CarGo did go on to add that he didn’t think the last game’s result was due to the lineup changes.

Take what you want from this, but it wouldn’t be the wildest guess to assume we might still see a few lineup changes ahead of the York Match.

Tomorrow provides a perfect opportunity for Ottawa to bounce back from an embarrassing result and to prove to not only their fans but to the league that the first two victories is the real Ottawa side and not that 6-1 thrashing. If you’re reading this the day before the game, tune in to a live preview show at 7pm hosted on Twitter on the Capital City Supporter’s Group Twitter account.