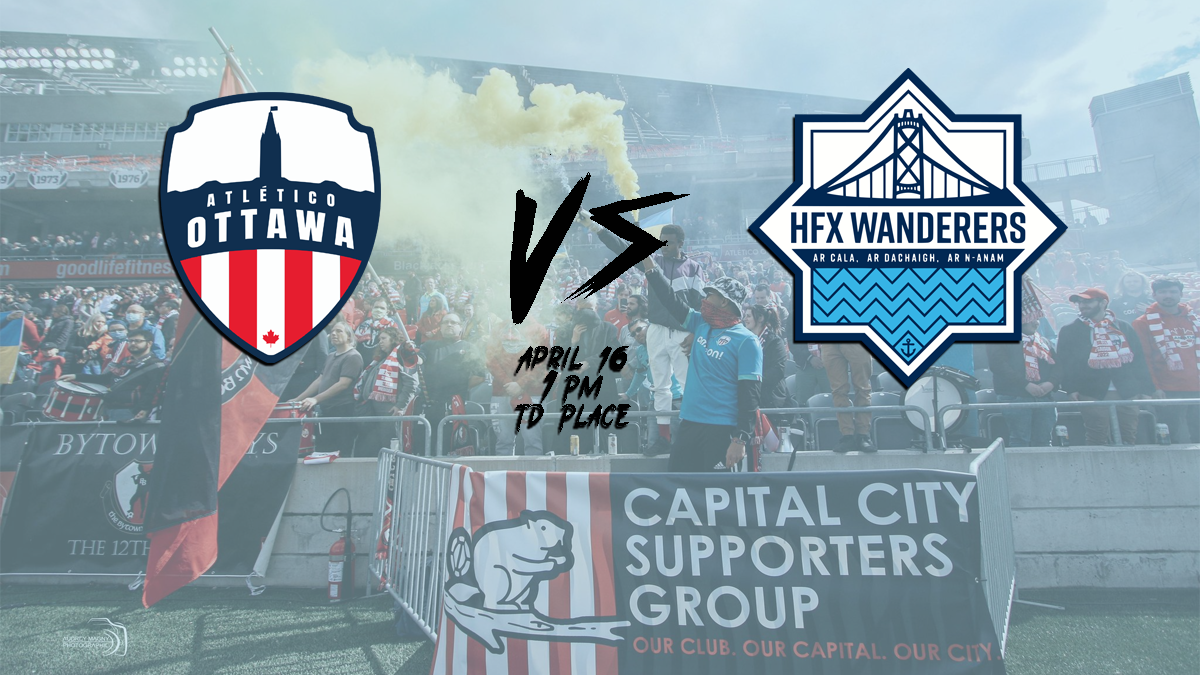 After earning 3 points in the first week of the season, Atlético Ottawa turns their focus to Halifax Wanderers. Ottawa had a 1-2-3 record against Halifax last season, winning 2-1 in their first-ever game at TD Place and losing 2-1 twice vs HFX. Due to the number of games played against each other last season, both fanbases are very familiar with each other. While I wouldn’t call it a rivalry, I can guarantee that nothing would make the other fanbase happier than defeating their familiar foe. Here are some headlines to watch for tomorrow:

Twice Upon a Time

Fans are encouraged to don their pyjamas and bring along gently used kid’s books to be donated to ‘Twice Upon a Time.’ More information can be found Here.

Both Atlético Ottawa and Halifax are coming off 1-0 wins to start the season. Both teams scored their goals off penalties, with Brian Wright scoring for Ottawa and João Morelli scoring for Halifax. Ottawa played a much more defensive game vs Cavalry, denying any dangerous opportunities and showing massive improvement from last season.

We have many points to be proud of [from the opening game]. They were a tough opponent but we had great support from the local fans and the atmosphere they created. We showed we are going to be a competitive team however, we showed some nerves, and I’m looking forward to improving them. If you can do that through a win, then it’s even better.

On the other hand, Halifax dominated their game up to the 60th minute before falling into a defensive shell. While they kept the clean sheet, York looked dangerous on the attack and had a few glorious chances that should have been put away. Regardless, 3 points is 3 points, and Halifax will be looking to bring this momentum into TD Place.

João Morelli was a thorn in Atlético Ottawa’s side for all of last season. In 6 games, Morelli bagged 8 goals against Ottawa. He’s a massive threat for Halifax; however, the problem for Halifax is that he’s their only threat. Halifax lacks in attacking threats other than Morelli, and if teams are able to shut the 2021 Golden Boot winner down, Halifax usually struggles to score. Halifax did bring in some threats this offseason, but I believe that if Atlético Ottawa can shut down Penelli, they will be able to bring home the three points. Carlos González notes that Morelli is a threat but does not want to look past the other attacking threats:

Morelli is of course a great player but I think they have good offensive players. So we cannot only focus on one player because we will make mistakes with other players so we need to take control of the game and try to play the game we want so that the HFX strikers are not comfortable at any moment.

Following his red card against Cavalry for a “stomp,” Atlético Ottawa captain Drew Beckie has been suspended for 3 games (10% of the season). This outrageous decision by Canada Soccer has left many footy fans around the country scratching their heads, but the head coach of Ottawa is focused on the game ahead.

What can we do, we have to think forward. The only thing I can change is who is going to play in his place. I cannot change anything else and that is the only thought I have about the situation at the moment.

As for who will get the armband tomorrow, CarGo, with a grin on his face, said:

Malcolm Shaw and Brian Wright have scored a combined 5 goals against Halifax. These two will be itching to continue their goal-scoring record against the Wanderers, and this time a new addition might be looking to open his account against Halifax. Vladamir Moragrega only had 11 minutes of playing time against Cavalry but played a part in the leadup of play that led to the penalty for Ottawa. He is an exciting player to watch and could do some damage tomorrow.

Tomorrow should be a fantastic game. Despite not being called a rivalry, Atlético Ottawa and HFX have some history, and we should expect a heated match. As for a prediction, this tie seems to be obsessed with 2-1 results, so I am predicting a 2-1 victory for the most Massive team in the league: Atlético Ottawa.