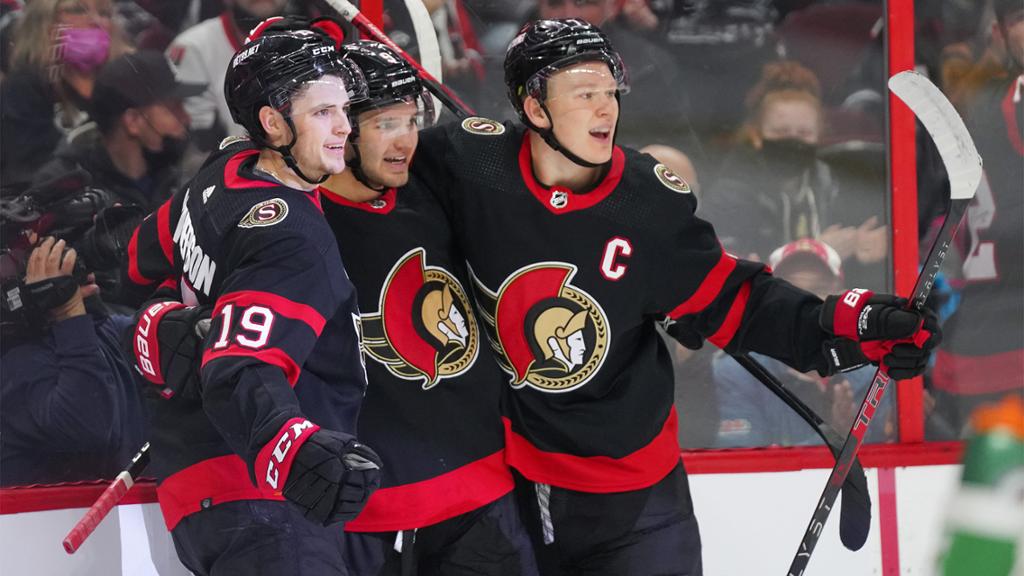 The Senators started the season slow with a record of 4-15-1 start in their first 20 games. They scored only 2.4 goals per game in that span, their first line was producing almost 50 percent of their points, and they weren’t getting enough production from their other lines. They allowed 3.95 goals per game; when Thomas Chabot’s line was not on the ice, the defence couldn’t stop anything or get the puck out of their zone. Their powerplay operated at a 17.7 percent rate, near the middle of the league, and their penalty kill was effective 73.4 percent of the time, in the bottom 10 in the league.

The Senators have been improving ever since. Like last season, after starting slow, they are beginning to heat up and look like a playoff contender that we all expected them to be. They have gone 15-11-4 in their last 30 games and have improved in every game metric. Their offence has gotten production from everyone, their defence has gotten drastically better, and their goaltending has stabilized, keeping the team in games.

They still aren’t playoff contenders, at least this season, but they’re improving. They sit at 19-26-5 for 43 points, good enough for sixth place in the Atlantic Division. In their last 30 games, they’ve scored 2.86 goals per game, allowed only 2.66 goals per game, have a penalty kill that killed off 86.4 percent of opposition powerplays, but their powerplay has fallen to a 15.6 percent effectiveness.

The Sens were 4-14-1 entering December. The Sens played well in their limited games in December as a result of the extended league-wide shutdown before and after Christmas as a result of COVID-19. They finished 5-3-1 in December to improve to 9-17-2, their first month with a winning record in the 2021-22 season. Their offence showed significant improvements, scoring more frequently in even strength and special team situations than the first two months of the season. They are also getting more production from all four offensive trios and their defensemen than the first two months of the season when it was mostly the first line producing.

In January, the Sens’ good play continued. They didn’t play a lot in the first half of the month due to continued COVID-19 outbreaks, but they recorded another month with a winning record. They finished the month with a record of 5-4-2 to improve their overall record to 14-21-4. In January, the goaltending improved, with Matt Murray regaining form thanks to consistent elite play from Filip Gustavsson and Anton Forsberg.

The defence saw significant improvements too. In January and February, they spent significantly less time in their defensive zone each game compared to the first two months of the season. They got better play from all four defensive pairings, which helped out Thomas Chabot, who played more minutes per game than any other player in the NHL and still plays a lot of minutes each game. They are a more physical team now, can limit opponents’ shots on goal and scoring chances much better than they did in the first few months of the season. Finally, both their powerplay and penalty kill have made slight improvements. They’ve drastically reduced the total amounts of shots against per game and goals against per game.

February has been less kind to the Sens with serious injuries to several key players like Thomas Chabot, Josh Norris, Drake Batherson, and Alex Formenton. The injuries cost the team some wins; however, not all the injuries were very long-term. In February, the team played pretty well, winning impressive games against good opponents and keeping games competitive in their losses. As of February 23, after the Wild game, the Sens have a record of 19-26-5 after going 5-5-1 in February.

The Senators have many young players on both offence and defence with a lot of talent in the minors and or who have played well in their limited time in the NHL with this season.

Their defence is anchored by Thomas Chabot, Artom Zub, and Nikita Zaitsev, who have all been excellent for the most part this season. Nick Holden, Josh Brown, and Victor Mete have also improved significantly this season. Brown, Mete, and Holden’s improvement helped the entire defence improve. Chabot, Zub, and Zaitsev have always been reliable and consistent defenders. Chabot is not only a perennial defender; he is also very creative in the offensive zone and a natural playmaker with 22 assists and 27 points, a massive boost for this young offence.

Lassi Thompson and Jacob Bernard-Docker both possess the skills to be talented defensemen in the NHL and have played well in their limited time with the team this season. The Senators are still awaiting the NHL debut of defensemen Jake Sanderson and Tyler Kleven, who will join the Senators after their collegiate season with North Dakota ends.

The Senators are now getting consistent production from all their lines on offence. They are getting scoring from the veterans on the team and the young, talented prospects.

Brady Tkachuk, Josh Norris, and Drake Batherson have been fantastic all season for the Sens as the first-line offensive trio. This season, they have combined for a whopping 97 points (48 goals, 49 assists). However, Batherson is out long-term after taking a dirty hit from Buffalo Sabres’ goalie Aaron Dell.

Many other players have answered the bell offensively for the Senators this season. Tim Stutzle has emerged as one of the best players in the 2020 draft, scoring 12 goals and 27 points; Connor Brown has been a playmaking machine with 20 assists and seven goals; Alex Formenton has 11 goals and 11 assists thanks to his speed and offensive creativity; and Nick Paul, Tyler Ennis, Adam Gaudette, and Zach Sanford have also all contributed as well.

With Norris and Batherson both currently on injured reserve, in addition to Colin White, who hasn’t played a game all season, guys like Stutzle and Gaudette have done well with increased responsibility logging first-line minutes, and Sanford, Paul, and Brown – typically all are bottom-six forwards – have all been excellent on the second line. Formenton, Tierney, and Ennis make a solid third-line trio with their ability to produce on both ends of the ice, and Parker Kelly, Austin Watson, and Mark Kastellic round out the bottom six forwards with their gritty play.

Colin White is expected to debut on February 26 against the Habs.

The Senators also have a ton of offensive prospects to add to their already incredibly young and talented core. Shane Pinto looked pretty good in five games with the Senators this season. He didn’t record the numbers we all thought he would, but he has the skills to succeed in the NHL; he just needs more time. He will be better next season when he gets off injured reserve.

Finally, none of the improvements on offence or defence would matter if it weren’t for the improving goaltending. After struggling last season and to start this season, Matt Murray was waived and sent to the minors. Ever since he was recalled from the minors, he has been playing lights out. Murray started the year 0-5-1 and then went on a 5-4-1 run, which is a massive turnaround and boosts his confidence. Anton Forsberg and Filip Gustavsson have also been very reliable all season long and proved their ability to stand on their head to keep their team in the game and help win games on any given night.

The Senators may not be a playoff team this season. General Manager Pierre Dorion hopes this will be the team’s last trade deadline as a seller, thus marking the end of their long rebuild. Once Batherson and Norris return from injury and go back to the first line, how does it affect guys like Brown, Formenton, Paul, Stutzle, among others? How will all the prospects fit into the lineup, and what guys will they have to move on from to bring those prospects in?

For example, do the Sens resign Nick Paul, or do they capitalize on his career-high production – nine goals, seven assists, 16 points – to bring in another solid piece or more draft capital? Paul already matched his career-high in goals and will surely beat it with over two months left in the season, and he is on his way to surpassing his assist total too because of the increase in his play-time to make up for the team’s key injuries. Also, do they move on from one of their three goalies, and if so, which one?

The Sens will have a lot of decisions to make as the trade deadline approaches and this summer, but they have a lot of youth and veteran talent on both sides of the puck, great goaltending, and are decently coached. They may not make the playoffs this season, but the future looks very bright.