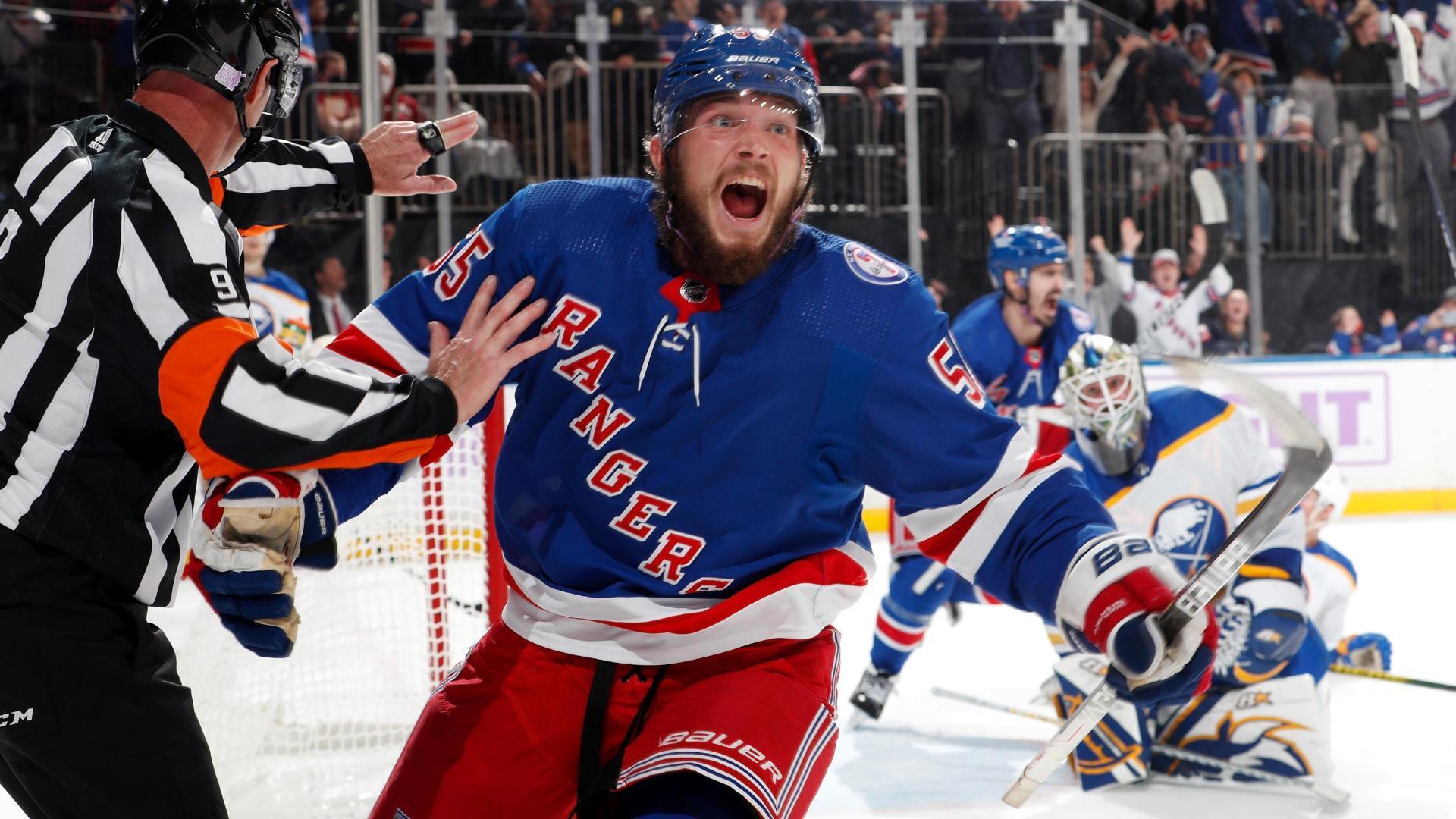 Ever wondered how “Money Ball” would look in the NHL?

Welcome to a 4 part mini series where I’ll be introducing one “high value” player from each team, today we’ll be focusing on the Metropolitan division. A “high value” player will be characterized by any player not playing on an entry level contract who’s playing above their contractual dollar value. I’ll try to pick the not so obvious players, like Nathan Mackinnon for example. Thanks to Dom Luszczyszyn at The Athletic for making this exercise very easy for us to evaluate.

The Rangers have built their squad in a multitude of ways. Attracting talent from free agency, having some luck in the draft and making some trades (for better or worse). As the leagues most financially beneficial team, it’s easy to attract some of the NHL’s best talent but their riches haven’t always been allocated in the wisest of ways. If we were doing an opposite article on some of the leagues most undervalued players in comparison to their contract, they’d have a strong contender in Jacob Trouba. Thankfully for the Rangers, at opposite ends of the spectrum they have players like Mika Zibanejad and Adam Fox, who’s on an entry level deal, to offset the money wasted. Zibanejad would be a prime example for the purpose of this article making a hair over $5 million/year and playing like a $10million dollar centre, however Zibanejad has already been paid, making $8.5million which kicks in next year. Reiterating my purpose for this project, it’s to find those hidden gem type players and the Rangers might just have one in Ryan Lindgren. The 23-year old stable minded defenseman is playing on a freshly inked 3year/$3million dollar contract and has been a minute muncher for the Rangers this season. Lindren has a projected worth of more than double his earnings and is set to earn the Rangers a savings of approximately $10.5million dollars if his projected value remains the same over the course of the deal. Again, he’s only 23 years old and can easily make that contract look even better.

The Islanders are a prime example of a team who’s paying more for their players than their projected worth. You can almost go right down their list of players and looking at the contracts that they’ve handed out, many are player friendly deals. It’s something that the veteran team will have to move away from if they hope to remain competitive in this tough division. Thankfully for the Islanders, they were able to lock up their top defenseman the very season before he really emerged as a top defenseman in Ryan Pulock. His current deal that carries him into next season is a 2-year bridge contract. Pulock is playing for $5million/year but in projected value, he’s closer to a $10million dollar player. The Islanders have saved themselves almost $9million in projected worth with Pulock this season and he recently re-signed an 8 year extension that carries an average annual value of $6.6million.

The Canes were playing with fire this summer. Wanting retribution on the Canadiens has costed them millions on an okay young, 3rd line centre in Kotkaniemi. Conversely, the Habs have actually helped them save a ton of money with a weak offer sheet on Sebastian Aho, a great example of a money saving deal for the Canes. I almost want to skip the blurb on this one as I’m feeling like I need another shower writing this. This player has done nothing from an off ice standpoint to deserve this kind of acknowledgement however he was the clear cut choice from the Canes and maybe the biggest single season savings in the league. It’s no surprise that Tony DeAngelo brings a lot to the table from an on ice standpoint. If the antics and off ice behavior improve, DeAngelo will be getting a very solid payday, in fact if you can take solace in anything it’s that DeAngelo robbed himself of millions in the prime of his career. With his contract expiration status as an RFA, the Canes will still have some leverage to negotiate another team friendly contract if they so choose. The Tony DeAngelo experiment has saved the team $8.3million dollars this season from a pure on ice perspective however, it may come back to bite them yet.

The Bluejackets are another team caught in the middle of a retool/rebuild, in fact I’m not entirely sure what the plan is in Columbus. They have their fair share of bad contracts and sit in the murky middle in terms of success this season. They do have a singular success in terms of valuable players, playing over their contractual worth in RW, Oliver Bjorkstrand. With a fresh, 5 year contract extension in hand, Bjorkstrand could save his team an awful lot of money if his projected play this season is indicative of the remaining years. The well rounded winger is middle of the pack defensively while being a top percentile forward offensively, making for a great package. The player could save his team $13million in projected worth if his play remains consistent during the 5 year duration of the contract. That could help open doors for the Bluejackets.

In players looking to enter elite territory, Jesper Bratt is not getting nearly enough praise for his rapidly improving play. Watch one Devils game and you’re eyes will be captivated by #63 as he blazes through the neutral zone with the puck on a string. Bratt, not only easy on the eyes, has signed a two year bridge deal which is set to expire. Breaking out in a contract year maybe isn’t ideal for the Devils but they should be able to lock up their newly minted star forward this summer as he’s still under team control as an RFA. If his market value is any indicator, Bratt is due for a hefty long term deal with the Devils. The most underrated winger has saved his team $6.2million dollars in projected value this year.

If we were doing a report on the polar opposite, the Flyers would have a plethora of overvalued players making too much money and not playing close to their pay. Kevin Hayes is a primary example of this, making over $7million for the next 4.5 years while playing to the value of a $1.9million dollar player, ouch! For the Flyers Sean Couturier was their saving grace. I say was because Coutourier was set to hit free agency but has opted to sign long term with the Flyers. Couturier’s current contract has saved the Flyers roughly $4million dollars in value this season, in which they’ve more than spent poorly on other players. Hopefully the re-signing of their star centre will bring more valuable assets to the middling Flyers as they hope to compete with their current core group.

The Penguins have remained competitive for years as the successful franchise has continuously found unique ways to surround their centerpiece, elite players, Crosby and Malkin. the Pens always seem to find players with value and have managed to get these players on team friendly deals. The selling feature of getting to play with Sid and potentially win a championship is always sought after. Honorable mentions in for the Pens include the most obvious choice and one of the NHL’s most underrated players, in Jake Guentzel and lost and found defenseman, Mike Matheson. Interestingly enough the Pens did the exact same thing years previous with defenseman Justin Shultz. For this exercise I’ve opted to look at money saving, dynamic, doo it all winger, Bryan Rust. It’s easy to say that Rust has simply found success by playing on Crosby’s wing. The underlying numbers suggest that there’s more to the story than that. The solid winger may have a slightly inflated projected value for the aforementioned point but according to the calculations below, he’s saving the Penguins nearly $7.5million dollars this year.

The Caps, like the Pens have done a decent job of remaining competitive for many years without breaking the bank. They haven’t had the same degree of success although they did have one of the most memorable championship seasons in recent memory, in 2018. They had some really good value players on that team, including NHL villain, Tom Wilson, who has since been paid well. This year’s money saver has actually come from their arch rivals, mentioned above in the Penguins and changed sides. Connor Sheary has been a quality middle six forward for the Caps this year. The best part for the Caps is that Sheary, who was seemingly at the brink of his NHL exit, has bounced back in a big way this year, provided depth scoring for the Caps and still has a year left at the generous $1.5million dollar cap hit. Sheary could save the Capitals $7million dollars in depth scoring if his projected value remains the same next season.