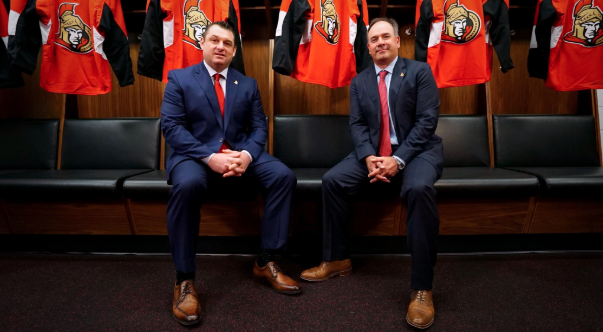 “The rebuild is done. Now we’re stepping into another zone,” Pierre Dorion said in early September.

19 games into the season, it appears that zone they’ve stepped into is irrelevance. The team currently sits last place overall in the NHL and has a 2.4% chance of making the playoffs. 2.4%. It’s barely December and the team’s season is essentially already over.

The team is supposed to be at the beginning of its 5-year run of unparalleled success and spending near the salary cap. Fans were promised a top 6 forward and top 4 defenseman this summer. They were promised the team would be ready to compete.

What have they been given? The team was under the salary cap floor a week before the season started. The top 6 forward fans were promised? Zach Sanford. That top 4 defenseman? Michael Del Zotto and a 2-year, $2 million contract to go with him. The team has been a failure this season.

At the end of last season, fans were ecstatic for the future of the team. The team was on fire to finish the year and the kids were playing amazing. The team responded to this hot finish by being almost invisible all off-season aside from trading away Evgenii Dadonov and signing Del Zotto. If this wasn’t enough to dampen the flame of excitement fans had burning, their embarrassing 9 points in their first 19 games has all but extinguished it.

To put the cherry on top, over the weekend the team made the move to waive goaltender Matt Murray, just one year into his 4-year $6.25 million contract, after they traded a second round pick for him last summer.

Someone has to answer for all this and try to ensure fans the team has a plan right? Wrong. Dorion or any member of Senators’ management have not publicly spoken to the media since the team signed Brady Tkachuk in mid-October. The lack of any sort of public acknowledgement to the team’s struggles from management is only compounding the lack of success and raising the hunger for change amongst the fanbase.

DJ Smith can’t be left to the wolves every game and be the only one having to answer for the team’s struggles. Where is Pierre McGuire? It was believed McGuire was brought in as an advisor this summer to help Dorion not only with personnel decisions, but also in dealing with the media, something Dorion has notably struggled with. That has not been the case, as McGuire has essentially been a ghost the entire season.

At this point fans need to ask, are things too far gone for something not to give here? Fans have been calling for Dorion to be fired on and off again for the majority of his tenure. The heat has also been turned up on Smith as his coaching record continues to slip further and further negative. The team has also made a lot of inexcusable mistakes recently that have just become too hard to overlook.

Burying Lassi Thomson in the AHL for the first month and a half of the season in favor of players like Josh Brown in itself is ridiculous. When you look at the broader context and see the same thing happened last year with Artyom Zub it becomes impossible to overlook that clearly the coach has a talent evaluation problem.

Dorion has also made his fair share of mistakes, like trading second round picks for Derek Stepan and Murray and then almost immediately regretting it. As previously mentioned, the lack of bringing in any top 6 or top 4 help this off-season.

As it stands this current executive staff just doesn’t seem capable of getting the team to the next level. The future of the team is not all doom and gloom. They have exceptional talents with players like Brady Tkachuk, Thomas Chabot, Tim Stützle, Drake Batherson, and many more prospects on the way. However Dorion and Smith have shown no ability to be able to properly insulate these players and make the best decisions to put them in positions to succeed.

The team has reached a breaking point and if the organization is serious about being a Stanley Cup contender like Melnyk says they are, then someone who can get this team to the next level needs to be brought in. This current group of executives assembled is just too inept to make it happen here.