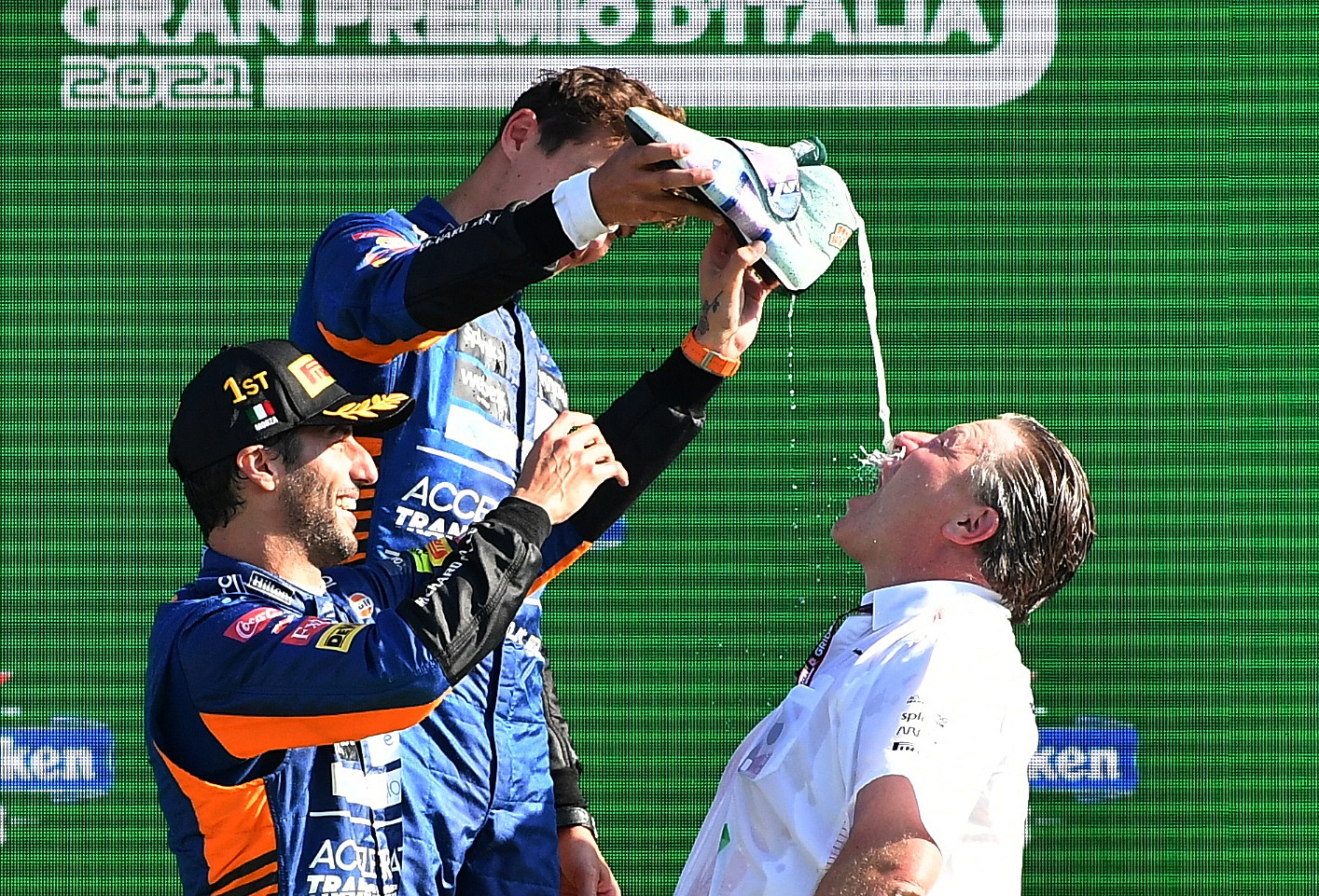 The “Temple of Speed” has delivered yet another exciting race in 2021, and while it did not quite replicate the shock result of last year, it was nevertheless a great weekend for Formula One.

Daniel Ricciardo took the top step of the podium with teammate Lando Norris to his right on the 2nd top spot as the team won it’s first race since Jenson Button won in Brazil at the end of the 2012 season, 170 races ago. The last time the team had a 1-2 finish was even further back at Canada 2010 when Jenson Button finished 2nd behind, a then young, Lewis Hamilton.

This race also marked the 8th F1 win for Daniel Ricciardo, and first since leaving Red Bull at the end of 2018. His last win coming for them in Monaco during the 2018 season. Lando Norris also achieved a career best 2nd place finish, his 4th podium of 2021, and his 5th career podium. Ricciardo also recieved his first DHL Fastest Lap award of the season with a time of 1:24.812 on lap 53, the final lap of the race as well as driver of the day honours for the first time this year. The cherry on top of this weekend for McLaren was that they overtook Ferrari for 3rd in the constructors championship.

The WDC fight took a bit of a backseat this weekend as both the title contenders Max Verstappen and Lewis Hamilton came together on lap 26, knocking both drivers out of the race. The incident came at the turn 1 and 2 chicane as Verstappen tried to go the long way around Hamilton’s Mercedes and at turn 2 Hamilton shut the door on Verstappen, causing him to go over the curb, bang tires with Hamilton, and send Max airborne. The Red Bull then came down on top of the Mercedes, knocking both into the gravel and wrecking both cars. A scary sight to see as the wheel of Verstappen’s Red Bull came down onto the head of Hamilton, however, the Halo once again shows it’s value as the damage to Hamilton himself appeared very minor. Both drivers were able to walk on their own power back to the medical center. Verstappen was given a 3 place grid penalty for the upcoming race in Russia because of this incident.

Mercedes still come out of the weekend with a net positive however as Valtteri Bottas put in a superb drive, starting 19th on the grid because of engine penalties, making his way back up claim the final podium spot and 15 points for Mercedes. In his first race after the news broke that he will be leaving Mercedes at the end of the season, Bottas showed the team that he still has performances up his sleeve, a showing that will surely excite Alfa Romeo fans.

Meanwhile, the other Red Bull of Sergio Perez finished 3rd on the road but was relegated back to 5th after a 5 second time penalty for an illegal overtake of Charles Leclerc. Perez also played a vital role in the final result of the race as he held Bottas behind him and allowed the McLarens to drive unchallenged ahead of him. It is very possible that had Bottas dispatched Perez quickly, he could have overtaken both McLarens and won the race.

The Tifosi were given some positives to cheer about this weekend as well. A strong showing from both Charles Leclerc and Carlos Sainz (finishing 4th and 6th respectively) will give Ferrari fans hope that the cars can compete at high speed, power heavy circuits as well as tight, technical street courses. Despite their biggest rivals McLaren passing them in the standings, they are still very well within reach of reclaiming that position with more positive weekends.

Aston Martin’s Lance Stroll brought home the only points of the weekend for the team, finishing 7th, scoring 6 points. Teammate Sebastian Vettel struggled all weekend for pace and this was clear in the race. He started from 12th on the grid after the sprint race and finshed there as well.

The other home outfit, Alpha Tauri had a dismal weekend. Pierre Gasly was not able to repeat his heroics of winning the GP this year, in fact he only managed 3 laps before the car was forced to be retired. His teammate Yuki Tsunoda did not even start the race due to a brake issue.

Alfa Romeo had a fairly dissapointing race all things considered as they scored no points. Antonio Giovinazzi did a great job in the sprint qualifying to start from P8 on the grid, but fell to P13 by the end of the race. With rumours flying around about the uncertainty of his future in F1 next year, he would have done well to score points this weekend, especially from his qualification on Saturday. Meanwhile, in his second race deputizing for the isolating Kimi Raikkonen, Robert Kubica started from 18th, and managed to move up to 14th. Decent for him.

Finally, Haas brought up the rear again with Mick Schumacher finishing 15th and Nikita Mazepin scoring a DNF. The two of them came together after the safety car restart, sending Mick to the back of the pack and he was unable to recover from there.

In two weeks time, Formula 1 travels to the Olympic Park in Sochi, Russia for round 15 of the 2021 season. This is a track historically dominated by Mercedes, more specifically Valtteri Bottas. Could we see another strong performance from him and by extension Mercedes? Max Verstappen’s 3 place grid penalty will certainly come into play and there are rumours flying that he may take further engine and start from the back of the grid. All of this and more will hopefully make for an interesting race in a fortnight.