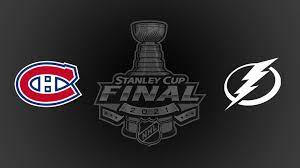 The Canadiens have been underdogs throughout the entire playoffs – they had the worst record among all 16 teams that qualified for the playoffs – but the Canadiens feed off that underdog mentality. They have played extremely well all throughout the entire postseason. The Lightning have a chance to win their third Stanley Cup in franchise history and their second in two years. They can be the first team to do so since the Pittsburgh Penguins in 2016 and 2017.

The biggest storyline to keep an eye on in this series is the Canadiens’ penalty kill, which is operating at a 93.5% efficiency – and has killed 31 consecutive penalties – and the Lightning’s power play which has been operating at an incredible 37.7% efficiency. The Habs have the best penalty kill in the playoffs and the Lightning have the best power play in the playoffs. Special teams will be a huge factor in determining the winner of this series. Whoever has the better unit will likely win the series.

The Lightning can get scoring from everyone on their roster, even defensemen, but rely on their stars to produce the majority of their offense. Nikita Kucherov has five goals, 22 assists, and 27 points; Steven Stamkos has seven goals, 10 assists, and 17 points; Brayden Point has 14 goals, six assists, and 20 points and Alex Killorn has eight goals, nine assists, and 17 points. If these guys get going, the Lightning are extremely dangerous and unstoppable. If these guys get shut down, it will be harder for the Lightning to generate offense. But their depth guys can still score plenty of goals and can be a headache for any defense, which speaks a lot about their talent and depth.

The Montreal Canadiens are drawing comparisons to the 2012 Los Angeles Kings and the 1993 Montreal Canadiens who had a stellar defense, outstanding goaltending, and didn’t score a lot – but had a balanced scoring attack. They are getting scoring from their young guys, like Cole Caufield, who has four goals, five assists, and nine points; Nick Suzuki, who has five goals, eight assists, and 13 points, Jesperi Kotkaniemi, who has five goals, two assists, and seven points; and Tyler Toffoli who has five goals, nine assists, and 14 points. However, they are also getting scoring from their veterans like Shea Weber, Corey Perry, Brendan Gallagher and Eric Staal which has helped this team score enough to win important games. The Habs don’t just rely on a few guys to score; they get scoring from anyone, which makes them that much more dangerous. The opposing defense has to worry about everyone, not just a few all-star players. However, the Habs despite getting scoring from everyone, do not score as often as the Lightning.

Despite the balanced scoring attack, the Lightning score more, get more shots on goal and scoring chances than the Canadiens, and spend more time in the offensive zone than the Canadiens which makes them a better offense. They were top five in goals, shots, and power play in the regular season. Both offenses are excellent, but the Lightning have more talent.

However, the Canadiens have been the better defensive team throughout the playoffs, especially on the penalty kill. The Canadiens have a relentless defense that plays physically, throws the body around, communicates well with each other, forces you to the outside, wins puck battles and they cause a lot of turnovers, especially in the neutral zone. They win games with their defense and goaltending. Their ability to disrupt opponents’ fast breaks in the neutral zone angers teams. It forces teams to move their players further up the ice, which leads to opportunities in transition for the Canadiens. The Canadiens have a good transition game thanks to their great defense and speed.

The Lightning also had a top 10 defense in the league in the regular season and even throughout the playoffs, that is able to prevent a lot of shots on goal, forces you to the outside, causes turnovers, and plays physically, but it has not been as good as the Canadiens’ defense. The Lightning penalty kill operated at only 83%, the Habs have the advantage in that department. They have talent on the back end of the ice though and can shut an offense down.

Also, the Habs have the best penalty kill in the playoffs, killing 93.5% of their penalties. It does not allow opponents to get set up in the attacking zone, it forces teams to the outside which prevents high-quality scoring chances and it causes turnovers to create short-handed chances. The Habs have four short-handed goals in the playoffs, the most in the league, thanks to their stellar counterattack. When their defense does make a mistake or allow a scoring chance, Price is there. Both defenses do play mistake-free hockey and rarely turn the puck over. This helps them win hockey games.

Finally, the Canadiens are 5-1 in overtime these playoffs, the Lightning are 0-3 in overtime in the playoffs. Most of these games are likely going to be very close, so if the Habs can force games into overtime, they could have a bit of an advantage in that department.

Despite the excellent play from the Canadiens toward the end of the regular season, going on a winning streak to ensure they make the playoffs and throughout their entire playoff run, the Tampa Bay Lightning are the more talented and experienced team. They are very good offensively, on the power play, are great defensively, and have one of the best goalies in the league. This team is the defending Stanley Cup Champion for a reason. The Lightning can beat you in a low-scoring defensive game and/or in a high-powered offensive game.

Both teams are very well-coached too, and they can adapt on the fly, but the Lightning’s bench boss John Cooper is the better coach than Dominique Ducharme, behind the bench for the Canadiens.

If the Lightning can score frequently on the powerplay, shut the Canadiens down defensively, get scoring from their stars and depth players, and if Vasilevskiy plays better than Price, the Lightning will repeat as champions.

If the Habs can shut down the Lightning defensively, keep their excellent penalty kill working effectively, continue to get scoring from their entire roster, and if Price plays better than Vasilevskiy, the Habs will bring the Stanley Cup to Canada for the first time since 1993.

Despite the fact that the Lightning are the favourites, I believe the Canadiens will win in seven games thanks to the brilliance of Carey Price. He deserves a ring more than anyone in this league.