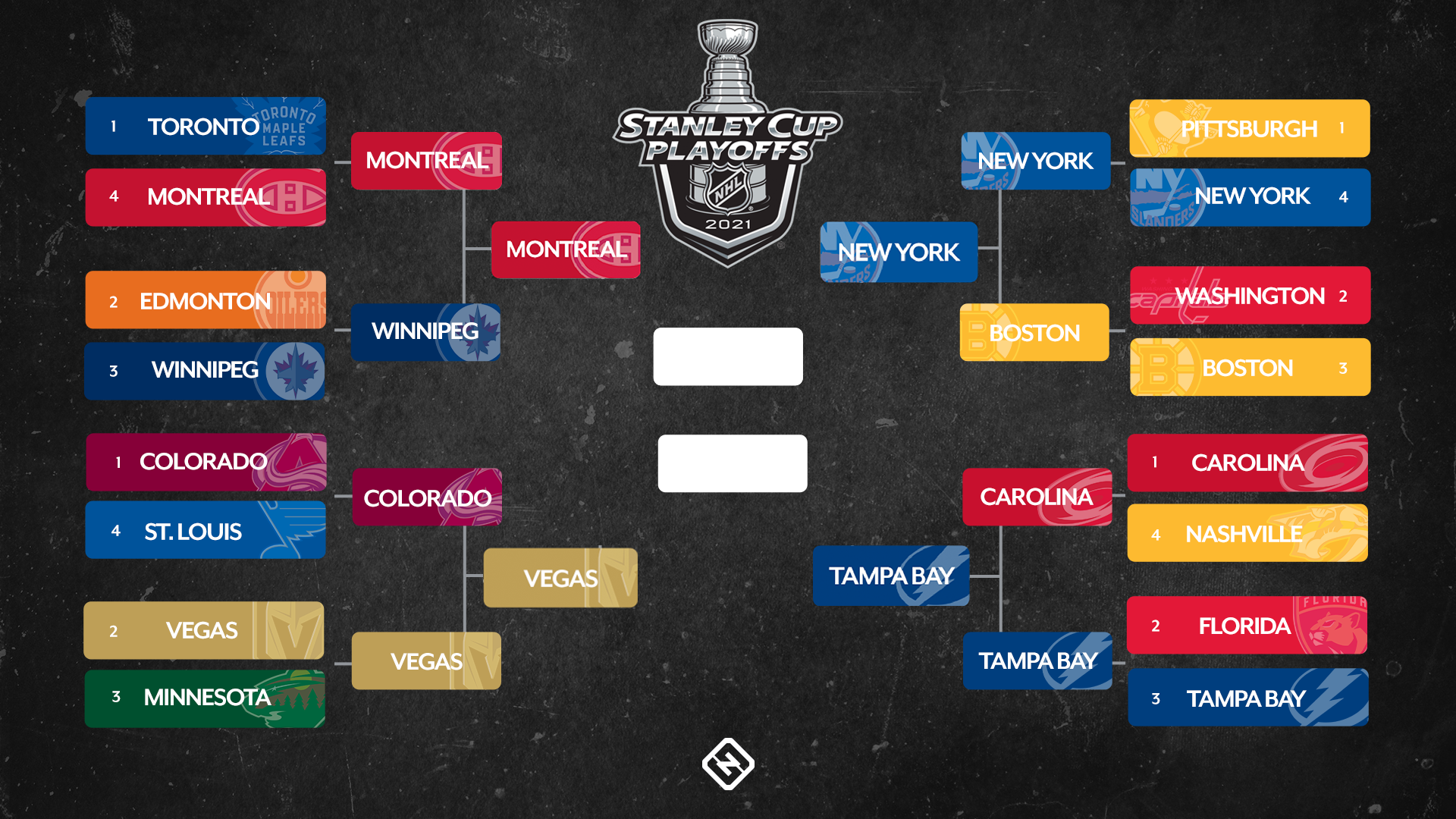 After an exciting second round of matchups, the final four is set. Which teams will move on and get the chance to compete for a Stanley Cup?

Islanders vs Lightning: One of the NHL’s best defenses meets one of the NHL’s best offenses in a rematch of the 2020 Eastern Conference Finals in what is sure to be a very exciting and competitive series. The Lightning were expected by many people to return to the conference finals. They finished third place in a very tight central division, were only five points behind the Hurricanes – who won the division – and had the eighth-most points in the league. They did this without Nikita Kucherov, who was injured all season, Steven Stamkos, who missed the last month of the season, and Victor Hedman who played hurt down the stretch. In the first round, the Lightning relied on their depth, speed, and excellent offensive capabilities to outmatch the Panthers. The Lightning can beat a team in any way. The Panthers – who knew the Lightning could score in bunches – tried to outmatch the Lightning using a fast pace style of hockey to build a lead and force the Lightning to play catch up. The Lightning used their defense to slow the Panthers down and hold their offense under control. When the Panthers’ offense got slowed down by the Lightning, the Panthers tried to slow the Lightning down by playing solid defense and controlling the pace to win close games. But the Lightning relied on their scoring to put them away. Against the Hurricanes in round two, their big names led the way offensively, their defense played well and Andrei Vasilevsky stood on his head, stopping 94% of the shots he faced, allowing only nine goals in the entire series. Nikita Kucherov has been amazing for the Lightning, leading the NHL with 18 points in the playoffs. The Lightning are very talented all over their roster. They can shut you down defensively, Andrei Vasilevsky is almost unbeatable when he is on his game and they have elite offensive talent all over their roster. They have depth, they are not made of just a pair of superstars. Their postseason offense matches well with their regular-season offense where they averaged 30 shots a game, scored 3.27 goals per game, and had the second-best power play in the NHL converting on 26.07% of their chances. The Islanders are a different team. They have a lot of talent on their roster. However, they are not so much of an offensive powerhouse like the Lightning. They do have some big names like Matthew Barzal, Anders Lee, and Kyle Palmieri who can score – they are top 15 in the NHL scoring 2.93 goals per game, 29.15 shots per game, converting on over 20% of their power plays – but they rely on their defense to shut down their opponents and control time of possession and the pace of the game. In the regular season, the Islanders were the second-best defensive team in the league. They allowed only 2.23 goals per game, 28.39 shots per game and they only allowed 22 powerplay goals against, killing 83.70% of their penalties, second-best in the NHL. They caused turnovers, controlled time of possession, and used their speed, strong forecheck and backcheck to wear opponents down. They play a mix of zone and man coverage to limit opponents’ offensive zone time and scoring chances. They keep everything to the outside, are physical, and win a lot of loose puck battles. Not to mention, they have two very good goalies. The Islanders are the first team in a while to have two goalies win four games in a seven-game series for them in the playoffs. Ilya Sorokin played well in round one, Semyon Varlamov played well in round two. This will be a close series. The Lightning have a strong offense so will the Islanders be able to shut them down? The Lightning have a very good powerplay, will the Islanders’ excellent penalty kill unit shut down the Lightning powerplay. Will the Lightning offense be able to overcome the strong Islanders’ defense – a feat that the Bruins could not accomplish despite having a lot of talent on their roster. Which team’s goalie will be better? These are all keys to victory in this series. If the Islanders can play good defense that limits the Lightning’s scoring chances, if they can control possession time, if they play physical hockey, win puck battles while not turning the puck over a lot, they can upset a very skilled Lightning team and advance to the Stanley Cup Finals. If the Lightning can find ways to overpower the Islanders’ defense with different schemes and personnel, if they can get scoring from not only their superstars like Steven Stamkos, Nikita Kucherov, Brayden Point, but their depth guys like Alex Killorn, Anthony Cirelli, Tyler Johnson, and Patrick Maroon among others and if they can outmatch the Islanders’ strong penalty kill with their stellar powerplay (they convert on over 26 percent of the power plays, second-best in the league) the Lightning will have a chance to win back to back Stanley Cups. Both teams are also well-coached, Bruce Boudreau for the Islanders and John Cooper for the Lightning both have extensive playoff experience, have both won a Stanley Cup, and can both make adaptations to give his team an advantage in a close game. This will be a close and entertaining series, but I believe the Islanders win in seven games, thanks to their excellent defense, depth, and penalty kill.

Golden Knights vs Canadiens: Down go the President’s Trophy winners. The Vegas Golden Knights used their stellar speed, depth, and offensive talent to overpower and upset an excellent Colorado Avalanche team in six games. The Golden Knights are built for the playoffs, it seems, making their third conference finals in four seasons. They have a lot of talent on their roster and were expected to contend for the Stanley Cup at the beginning of the season. They are halfway there. On the other side of this matchup, the Montreal Canadiens proved all the doubters wrong and swept the Winnipeg Jets who were coming off a sweep of the Edmonton Oilers in round one. Carey Price was excellent for the Canadiens and the Canadiens played solid defense, limiting the Jets’ offensive chances, only surrendering six goals in the entire series. Meanwhile, the Canadiens were great on offense, getting scoring from all four lines, registering 14 goals in the series. There is no doubt that the Golden Knights are the heavy favourites in this series and will have home-ice advantage in the series, however, the Canadiens were the underdogs against the Jets as well and we all know how that series went. Both of these teams have played phenomenal hockey in the playoffs, winning a seven-game series in the first round and easily defeating their opponents in the second round. The Canadiens and Golden Knights both have great goaltending. Carey Price has been phenomenal for the Canadiens with an 8-3 record, a 1.97 GAA and a very impressive .935 save percentage, and one shutout. Marc Andrei Fleury has been excellent for Vegas too, with an 8-4 record, a 1.91 GAA, an excellent .923 save percentage, and one shutout. Both teams have a phenomenal defense too. In the regular season, the Golden Knights were the best defensive team in the league, allowing only 2.18 goals per game, 27.27 shots per game, and only allowed 19 power-play goals to opponents on 144 chances, killing a whopping 86.61% of their penalties, best in the NHL. They play a smart, physical style of defense that controls the pace of the game and time of possession. They move the puck well and tire out the opposing offense with their speed and passing skills. They are physical, are not afraid to win puck battles, they can cause a lot of turnovers and their transition game generates a lot of scoring chances. The Habs were a middle-of-the-pack team defensively in the regular season but have turned it on in the playoffs. They are the best remaining team defensively in the final four. They are allowing only 2.18 goals per game, 30.82 shots per game, and have killed 28 of their 31 penalties, a whopping 90.32 percent effectiveness on the penalty kill, which is the best in the league. Sure, the Habs do give up a lot of shots, but most of them are not really high percentage scoring chances because of their excellent defense that forces turnovers, wins puck battles, forces opposing players to the outside, and is smart with the puck. Also, the Canadiens are very good at controlling the pace, especially on the penalty kill which is why their penalty kill unit is so good. They block passing lanes, shots, and force turnovers on the penalty kill which leads to opportunities in transition which explains their four shorthanded goals in the playoffs, the most in the league. On offense, despite all the big-name talent that the Golden Knights have like Max Pacioretty, Mark Stone, Jonathan Marchessault, William Karlsson, and Alex Tuch among others they have a well-balanced team that can get scoring from all four of their lines. They have 16 players with at least one goal and 20 with at least one point. The Habs have 12 players with at least one goal and 19 with at least one point. Both teams can get production from everyone which is essential in a long playoff series to avoid overworking your top line. Not to mention, both teams’ power plays are amazing – but the Habs have the much better penalty kill, which can be an advantage in a close series. Last year, the Dallas Stars defeated the Golden Knights in the Western Conference Finals with great goaltending, a great penalty kill unit, and by keeping everything to the outside to limit Vegas’ offensive scoring chances. The Habs are capable of doing that with their excellent goaltending, penalty kill, and physical defense. The Golden Knights are the slightly better offensive team and will get their opportunities. However, if the Habs get scoring from everyone, play great defense, limit the Golden Knights’ chances, keep everything to the outside, play physical and win puck battles, they can frustrate the Golden Knights. If the Golden Knights can keep up their success on the powerplay, get a ton of scoring chances, get scoring from all four lines, play mistake-free hockey and solve Carey Price – which isn’t easy – they can build leads and control the game and time of possession with their solid defensive core. This will be a close series as both rosters are talented and both teams are very well-coached with Peter DeBoer in Vegas and Dominic Ducharme in Montreal. However, I am going with the upset pick. I have the Canadiens in seven games and Price will be the difference.