History of UFC in the Nation’s Capital – Part I 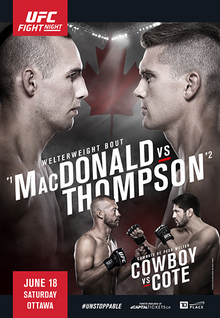 The Ultimate Fighting Championship hosted an event in Ottawa for the first time ever in June of 2016.

Here is a look back at all the excitement that went on in UFC’s first trip to the Nation’s Capital.

A lackluster main event and number one contender match that saw the #1 ranked Canadian dominated by the #2 ranked Wonderboy. Thompson would then go on to draw then welterweight champion Tyron Woodley and lose in an immediate rematch. Stephen Thompson has yet to receive another chance at the elusive UFC gold.

This was Canadian Rory Macdonald’s 14th and final UFC fight (9-4) before moving on to test the open market. He signed with Bellator (2-2-1), won the welterweight title, defended it twice and challenged for the middleweight title. He has since left Bellator and signed with the Professional Fighters League (PFL), but pulled out of the most recent PFL season due to a heart condition.

Patrick Côté is a Canadian MMA legend, competing in UFC from 2005 – 2010 and again from 2012 – 2017. The Rimouski native has competed 21 times in UFC (10-11), second to the one and only Georges St-Pierre (ever heard of him?) for the most fights for a Canadian fighter under the UFC banner. His UFC career has included bouts against the likes of Tito Ortiz, Chris Leben, Anderson Silva and Stephen Thompson.

Steve Bossé played semi-professional hockey in Ligue Nord-Américaine de Hockey, where he was known as an enforcer nicknamed “The Boss”. He managed three appearances in UFC and a respectful 2-1 record.

Olivier Aubin-Mercier was recently released after going 7-5 in a 12 fight UFC career. He has since signed with the Professional Fighters Association and will make his debut later this year.

Canadian Elias Theodorou took on UFC fighter/commentator extraordinaire Sam Alvey and cruised to a relatively easy decision victory. Theodorou who was eventually ranked #13 in the middleweight division has since been released from the UFC for what many believe is because of his perceived ‘boring’ fighting style and his advocacy for medical cannabis. He has since won his first fight outside the UFC and became the first MMA fighter and professional athlete in history to receive a sanctioned exemption for medical cannabis.

Markos is the most experienced Canadian female fighter. She missed weight for this fight, her fourth fight in the UFC. She has rotated between wins and losses throughout most of her 16-fight UFC career. Currently, she is on a 3-fight skid but has a chance to redeem herself on May 1st as she takes on Brazillian, Luana Pinheiro. Markos needs a win, with an overall record of 10-10-1 she is at risk of getting released.

The People’s Champ Colby Covington fought for the third time in his UFC career, coming off his first career loss. This win started Covington’s rise to fame and his 7-fight win streak. This includes notable wins over Damien Maia, Robbie Lawler and Rafael Dos Anjos. This would lead to a fight for the welterweight championship where he was defeated by current champion Kamaru Usman.

Bonuses of $50,000 are awarded to the selected outstanding performances, at every UFC event.

I was personally unable to attend this event and I was devastated. I was lucky enough to attend the first ever event in Canada; UFC 129 in Toronto at the Rogers Centre (SkyDome) and UFC’s second rendezvous to Ottawa in May 2019. I have heard some stories from the first meeting between our Nation’s Capital and the Ultimate Fighting Championship:

Overall, a strong debut for the Ultimate Fighting Championship in Canada’s Capital Region. The fight card was littered with future title challengers, some of the best/longest tenured Canadians to ever enter the octagon and a solid mix of exciting fight finishes.

To the casual UFC fan, it may have seemed like a weak card or a less than exciting night of fights, to that I would disagree.

Fight night events like this at smaller venues are lucky to even get one meaningful fight (related to rankings or title implications), this card had a #1 contender fight for the welterweight championship, some highly touted up and comers and a light heavyweight tilt with a hockey enforcer from Quebec!

Typically, an event like this is a test, can the Ottawa market host a profitable UFC event?

Did Ottawa pass the test? I think the answer to that is a resounding YES!

I do hope all fight fans remember it is a privilege to have the UFC come to your city, as much as it is a privilege for UFC to receive your hard-earned dollars that you put towards tickets, time and merchandise. They try with every fight card to guarantee a night filled with first round finishes and although this fight card had many finishes and exciting fights; it is not always the case.