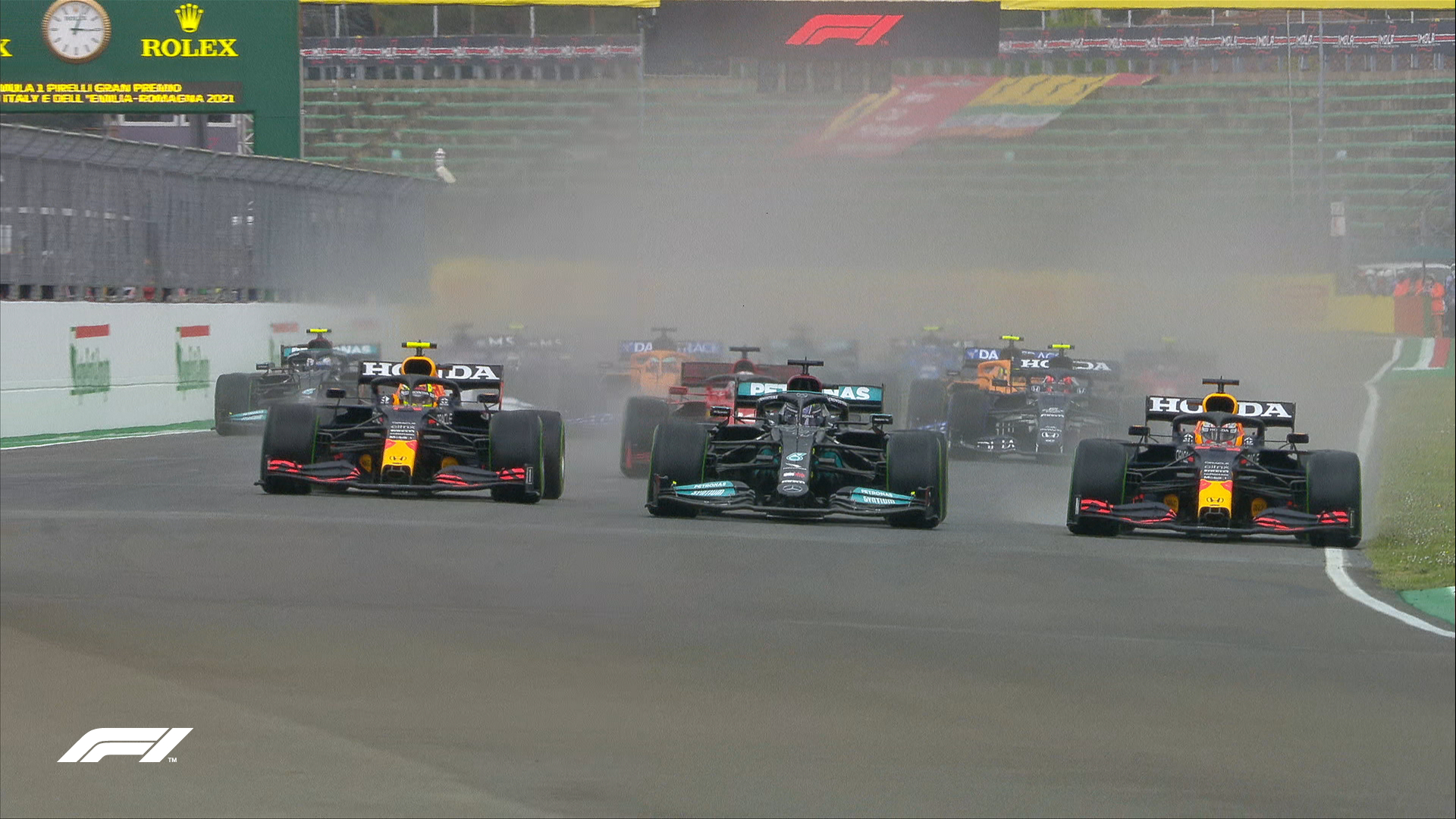 After a two-weekend break following the exciting Bahrain Grand Prix which saw a mammoth battle between the Mercedes of freshly-knighted Sir Lewis Hamilton and Red Bull’s Max Verstappen, F1 was back racing in a beautiful part of the world at the historic Imola circuit in Italy. The drama began before the light went out when rain began to fall about 30 minutes before the start of the race. This caused two-time world champion Fernando Alonso to spin and break his front wing on the way to the grid. Also, trouble began for Aston Martin with a brake fire on the car of Canada’s Lance Stroll which caused them to change the brakes on both Stroll and his teammate four time world champion Sebastian Vettel’s car, with the latter being forced into a pitlane start because of the change. It would not get better for Vettel who has had a torrid start to his career at Aston Martin after five years at Ferrari.

On the grid, seven-time world champion Lewis Hamilton started on pole with his main championship rival Max Verstappen starting third after being out-qualified by his Redbull teammate Sergio Perez. With the rain easing up, all the drivers started on the intermediate tire except for the Haas’ and Pierre Gasly who started on the full wet tire.

The lights went out and Verstappen had an incredible start where he was side-by-side with Hamilton going into the first chicane. Verstappen won the battle with the two rivals millimetres apart going into turn 2 with Hamilton being forced onto the curbs which ended up causing some minor damage to his front wing but he was able to continue at a good pace but wasa few tenths slower than Verstappen as the Dutchman sped away.

The first Safety Car came out on Lap 2 with Toronto’s Nicholas Latifi retiring from the race after coming together with rookie Nikita Mazespin (sorry Mazepin). Mazepin has had a rough start to his Formula 1 career with many spins occurring which has amused many F1 fans.

The race resumed on Lap 7 where Hamilton attempted a move on Verstappen but was unable to pass with Leclerc staying close behind in third place.

Then on Lap 16, Mclaren teammates Daniel Ricciardo and Lando Norris swapped places after a call from the pitwall to let Norris go by as he was faster than Ricciardo.

Also, Hamilton’s Mercedes teammate, Valtteri Bottas had a difficult race weekend where he qualified 8th compared to Hamilton’s 1st and then was stuck behind a train of cars that was behind Pierre Gasly who was eight seconds off the pace because he was on the tire that is used for treacherous rainy conditions (which it was not).

The track was finally ready for the dry tyres at around lap 27 when race leader Verstappen pitted for the Medium tire. Hamilton attempted an overcut to try to pass his rival in the pits but to no avail and stayed in second place.

The turning point of the race occurred on Lap 32 where Mercedes had its single worst lap since the coming together of then-teammates Nico Rosberg and Lewis Hamilton on Lap 1 of the 2016 Spanish Grand Prix. First, Hamilton was attempting to pass the back markers who had blue flags (Blue flags are shown to drivers who are being lapped and they are obliged to let the leaders through) when he lost control on a damp patch going into turn 7 and slid off the track and very nearly out of the race. Hamilton then had to pit to repair the car after being stuck for awhile in the gravel. A few moments later, Hamilton’s teammate Bottas tangled with the Williams of George Russell which was a massive crash with those two drivers blaming the other for the incident. This brought out the red flag which paused the race and forced all the cars into the pitlane as the debris was cleaned up.

After everything was cleared up, the lapped cars were allowed to have one lap around the track to get back onto the lead lap which was good news for Hamilton who was a lap down after his incident. After everyone except the Haas cars (who were two laps down) was back on the lead lap, the field went back out on track to restart the race. All the drivers were on Medium tyres except for the Mclaren boys who were on the Soft tires.

Verstappen nearly lost the car at the penultimate corner but was able regain control and promptly pull away from the pack at the restart.

Norris with his Softs was able to snatch P2 away from the Ferrari of Charles Leclerc and even had a look at the Redbull of Verstappen but to no avail.

A few laps later, penalty-hit Sergio Perez spun entering the Villeneuve chicane which dropped him from fourth to fourteenth.

The hunt for Sir Lewis to get valuable points for the Championship began right away as the Mercedes driver quickly passed the Alfa Romeo of Kimi Raikkonen and Canada’s Lance Stroll. A few laps later, he would quickly dispatch Ricciardo for fifth place and he trailed the two Ferraris of Carlos Sainz and Charles Leclerc who had Lando Norris in front of them in second place. Hamilton was unable to pass Sainz until Lap 50 with a simple pass down the long straight with DRS.

Hamilton then set his sights on Leclerc who held him off brilliantly until Lap 55 where Hamilton breezed passed the Ferrari down the straight and got himself back up to an unlikely podium spot after his chat with the wall on lap 32.

However, Hamilton wanted to get back to his position that he had before his accident and he set off to catch Lando Norris who was looking to obtain his highest ever finish in Formula 1 which would have been second.

After many looks, three laps from the end, Hamilton passed Norris around the outside of the corner to get himself back up to an unlikely second place finish.

Finally, after two action-packed hours of racing, Red Bull’s Max Verstappen took the Grand Prix victory ahead of Lewis Hamilton who took the bonus point for fastest lap of the race, with Lando Norris finishing on the podium for the second time in his career.

For Canada, Aston Martin’s Lance Stroll finished 7th on the track but was classified as 8th after a post race five second penalty was handed to him after passing the Alpha Tauri of Pierre Gasly. The other Canadian, Wiliams’ Nicholas Latifi did not finish after crashing out on Lap 2.

In further drama, after the race, Alfa Romeo driver Kimi Raikkonen who does this for a hobby, was handed a 30-second time penalty after an infringement on the red flag restart which dropped him out of the points. Bwoah.

Climax of the Weekend

These two drivers are beginning to develop a rivalry with each other after Russell showed up Bottas at last years Sakhir Grand Prix after Hamilton was forced to miss the race due to a positive covid test and Russell took his place at Mercedes for the weekend. With George Russell being apart of the Mercedes family as he is one of their junior drivers, he is looking to make a good impression on the Mercedes as to why he deserves a seat there. Valtteri on the other hand wants to prove to Mercedes that he is still a capable driver that is worthy of the coveted Mercedes seat. With both seats in 2022 not contracted yet as Hamilton only signed a 1 year deal in the winter, it is possible that these two could be not only fight for the Mercedes second seat, but if Hamilton walks away, there is a possiblity of them being future teammates. This crash could be a jumpstart to these two being hated rivals with each other. It is something to keep an eye on in the remaining 21 races.

As to who’s fault it is, it is tough to give one driver more blame than the other, especially when travelling at 300+km/h but I believe Russell is a little more at fault then Bottas because Bottas keeps a straight line down the straight, but the track curves a little which caused Russell to get a wheel on the grass and crash. It is a racing incident but costly to both driver’s races.

Formula 1 will return to Portimao in Portugal in two weeks time on May 2. For now rest easy and recover after an action packed weekend at Imola and see you in Portimao next time out!