From one rebuilding team to another, does a hefty price to acquire Jack Eichel make sense for the Ottawa Senators? 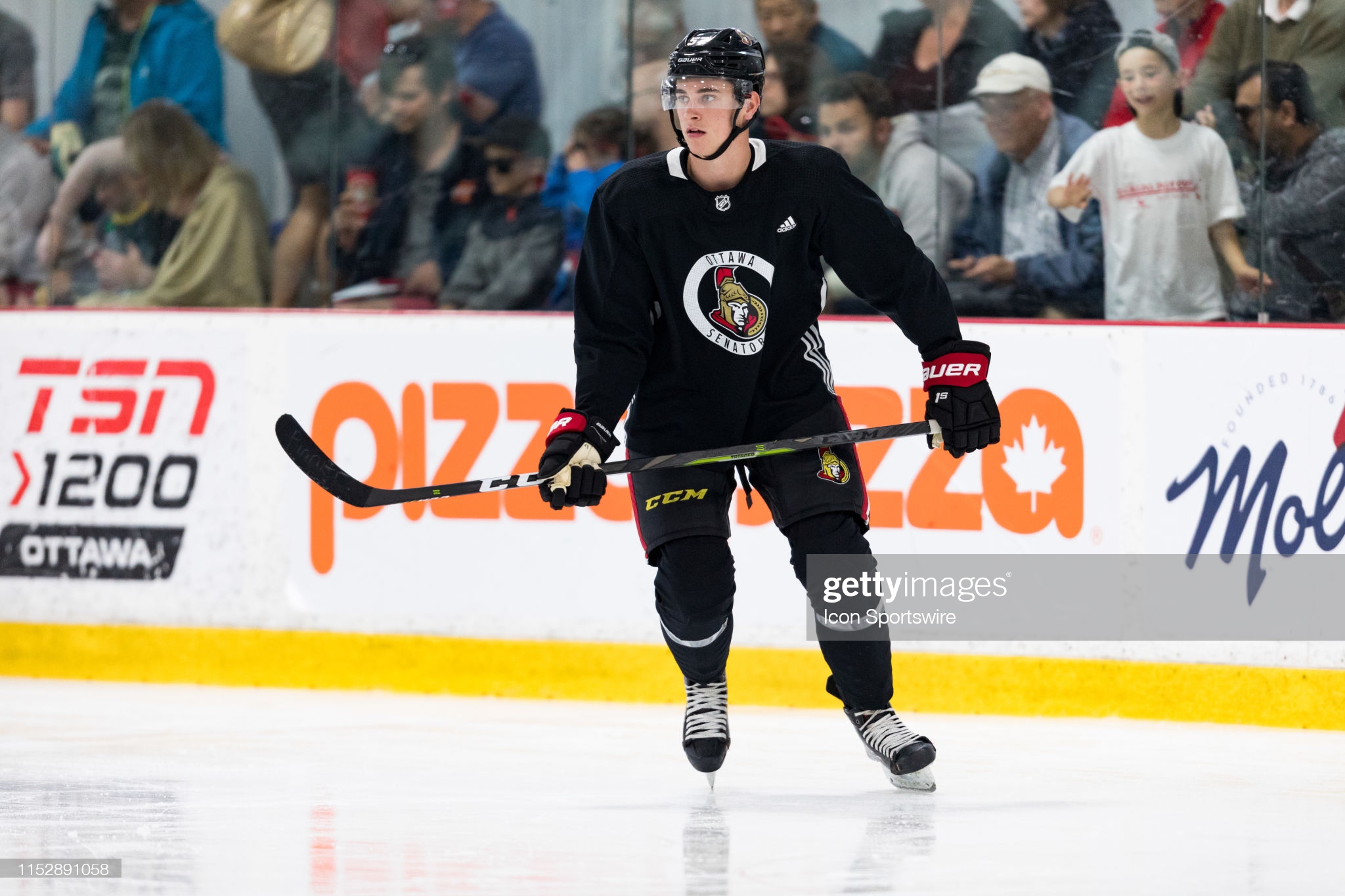 In a year where the Ottawa Senators are once again penciled to finish near the bottom of the standings, I would’ve never thought Jack Eichel would be the name circulating town to be arriving in a trade.

Jack Eichel is clearly a star number one centre in this league. Ever since having his name called in 2015 by the Buffalo Sabres, Eichel has proven his worth with his prolific production numbers in Buffalo. A team like the Senators have their own mix of centres, but if Eichel joined the team tomorrow, he would immediately become the face of this franchise alongside Brady Tkachuk, Thomas Chabot and Tim Stützle. There is certainly more talent to this team next to those three names, but you get my point here.

What would an Eichel trade entail from the Senators’ perspective? Well, you’re probably looking at losing a key prospect in their development stages right now.

Let’s dive into this further, yes?

Jack Eichel to Ottawa, a magical sight for a team that’s already rebuilding

In a perfect world, Eichel would bring an incredible amount of skill to this Senators lineup. Not only would he boost the rebuild, but Eichel would also be the best forward on this current roster from the moment he arrives. His production value alone is something that Ottawa desperately needs to shift into the next gear in their rebuild.

Pierre Dorion is known for being aggressive around big names when it comes to trade talks. His last splash was Matt Murray, who he acquired in the fall before signing him to a long-term deal solidifying him as the Senators’ new number one guy. Before the Murray trade, it was probably the Matt Duchene trade which quickly went south for the Sens.

All of this to say, the GM kicking tires on Eichel wouldn’t shock me in the slightest bit.

Trading for Eichel would immediately entail the Senators losing a key prospect or even someone on their current roster right now. Here’s what I think a potential trade could look like in acquiring Eichel. I’ll lay the foundation down and then talk about if I would do this as GM Pierre Dorion or not.

To Ottawa: Jack Eichel + Whatever else comes along with it. Eichel is the star here.

Deal or No Deal?

Looking at a trade like this can be stressful if you’re an Ottawa Senators fan. You’re still in the midst of your rebuild and you’re not too sure what the future holds. Although, I think a trade like this should make Dorion hang up the phone.

For as impressive as Eichel is, and the tremendous amount of needed skill he’d bring to this team which isn’t even worth debating, I’m not sure if I support the narrative of giving up Shane Pinto. He just turned 20-years-old in November and he’s lighting the lamp at the University of North Dakota right now. In 22 games, he’s scored 28 points, tying his previous year’s totals from his freshmen season. He’s bound to break this milestone within the next few games I would think.

I don’t think, I KNOW that Eichel would speed up the rebuild, but I wonder just how hard Ottawa needs to step on the gas pedal. If this team stays on track, they should be in the playoff mix in a couple of years. They’re already flourishing with their talented forwards this season. Drake Batherson has proven he can be a legitimate NHL winger, Tim Stützle is doing better than some expected on the scoring sheet and Brady Tkachuk is still his old self. This is why I question the idea of this team speeding up their rebuild if it means losing valuable assets in the process.

Sure, having Jack Eichel on this team would bring lots of joy into Sens land, but trading for a player like Eichel also means you’re giving up a quality asset too. You’ve gotta weigh both sides to see if one end is tipping more than the other.

Even if Pinto comes over to the struggling Belleville Senators after his season wraps up, he can still get some crucial ice time and the Senators will see what they have him in even more so. By this time next season, he could even be a centre in the lineup that sees a healthy amount of TOI on a consistent basis. Pinto seems to have the skills of being a full-time player one day, it’s up to Ottawa to decide if they want to play the waiting game or not.

If you were to ask me, Jake Sanderson is the player you should feel more jittery about giving up in a deal involving Eichel. Sanderson impressed at the WJC in December and he was only drafted five months ago with the Senators’ fifth overall selection. Not to mention, it seems like he’ll be adding some needed depth on the left side of the Senators’ blueline.

For as much as Sanderson isn’t sought out to be the next Thomas Chabot offensively speaking, since when did having a defencemen who’s solid in his own end ever hurt anybody? If anything, the Senators would greatly benefit from having another player like this on their blueline. Through 16 games in his freshmen season at UND, Sanderson has scored 11 points as an 18-year-old. He’s still a raw prospect that has lots of work left ahead of him. Although, some predict he may be in the lineup as early as next season for the Senators.

Trading a guy you drafted in the top five just a few months ago is usually not a great look. Even for the type of player Ottawa would be getting in return, you should probably hold your horses in this instance if you’re Pierre Dorion. You know that your forward group will be clicking soon enough with further additions, but you’ve gotta think about how the blueline will look when you’re finally ready to score five goals on your opponents every second game. We’ve seen teams in the NHL load up on their forward groups and their defence crumples like a cheap suit when it’s time to park the bus.

All we know about Sanderson is that he plays on the same team Pinto does and he’s looked quite good so far in his early NCAA career. Having him behind a guy like Thomas Chabot as early as next season would be delightful. Not only would it take some of the workload off of Chabby, it would also give Sanderson a handful of minutes for this team. You’ve gotta know when to hold em and when to fold em.

No thanks. If you think the Senators should sacrifice an already established roster player to a trade involving a blue chip prospect, I’m not sure what else to tell you besides how awful of an idea that is.

Trading a player like Pinto or Sanderson is something you can live with (I still don’t think it’s worth it in the long-term), but losing a player like Drake Batherson, Brady Tkachuk or even Tim Stützle is nothing short of ludicrous.

The Senators have finally been able to string along a healthy batch of forwards and losing any one of those three names would set them back for quite some time. Addressing a weakness by giving up a strength usually doesn’t go your way in a trade. The Senators must realize that if they engage in trade talks for Eichel.

Have we not learned our lesson from the last time Ottawa did this? Because if memory serves me right, the last time Pierre Dorion traded his first-round pick before the draft, it ended up in Matt Duchene coming to Ottawa and highly-touted Bowen Byram fell into the Colorado Avalanche’s lap.

If the Senators ever do get an Eichel deal worked out, the pick should indefinitely be lottery protected, especially for a team that isn’t out of the woods yet. While the deal would surely include a pick, it would be crucial for Dorion to create a safety net around it just in case things go for the worse again. Another idea would be Pierre Dorion lottery protecting the 2021 pick, and if Ottawa does use it this year, they’d have no choice but to forfeit their 2022 selection to the Sabres next year.

I vote for just not doing this at all. The thought of it is already making me anxious because of the history that surrounds it.

At the end of the day, I can only express my own opinion on here so much. Even if I don’t believe trading for Eichel is smart due to the huge price Ottawa would pay for him, Dorion calls the shots in this scenario.

Do I think the price might be too high? Yes. Does Pierre Dorion? We shall wait and see. Like I said, for the first time in a long time, it seems like the Senators finally have this rebuild under some sort of control. Now isn’t the time to be trading important players away just for one star in return.

Now, I might be opposed to an Eichel deal due to the pieces going back the other way being too pricey, but I understand Dorion having to listen in on offers. I would expect nothing less from a general manager in the NHL. While I understand the idea of him doing his due diligence in listening to what Buffalo has to say, I’m still not sold on if the timing is right for a deal like this to go down.

Maybe another opportunity like this will come along in another big name being on the market. The NHL is full of surprises and Ottawa could be the next team up to the plate. Only time will tell if they’re going to swing and hit a home run.